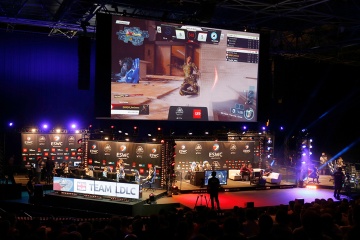 OK, so you've got your rig, your headset, your fancy gamer chair and a lot of fast-twitch muscle memory. Where do you go to earn your stack of cash? Well, a surprising number of places, as it turns out. We've listed here a few of the 800-pound gorillas in the eSports jungle:

Begun in 2003 and rooted in early Paris LAN parties, Electronic Sports World Cup (ESWC) is still kicking, and it offers some of themore unusualgames on the eSports scene. ESWC is also known for offering custom levels to its competitors in such games as the racing series "Trackmania" [source: PC Mag].

As the maker of some of the longest-running tournament games in eSports, including "World of Warcraft" and "StarCraft," it's perhaps only appropriate that Blizzard hosts one of the major eSports events, BlizzCon, each year as a venue for both casual and professional gamers. Blizzard has eSports circuits for several of its major games, including the seasonal Heroes of the Storm Global Championship Circuit, kicked off in 2016 with a $4 million total purse; the massive Hearthstone Championship Tour, culminating in a $1 million championship; the StarCraft II World Championship Series, bumped up to a $2 million Blizzard-sponsored prize pool in 2016; and the $500,000 BlizzCon WCS Global Championship. That's all according to David Gordon, PR manager for Blizzard Entertainment, who announced in August 2016 that the company will also host the Overwatch World Cup, an international exhibition for nominees, pros and locals.

For about a decade, the Intel Extreme Masters tournament has held competitions around the world in various games. Its 2015 (Season 9) tournament focused on "StarCraft 2" and "League of Legends." IEM brings top regional players and fan favorites from around the world to compete in its championship, which in 2016 offered a $100,000 prize pool.

Run by "Dota 2" maker Valve, The International has seen steady growth since its inception in 2011, and now serves entertainment to thousands in meatspace (aka the real world) and hundreds of thousands on the interwebs. Its total prize pools reach into the tens of millions of dollars, funded in part by player purchases.

A blurry line separates many tournament events from the expos and conventions with which they exist in a kind of symbiotic relationship. Think of Dreamhack as essentially a LAN party writ large (it holds the Guinness World Record for the world's largest), combined with an eSports event and computer festival. Dreamhack runs the gamut from casual to hardcore gamers, from traditional tournament games to sports and music games, and from hosted tournaments to BYOC (controller) get-togethers.

And the list goes on. Drill down far enough, and you'll find something for everyone. The more esoteric the game, the wilder the competition might be. Just check out the World Pump Festival, which celebrates the "Pump It Up" dancing game, and see if we're wrong.

I'm old enough to remember video arcades, and I'm of sufficient vintage to recall the joy of playing "Doom Deathmatch" over serial link — and the agony of dialing in across country via a 14.4 modem to play "Quake." I remember LAN parties and tournaments played for beer money, and I remember wasting hours of rare game time on solving basic network conflicts and other technical problems. All of which is just a long way of saying that in video games, as elsewhere, infrastructure is everything.

Also, get off my lawn.