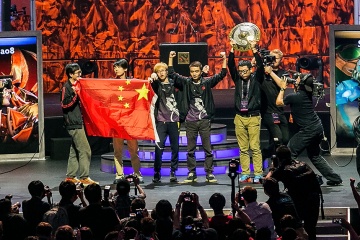 Members of Newbee pose onstage after their win at the 2014 International Dota 2 Championships.
Suzi Pratt/FilmMagic/Getty Images

Tournaments large and small exist for all kinds of games, and we'll discuss the major competitions in the next section. First, let's take a quick look at the categories of games that dominate eSports, and some of the standout examples of each.

Fighting games such as "Street Fighter," Nintendo's "Super Smash Bros." series and "Marvel vs. Capcom" pit two players or tag-teams against each other, mano-a-mano, in the virtual squared circle. The games play like mixed martial arts, emphasis on the "mixed": mixed with superpowers, with magic and with Saturday-morning kung-fu powers. Players use a combination of positioning, fundamentals, timing and special moves to take down their opponents, flowing from finicky ripostes to devastating combos. Fighting games have been a staple of arcade battles and couch-based contests from the beginning.

First-person shooters (FPS) focus on using weapons and tactics to accomplish strategic goals, which can range from base defense to killing as many people as possible. They can range from team-based combat, as in the "Battlefield," "Counter-Strike" or "Call of Duty" series, to individual arena-style battle royale competitions, as represented by games like "Quake," "Unreal Tournament," "Halo" and "Overwatch."

Multiplayer online battle arenas (MOBAs) combine the individual achievement of FPSs with the strategy and tactics of RTSs. More importantly, by shifting the RTS action to a smaller number of more powerful units — generically called Heroes, each played by a single player — they turn that struggle into a chance for team play. The RTS link traces back to the birth of the "Dota" franchise, which grew out of a 2003 fan mod of "Warcraft III: Reign of Chaos" called "Defense of the Ancients" (DotA, later just called Dota). Valve released its own version, "Dota 2," in 2013, four years after Riot Games put out its Dota-inspired "League of Legends," the other big name in the MOBA game.

These four categories cover the waterfront, but the list is far from exhaustive. If enough people like a game, someone is bound to build a tournament around it, whether your preference runs to popular sports franchises like "FIFA," computer-based card games like "Hearthstone" and "Pokémon," or even dance games.