The Road to Recognition 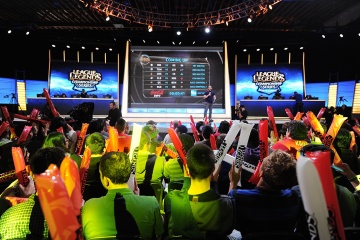 Colosseum crowds — and the sponsors and cash that flow from them — remained elusive in the pro gaming's early days. At first, technical problems, including a lack of network code or infrastructure needed to link games fairly and effectively, posed the greatest single hurdle. But as the dance of client and server fell into step, and as the internet spread across an ever-growing galaxy of devices, the major barrier shifted from a practical question to a matter of product awareness and access.

Players facing off against one another wasn't enough to make a sport. For a pastime to achieve that kind of status, people must play it, understand it and absorb its very essence into their twitchy finger bones. To make for good viewing, older video games needed to achieve such widespread adoption and familiarity as to pose no barrier to entry. Viewers needed to grasp the fast-paced action almost intuitively, and the "casters" who provided play-by-play and color commentary needed something interesting and informative to say.

Venerable fighting franchises like "Street Fighter," or the granddaddy of all competition real-time strategy (RTS) games, Blizzard's "StarCraft" franchise, sported the right combo of cred and history, earned over years of play and replay, sequels and modifications (aka "mods"). Against such a track record, newer games needed to compete by offering cleaner play, better visuals, novelty and something even more important: accessibility. In short, they needed the video game equivalent of stickball.

While some games still charge up-front purchase prices, many of these younger tournament games glommed onto the free-to-play (FTP) model as a means of expanding their reach. Instead of a $40 to $70 price tag up front, these games make money via heaps of small transactions, chump change that pays for perks like power-ups, alternative visuals or expanded content. With the advent of FTP games designed specifically to pit teams of players against one another, and with built-in ladder and leaderboard standings, games like "Dota 2" ("Defense of the Ancients") were tailor-made for eSports.

As pro gaming has expanded into a global phenomenon, it has encountered another major hurdle: How to recruit teammates from foreign countries. Other sports already enjoy a special immigration status that allows foreign players to join U.S. teams. As of May 29, 2013 — when player Danny Le's P-1 work visa application was approved, enabling him to join his teammates in Riverside, California — so do eSports teams. That's right: The U.S. government now recognizes eSports players as athletes, so maybe the rest of us can cut them a little slack. In case you're still not convinced, though, let's look at what makes these games proper sports.

Twitch.tv is a video-based social media platform and gaming community born in 2011 from a personal streaming website called Justin.tv. Twitch might be the biggest media service you've never heard of: It boasts 100 million users, 7.5 billion minutes of video watched and ratings that put major TV series finales to shame [sources: Carr, Weinberger]. In July 2014, Amazon bought the platform for $970 million [source: Weinberger]. Through Twitch channels, fans can watch everything from tournament games to pick-up-games, all while getting in some face time with the channel's owner. Popular players who gain a following can use Twitch and other sites to turn those views and followers into cash flow through subscriptions, ads, sponsorship and affiliate deals [source: Egger].