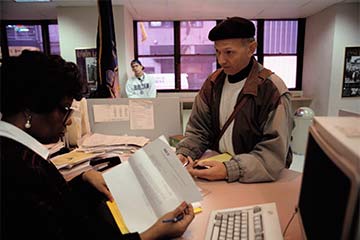 An office clerk peruses an application for unemployment in New York while the applicant waits. There are some tax breaks to offset the taxes on your unemployment checks.
© James Leynse/Corbis

If you lose your job, generally one thing that cushions the pain is the unemployment insurance benefit you would be entitled to from the government (in most cases). But just because you've been out of work for a while doesn't mean Uncle Sam is going to forget about you come tax time. The good news is that there are a few breaks available for unemployed filers.

First thing's first: That weekly unemployment check that you've (hopefully) been receiving is taxable. If you make more than $10,000 ($20,000 for joint filers) over the year in benefits and other income, you are required to file a tax return. You can choose to have estimated taxes withheld from the checks up front or you can pay it back at the end of the year. Married couples can also choose to have more money withheld from a working spouse's paycheck to cover taxes owed on unemployment benefits for the other spouse. The agency that handles unemployment insurance in your state will send you a Form 1099-G, detailing the amount paid to you and any sums that were withheld for taxes, sometime after January [source: Bell].

The amount that you owe will depend on your total taxable income. Unemployment benefits are treated like other sources of income -- salary, return on investments, etc. -- and is used to determine your tax bracket, which controls your tax rate [source: Bell].

Keep in mind that you may be owed a tax refund if you worked some of the year because the estimated taxes withheld during that time were based on the assumption that you would continue to make the same amount of money. Like unemployment benefits, earnings from severance pay or unused sick leave from your former employer are also taxable.

Being without a job may also qualify you for certain tax breaks, especially if you're married and have kids and you or your spouse work at least some of the year.

The earned income tax credit (EITC), for example, is designed to help individuals and families that work, but don't make a lot of money. It's been touted as helping low wage workers rise above the poverty line, but it also applies to people who get paid at a higher rate, if they get laid off or otherwise don't work for part of a year [source: Marr].

The amount of the credit and tax filers' eligibility for it depend on your income and how many children you have (up to three). In tax year 2014, an individual filer had to earn between $14,590 and $46,997 to be eligible for the EITC and a couple had to make between $20,020 and $52,427. Unemployment benefits don't count for EITC eligibility purposes [sources: Bell, IRS].

The maximum tax credit available for tax year 2014 was just more than $6,143. The EITC is refundable, meaning that you can get the cash if you don't owe the IRS money at the end of the year. It also looks like the size of the credit may jump in the coming years and that the EITC may be tweaked to provide more benefits to single workers who don't have children. One proposal would reduce the minimum age for seeking the EITC to 21 and beef up the max credit available by about $1,000 [source: Marr].

Meanwhile, unemployed parents can still take advantage of child-related tax breaks. That includes the Child Tax Credit, which pays up to $1,000, and the Child and Dependent Care Credit, which can lower your tax bill by up to $3,000 ($6,000 for joint filers) [sources: Tax Policy Center,Center on Budget and Policy Priorities].

Now, let's see how you can write off expenses related to your hunt for your next job.

What is Unemployment Insurance?

Unemployment benefits are generally available to workers who lose their jobs through no fault of their own. The insurance system is overseen by the U.S. Department of Labor and administered by state government agencies. The benefits are based on a percentage of the worker's average weekly earnings over the course of the previous year and paid by a tax imposed on employers [source: Department of Labor].

Don't forget to tally all of the expenses that go into your new job search. If you file itemized deductions, the costs related to resume preparation, travel expenses and help from job coaches and employment agencies are tax-free. That is, as long as you're looking for work that's generally in the same field as your previous employment. So if a laid-off engineer decides to try and find work as a chef, he or she can't deduct those job-related expenses.

Sure, you might really need to spend all of those lonely nights playing Call of Duty in your mom's basement to have any shot at becoming a professional gamer. That doesn't mean Uncle Sam is going to let you deduct the cost of a new PlayStation. Unless, perhaps, you were working in the video gaming industry prior to losing your job. If you haven't been working at all -- because you're fresh out of college, for example -- you're not going to be able to deduct the costs that go into looking for your first real gig.

Some folks might see losing a job as a blessing in disguise that frees them up to pursue a different career or start a business. Others might scramble to pick up some odd jobs here and there to make ends meet. The extra income could have impact on your unemployment benefit, since you are required to report it each week that you file for these benefits. States usually have a set amount you are allowed to make extra before they reduce the amount you receive. Some states are more generous than others, so check with your local department of labor before you do anything.

If you decide to try working for yourself permanently, it's important to understand the tax consequences. That includes being on the hook for the employer and employee share of Medicare and Social Security taxes. It may also require filing a schedule of profits and losses.

While you're building that new business -- or just looking for a new position -- you're probably going to need some cash. Savers can tap into retirement accounts early, but they're likely going to have to pay 10 percent in withdrawal penalties. The fee is waived if the money goes toward certain medical expenses.

Should I convert my 401(k) to a Roth IRA?
How Gift Tax Works
10 Tax Deduction Tips for Families