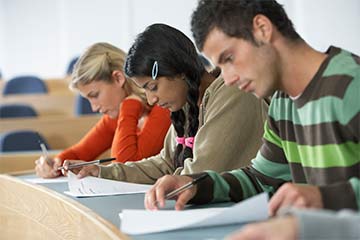 The IRS helps out college students with a number of tuition credits.
Fuse/Thinkstock

Going to college isn't just about afternoons perfecting your corn hole game, late night orange crush parties and early mornings waking up on the quad with only a vague idea about how you got there. It's also about stuff like, you know, learning a thing or two and maybe even preparing yourself for life as an adult. On that score, one of the first thing that students should wrap their brains around is that higher education ain't cheap.

Whether you're going to trade school at night, pursuing a master's degree in business or writing a Ph.D. thesis on the mating rituals of the Amazonian wasp, there is tuition to pay and books and other supplies to buy. There's also the small matter of keeping a roof over your head and food on your plate. While the tax breaks available for students and those who support them aren't going to come close to covering this financial burden, they can help ease the pain a bit.

There are two major sources of tax savings for tuition and other expenses: the Lifetime Learning Credit (LLC) and the American Opportunity Tax Credit (AOTC). Both the LLC and AOTC are tax credits, which means that they reduce the amount of money that a tax filer owes at the end of the year. That's different than a deduction, which lowers a person's taxable income. The credit is applied on a dollar-for-dollar basis. A person who takes a $1,500 AOTC or LLC, for example, will owe the government $1,500 less than they would without the credit [sources: IRS, IRS].

It's important to be familiar with each of these credits because you can't claim both in the same year. We'll explore the benefits and restrictions of each one on the next pages.

The Lifetime Learning Credit covers up to $2,000 of tuition and related expenses for undergraduate and graduate education. It also applies to other courses taken at an approved educational institution that are aimed at helping students enhance their job-related skills. There are no age requirements and the student need not actually obtain a degree in order to take advantage of this credit. If you receive an IRS Form 1098-T at the end of the year -- or, more likely, the end of January the following year -- your school is likely approved for LLC and AOTC purposes [source: IRS].

Like the AOTC, the LLC limits eligibility based on income. It's designed to help students and families hit the hardest by educational expenses. In 2014, the LLC can be claimed by single tax filers who make $52,000 or less in modified adjustable gross income over the year. The limit jumps to $104,000 for spouses and other joint tax filers. People who make between $52,000 and $62,000 ($124,000 for joint filers) can claim some of the credit, at a reduced amount [sources: IRS].

Unlike the AOTC, the LLC isn't refundable. If you don't owe the government anything at the end of the year, Uncle Sam won't send you a check for the money that you would otherwise be credited under the LLC. To avoid losing out on the credit, tax filers may consider reducing the amount that they get withheld from paychecks and other sources of income.

The American Opportunity Tax Credit, on the other hand, offers up to $2,500 in tax savings for students enrolled at a school that's eligible to participate in the federal student loan program. It's available for a total of four years and can be claimed by either the student or someone who lists the student as a dependent [source: IRS].

The credit is more limited than the LLC in terms of the types of education covered. A student must be pursuing a degree or other recognized credential in order to be eligible. He or she must also have enrolled at least part-time during one academic period in the tax year. The student also can't have completed four years of higher education at the time, nor already claimed the AOTC in each of the preceding four years. Students who have been convicted or plead guilty to a felony drug charge are not eligible for the credit [source: IRS].

There's one other big difference between the LLC and AOTC that students and other filers should be aware of. The AOTC is partially refundable. If you don't owe the government money at the end of the year, you can get up to $1,000 in cold hard cash back from Uncle Sam for claiming the AOTC [sources: IRS, IRS].