What are the tax rates for an S corporation? 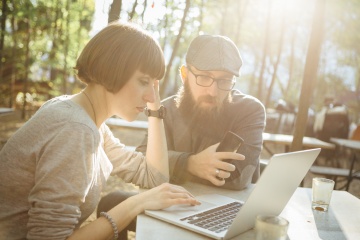 Deciding to become an S corporation might help these small business owners with their tax liability.
© fotografixx/Westend61/Corbis

Let's say you're self-employed. It means a lot of great perks: You don't have to gulp down the syrupy, pumpkin-spice-flavored coffee that Barb from Accounting insists on brewing every fall, spilling lunch on your pants doesn't lead to an embarrassing nickname around the office and you can watch March Madness without your finger hovering over the minimize button the entire time.

It also has its drawbacks, in the form of taxes. No employer is withholding money, for one, so you're responsible for saving for Uncle Sam on your lonesome. You have to pay your own self-employment taxes (to cover Medicare and Social Security) instead of having an employer chip in. And you can get in trouble, come tax season, if you haven't been careful about putting away (or sending in) the right amount of tax owed.

Enter the S-corporation designation. It allows for a company to pass through its profit or loss to the owners or investors in a company. That means that any income (or loss) is reported on the shareholders' individual tax returns and taxed at the individual tax rates. Going back to our example for the self-employed, it means you can call some of your money "salary" and some "distribution." You'll have to pay self-employment taxes on the salary part of your income, while the distribution qualifies for regular old income tax.

But that's just one way that an S corporation will get you a lower tax rate. If you own a larger company (and keep in mind that it can't have more than 100 shareholders, according to IRS S corporation rules), an S corporation designation allows you to get out of your income being taxed twice -- once as income, and once as dividends. So if your company makes $100,000 and has four shareholders with equal shares, each would pay taxes on $25,000 [source: Dealy]. Remember, that's at each of the shareholder's individual income rates.

But fair warning: The IRS gets that forming an S corp for your business might be lucrative. The shareholders must be paid at a reasonable level, so that they're not avoiding taxes [source: SBA]. And if you're self-employed, the IRS is going to be on to you if you claim that $15,000 of your income is "salary" and the remaining $80,000 is that sweet distribution money that doesn't require self-employment taxation. In general, the IRS is quite keen to make sure that S corps are declaring themselves appropriately, so make sure to practice due diligence if this issue faces your business come tax time.