Tax Day can get a little crazy even when you're sitting in front of your home laptop on TurboTax. But what if you have to get on the subway, take a cab to mail your return after hours? What if you have to just run as fast as you can toward your city's central post office to meet the midnight deadline? Here at the James A. Farley Post Office in New York (right across the street from Penn Station) you'll find the good, bad and just plain crazy that surrounds the Ides of April. Happy Tax Day! 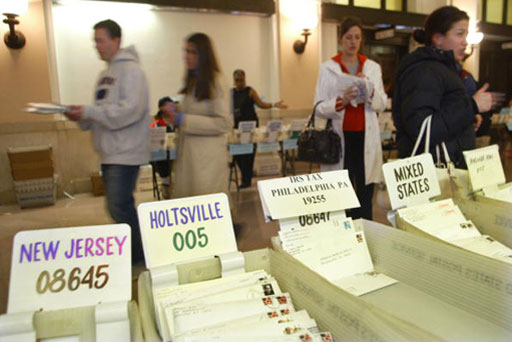 It's April 15th -- better known as tax day. Stamped envelopes are sorted and ready to be sent out to tax processing centers throughout the U.S. as last-minute filers head to the James A. Farley Post Office in New York City before the midnight deadline. 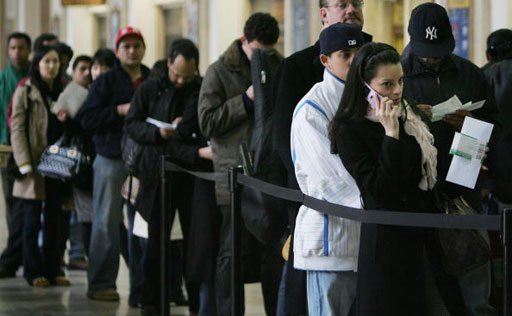 Ah … the lines, the waiting, the looks of despair -- it must be tax day. 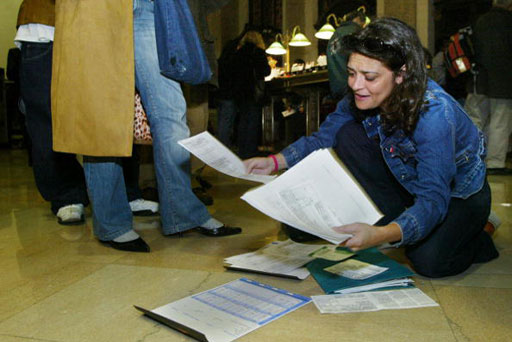 Last-minute filer Eva Pingarron carves out a little space on the floor for a final check on her tax return. 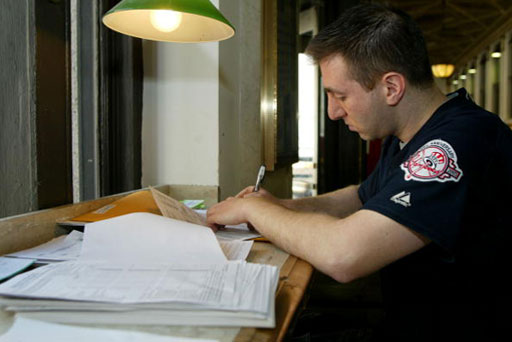 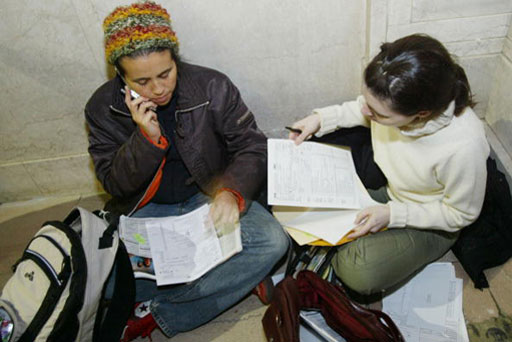 As midnight closes in, Manhattanites Silin Cowless (left) and Elizabeth Hamilton hunker down on the floor to finish their tax returns. 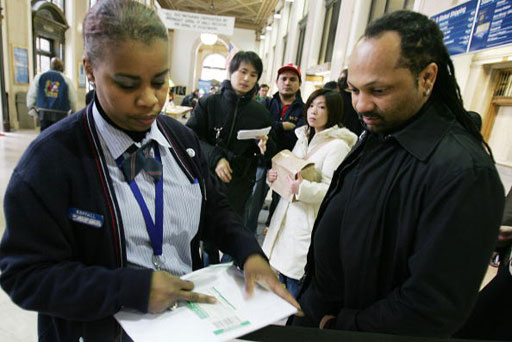 Tax day was extended to April 17 back in 2007 -- and again in 2012 -- but that didn't stop last-minute filers from waiting until … well, the last minute. Here, U.S. Postal Service employee Flo Kendall helps a customer before he mails his return. 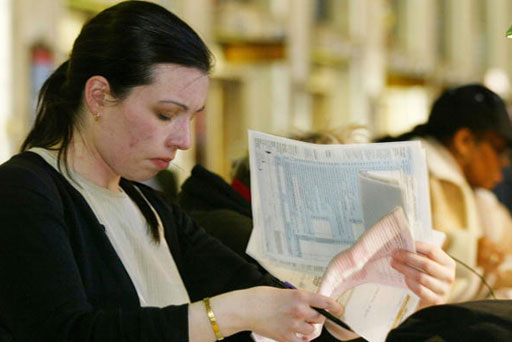 Mary Fiero gives her return the once-over on Tax Day 2004. Don't forget to double-check your figures! 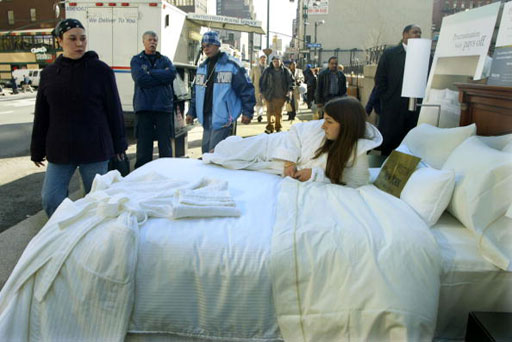 Heather Govern watches the traffic on Eighth Avenue go by as she relaxes on a bed in front of the post office on tax day 2004. The Westin Hotel in Times Square gave that bed to the very last person to file his or her return before the midnight deadline. 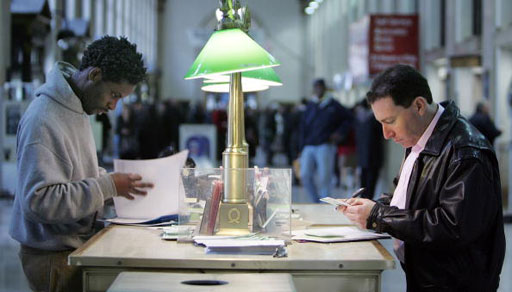 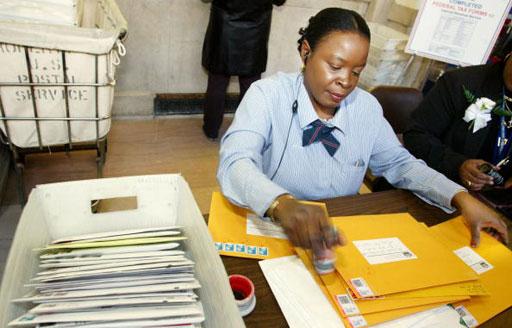 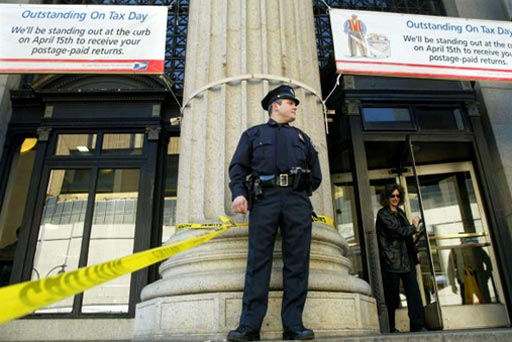 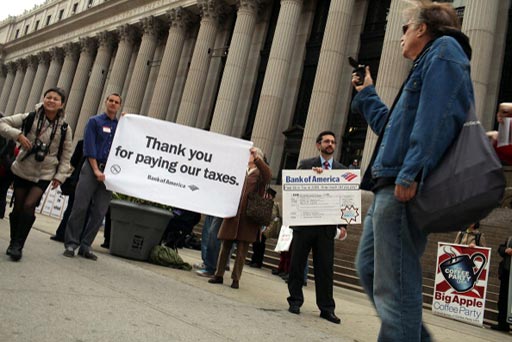 Tax day 2011 (on April 18 due to a holiday) was marked by protests and in-depth discussions of corporate taxation and income inequality. Here, protesters dressed as Bank of America employees "thank" taxpayers for paying their taxes for them. 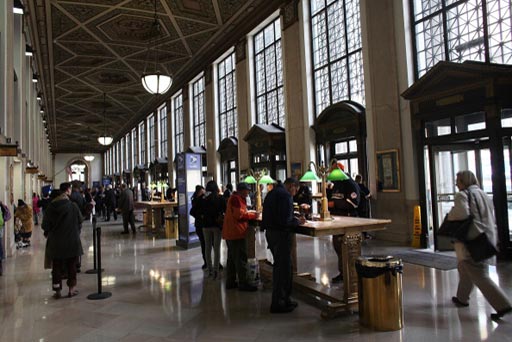 The calm before the storm -- daytime at the James A. Farley Post Office on Tax Day 2011. 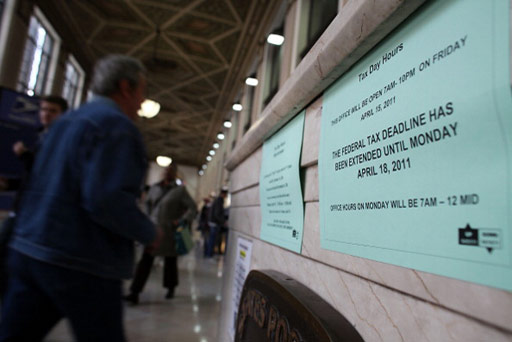 Did taxpayers need any further reminder that the tax deadline had been extended in 2011? That's a bit of a trick question, since the Post Office still expected an estimated 10,000 last-minute filers on tax day. 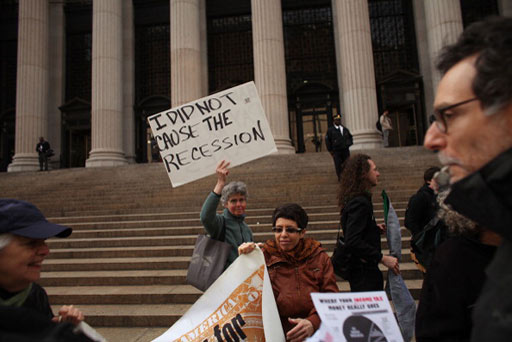 Protests and serious questions about corporate fraud and taxation loopholes dominated Tax Day 2011. So, who do you think caused the recession?

What are some HSA tax benefits?
How Year-end Business Taxes Work
5 Differences Between Roth and Traditional 401(k)s