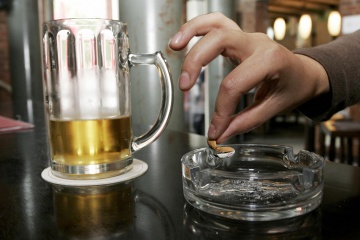 Some sin-tax skeptics take issue with the disproportionate burden they place on the poor.
SASCHA SCHUERMANN/AFP/Getty Images

We've established that sin taxes can and do work under the right circumstances, but should they be a tool in the government's taxation toolbox? One argument against the use of sin taxes is that they're a regressive tax, one that affects the poor more than the rich.

On the one hand, this argument seems to be a no-brainer, since a sin tax is a form of sales tax, and sales taxes almost always hit poor people harder than wealthy people. That is, unless the tax is specifically aimed at the stuff rich people like to buy, like yachts or luxury cars. Such taxes exist, but they're usually called luxury taxes. Whereas sin taxes cover the things the IRS deems dangerous, luxury taxes are levied on high-price items deemed nonessential.

Are sin taxes regressive? Maybe. Take, for example, taxes on cigarettes. As of 2016, a New Yorker has to pay a total of $5.85 in state and municipal taxes on each pack of cigarettes. Then add $1.01 in federal excise tax, bringing it $6.86. If said New Yorker smokes a pack a day, that amounts to more than $2,500 a year in cigarette taxes alone [source: New York State]. Proportionally, that's much more of a hit for a low-income person than for somebody with plenty of dough.

Of course, the purpose of the tax is to force people to cut back on their habit, or quit altogether. Everybody knows that smoking is one of the worst things you can do for your health, so if you don't like paying heaps of tax, smoke less. It's that simple. At least that's the argument of sin tax proponents. And in this case, they have a point. As we saw earlier, raising taxes on cigarettes does seem to reduce the amount people smoke, and this is particularly true for poor people. This is good news in that the poor typically smoke more than the rich [source: Remler].

Taken together, these factors are the grounds for some arguments that taxes on cigarettes are actually progressive rather than regressive. The idea is that they have progressive effects on the health of poor people because of, not despite, the fact that they cause more financial hardship for those with low incomes.

But even if you find this argument compelling, there are still reasons for skeptics to reject the idea of sin taxes.