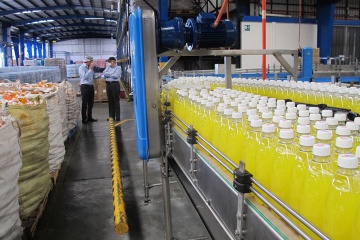 Pineapple sodas are produced in the Oaxaca factory of Gugar Soda.
The Washington Post/Getty Images

When lawmakers impose sin taxes these days, the official goals are to improve health outcomes, reduce the negative impacts of the taxed substance and raise a little revenue while they're at it. There seems to be some evidence that the second and third goals can be achieved, but as to the first, the jury is still out.

Although Berkeley was the first jurisdiction in the U.S. to implement a soda tax, it's not the first place in the world to do it. It's not even the first in North America. As of 2014, the entire country of Mexico has a peso-per-liter tax on soft drinks and a tax of 8 percent on junk food. Consumption of both categories of food and drink have fallen dramatically [source: Newkirk]. But we don't yet know whether the national rate of obesity has changed, or whether people are any healthier as a result of the tax. The problem here is that eating sugar and junk food isn't the only way to become obese and/or unhealthy. In other words, success could depend on which sin you tax.

Take cigarettes. Not only does taxing them cut consumption, but if the tax is high enough, health outcomes even improve a bit. A sin tax on cigarettes can lower incidences of lung cancer, heart attacks and strokes. Not by a lot, but enough to make it worthwhile. Presumably, some of the negative effects of secondhand smoke would also be diminished at the same time.

Taxing alcohol would seem to be even more effective. Back in 2009 the state of Illinois made each bottle of beer more expensive by 1 cent and each serving of hard liquor by 5 cents. Amazingly, a study found that for each month after the implementation of the new taxes, deaths associated with drunk-driving dropped by 25 percent in the general population and 37 percent for young people [source: Newkirk]. Researchers expected to find that hardcore drinkers wouldn't be affected by the tax, figuring their compulsion to imbibe would be impervious to small price increases. But to everybody's surprise, drunk-driving deaths went down even for this category of drinker [source: Newkirk].

Sounds like great news, but skeptics, like mathematics professor Rebecca Goldin, have taken a second look at the data and raised serious concerns about the conclusions stated above. In her view, correlation does not equal causation. She argues the decline in traffic deaths is not specific to alcohol-related crashes, but is part of a general trend unrelated to drinking [source: Goldin].

So maybe some sin taxes can work if they tax the right sin, but maybe they don't. Taxing cigarettes and alcohol is popular in part because smoking and drinking are perceived to be not only unhealthy for the individual consuming them, but also for the public at large (e.g., secondhand smoke, drunk-driving accidents, domestic abuse, etc.).

It isn't quite as clear how people who choose to drink soda and eat unhealthy food are harming anyone other than themselves. It's been argued that society bears the cost of the medical consequences of an unhealthy diet, but that could be said of many lifestyle choices, including sloth. It's well known that lack of exercise is bad for our health. Should we be taxed for laziness?

As of 2014, the U.S. states that collect the most sin taxes were Rhode Island, Nevada, West Virginia, New Hampshire and Delaware. Nationally, in that same year, sin taxes brought in a total of $32 billion [source: Governing]. Here's the breakdown: Tobacco: nearly $17 billion // Alcohol: more than $6 billion // Casinos: $5.5 billion // Racinos: just over $3 billion // Video gaming/Pari-mutuel betting: a little more than $700 million