Sins of the Past 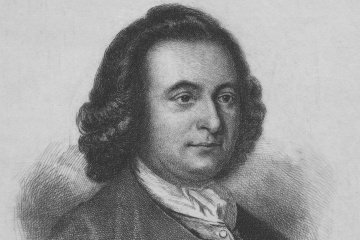 George Mason was a delegate to the Constitutional Convention and one of only three men who refused to sign the Constitution because it didn't contain a Bill of Rights at the time.
Smith Collection/Gado/Getty Images

As indicated earlier, sin taxes are taxes on stuff we like but that society thinks we probably shouldn't have, at least not in large quantities. And they've been around for a long time, too. In fact, between 1863 and 1913, 90 percent of the U.S. government's revenue came from taxes on sinful substances like smokes, wine, beer and liquor [source: IRS]. In case you're wondering what happened in 1913, that was the year income tax became a thing. A sin tax is not an official category; it's a popular name for an excise tax levied on products thought to be costly to society.

It's interesting that the American government's reliance on sin taxes started in 1863 because almost exactly a century earlier in 1764 the British Empire's imposition of a sugar tax on the American colonies was one of the sparks that lit the revolutionary flame.

The main purpose of the sugar tax was to generate revenue for the king's coffers, but it was also an attempt to kill two birds with one stone. The American colonists weren't just using sugar to sweeten their porridge; they were using it to make rum. Lots of rum. In fact, the colonies had a reputation for excessive rum intake, and upon this practice the crown frowned [source: Newkirk]. Needless to say, the new tax was unpopular and when, a decade or so later, the Brits threw a stamp tax on top of it, things got ugly.

Even Bloomberg's experience with banning versus taxing played out long ago at the very founding of the United States. As the Founding Fathers met in Philly to hash out the Constitution, a gentleman from Virginia named George Mason argued that Congress should be able to enact something called "sumptuary laws."

Sumptuary laws have been the tools of European and Asian lawmakers since ancient times. Usually, they took the form of preventing commoners from buying bling and throwing ridiculous parties. On the one hand, such laws helped prevent the masses from squandering their hard-earned money on useless trinkets. On the other, sumptuary laws effectively served to maintain class distinctions (and make sure you had money available for tithing). The idea was that it was important to be able to tell a rich and powerful person from an impoverished peon. If poor people could dress in fancy garb, everybody would be confused, and who knew what shenanigans would ensue? (Remember "The Prince and the Pauper"?) Queen Elizabeth I, for instance, was a big fan of sumptuary laws as she found it intolerably baffling when common people got gussied up like aristocrats [source: Crossen].

To be fair, back at the Constitutional Convention, George Mason didn't say he wanted sumptuary laws for the maintenance of class distinctions, but rather to improve the general conduct of Americans. In other words, he didn't want the citizens of the new republic to be too flashy. But his fellow delegates didn't agree. Taxes, they said, were better than laws [source: Crossen].

That could be true, but it's setting the bar low. Do sin taxes really work?