How the Self-employment Tax Works

Browse the article How the Self-employment Tax Works 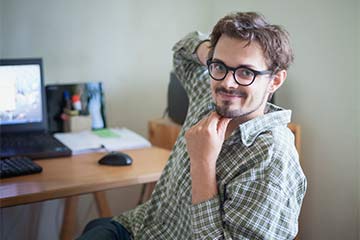 Freelance writers have the freedom to work as independent contractors but they have to pay a self-employment tax.
© Mika/Corbis

Being your own boss, setting your own hours, enjoying the full fruits of your labor without interference from meddling middle managers and corporate overlords — that's the self-employed dream!

But there are trade-offs for all of that freedom and autonomy. You don't have a dedicated human resources staff to manage your 401(k) contributions, withhold federal and state income taxes, or help pay for unemployment benefits. When you're self-employed, you have to juggle all of those responsibilities yourself — or make enough money to hire an accountant to do it for you.

The self-employment tax is a great example of one of the trade-offs that comes with working for yourself. If you get a regular paycheck from an employer, you probably noticed those deductions labeled "FICA – Social Security" and "FICA – Medicare." FICA stands for the Federal Insurance Contributions Act, which requires every American worker to pay into the Social Security and Medicare trust funds in order to claim benefits upon retirement.

For 2014, the total cost of FICA contributions is 15.3 percent of earned income. If you work for someone else, your employer pays half of your FICA contributions (7.65 percent), and you're on the hook for the other half. If you are self-employed, however, you need to pay the entire 15.3 percent yourself [source: IRS]. That, my friend, is called the self-employment tax.

In truth, the self-employment tax isn't some kind of punishment for independent workers and small business owners. Its sole function is to make sure that self-employed people are covered by the same "safety net" insurance as salaried workers. By making FICA contributions on your earnings, you earn credits in the Social Security system, allowing you to claim a monthly benefit throughout retirement [source: SSA]. The same is true for Medicare benefits. By paying self-employment tax, you are covered in your golden years.

So how exactly do self-employed folks calculate their self-employment tax, and is it true that you have to pay estimated taxes four times a year? Let's start by defining who fits the description of "self-employed" according to the only source that matters: the IRS.

There are around 18 million self-employed workers in the United States, but who are they exactly [source: Fox]? The broadest definition of the self-employed is people who are in business for themselves. That's not quite specific enough for the IRS, so it has come up with categories of workers who qualify as self-employed [source: IRS]:

Unsure whether you're an independent contractor or an employee? Here's a tip: look at the last paycheck you received. Was it written out for the full amount, or did the payer withhold federal and state income tax and FICA contributions? If money is already being withheld from your paycheck, you are an employee and can stop worrying about self-employment tax.

Keep in mind that you don't have to be a full-time self-employed worker to qualify as self-employed. Many self-employed people operate home-based businesses in their spare time, or hire themselves out for part-time work in addition to holding down a "day job." The IRS doesn't care whether you are full-time, part-time or one-time. If you made more than $400 in self-employment income, the IRS wants a piece of it.

One last note, the self-employment tax rules apply to workers of all ages, even folks who are already collecting Social Security and Medicare benefits [source: IRS]. So if you've retired from your office job and start painting houses for some spending money, the IRS still wants its full cut.

OK, next we'll walk you through the process of calculating the self-employment tax itself.

Thanks to a strange tax loophole, members of the clergy are considered self-employed for purposes of Social Security and Medicare taxes. Therefore, they pay those taxes themselves. However, other church employees will have their FICA contributions withheld and paid [source: UNYUMC]. Ministers or members of recognized churches who are conscientiously opposed to insurance can apply for an exemption from paying self-employment tax for their pastors as well as their other employees. The employees would then have to pay the tax on their own at the self- employment rate.

How to Calculate Self-employment Tax

The instructions for calculating the self-employment tax are found on IRS form Schedule SE: Self-Employment Tax:

Here's some good news. The IRS gives self-employed workers a tax break to make up for the fact that employed people only pay half of their FICA contributions (their employers cover the other half). The IRS let's self-employed individuals deduct half of the cost of the self-employment tax from their taxable income. The calculation is simple:

Now that you've calculated how much you owe in self-employment tax, there's only one (sad) thing left to do: pay it. Keep reading to learn about estimated taxes.

How to Pay Self-employment Tax

Here's a little-understood fact about the United States tax system. While most of us think of April 15 as Tax Day, the government is actually collecting income tax and other taxes year-round. That's how it keeps government programs funded and makes interest payments on the national debt.

If you work for someone else, your employer withholds income taxes and employment taxes — another name for Social Security and Medicare contributions — from each paycheck and deposits the funds in Federal Reserve banks. If you're self-employed, you also have to pay taxes year-round in the form of estimated taxes.

For the purposes of this article, we're going to focus on the self-employment tax portion of estimated taxes. When you file your federal tax return in April, you will be instructed to calculate your estimated self-employment tax for the next tax year. Basically it's an educated guess based on what you earned this year and whether you expect your earnings to grow or shrink in the upcoming year.

Follow the instructions on IRS form 1040-ES: Estimated Tax for Individuals to calculate your estimated tax payments for the coming year. The process is almost identical to the one used for calculating this year's self-employment tax, except the amount due is divided into four equal payments. Estimated taxes are due quarterly.

The estimated tax due dates for 2015 are:

Estimated taxes must be paid by April 15 for January through March, by June 15 for the second quarter of the year, by September 15 for the third quarter and by January 15 for the fourth quarter, in order to avoid penalties The fourth quarter deadline is extended to February 2 for people who file a year-end tax return and pay the entire balance due at the same time [sources: Bell, Yale].

If your total estimated self-employment tax for the upcoming year is less than $1,000, you don't have to pay estimated taxes. But if you owe more than that amount and you fail to make estimated payments, you will be penalized a small percentage (3 percent in 2014) of the amount unpaid each quarter [source: Fitzpatrick].

You can pay estimated online using a credit card or direct bank account transfer through IRS E-Pay. If you prepare your income taxes using tax preparation software, the program will automatically generate four estimated tax vouchers that you can mail in with your estimated tax payment each quarter. There are different mailing addresses for each state, so check out the instructions for Form 1040 SE for the location nearest you.

For lots more information about taxes and self-employment tips, check out the related HowStuffWorks articles on the next page.

As a freelance writer, I am all too familiar with the self-employment tax. I wasn't always so savvy, though. I clearly remember the first year I broke out on my own, so excited to be getting paid directly for my work, but completely unaware that no one was withholding income or FICA taxes from my paychecks. Boy did I get an unwelcome surprise when April rolled around! We owed a big chunk of change in federal and state taxes, plus the dreaded self-employment tax. We've been paying estimated taxes ever since, so now we feel the pain year-round, just like everybody else.