What is the kiddie tax? 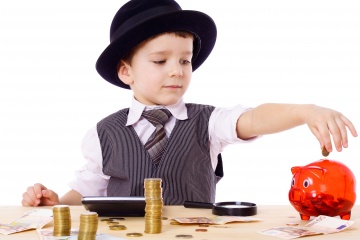 Thanks to the kiddie tax, children can't serve as tax loopholes.
©iStock/Thinkstock

Little Shelby is so cute, isn't she? She has dark curls that cascaded around her round face. She has the cutest little dimple and coos like a dove when you hold her. She also has an impressive investment portfolio, complete with blue chips and tech stocks. Last year she made $1,500 in unearned income, which, according to the IRS, is income on investments, including interest, dividends and capital gains.

Luckily, Shelby doesn't have to pay taxes on that money. However, if she made an additional $500, Shelby would have to pay taxes like the rest of us. That's because of the so-called kiddie tax. Does it strike you as cruel or unfair that children should have to pay taxes? Well, it happens for a reason. Congress created the kiddie tax in 1986 to stop parents from sheltering income by putting investment accounts in their children's names. Before the kiddie tax was implemented, children (read: parents) could sell their stock and pay lower capital gains rates. When Congress realized the government was losing tax revenue, it instituted the kiddie tax, which kicks in when a child's investment income is more than $2,000 [sources: Bell, Onink].

Parents can report the child's investment on their income tax returns, or they can have their child file a separate return. Either way, the tax is calculated the same way. The first $1,000 is free, offset by the $1,000 standard deduction, while the second $1,000 is taxed at the much lower child's rate. Anything in excess of $2,000 is taxed at the parent's rate. The kiddie tax age limit was bumped from the 2006 limit of 14 years old and younger up to 19 years old and younger (24 years old for full-time college students if they don't have any earned income from a job) in 2013 [sources: Bell, Onink].