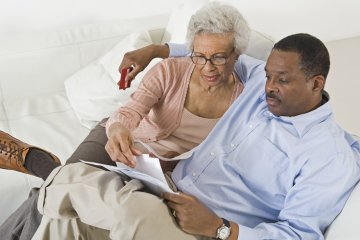 They're not as generous as the tax perks for contributing to a 401(k), but you may be eligible for tax benefits if you contribute to an IRA.
moodboard/moodboard/ThinkStock

They say a penny saved is a penny earned, but for a whole bunch of folks, saving still seems to be on the to-do list for later. According to the results of an online survey released by the Federal Reserve, 31 percent of the more than 4,100 Americans who responded said they currently had no money set aside for retirement purposes. That includes nearly 20 percent of respondents between the ages of 55 and 64. In other words, a significant portion of people nearing the traditional retirement age are going to have to keep working, whether they want to or not [source: Marte].

That's one reason why the U.S. government tries to incentivize retirement savings. That's right: Uncle Sam will — more or less — pay you to put some of your paycheck away for later in life, in the hope that you eventually have enough saved to ride out of your cubicle and off into the sunset when the time is right, bound for the nearest cruise ship or shuffleboard deck.

For many workers, a 401(k) is the primary method of saving cash for retirement. In the U.S., the Internal Revenue Service currently allows taxpayers to contribute — in addition to any contributions by your employer — up to $17,500 to a 401(k) plan (going up to $18,000 in 2015) without that money being immediately taxed [source: IRS].

For those workers who aren't fortunate enough to have an employer-sponsored retirement plan, or those who want to put away a little extra money in addition to their 401(k) contributions, an individual retirement account (IRA) is another way to go. While the feds aren't as generous with the incentives for an IRA as they are for a 401(k), the tax code does provide significant potential savings for those who qualify.

But before we get to that, let's take a look at exactly what an IRA is, and how it's different from other investment accounts.

It would probably be difficult to take full advantage of IRA tax deductions without first understanding what an IRA is. This investment tool allows people to squirrel away some of the money they earn for retirement. It also lets savers put that money to work in a wide variety of investments, from stocks and bonds to mutual funds. The account is managed by a financial institution, which allocates the money as directed by the investor. Because an IRA is a designated retirement account, investors are penalized if they take money out of the account before reaching a certain retirement age (currently: 59.5 years old) [sources: Fidelity, CNN, CNN].

There are three types of IRAs. A traditional account is one in which some or all of the money placed in the account isn't taxed until it's withdrawn, depending on the person's income and eligibility for tax deductions. This option is attractive to investors who want to reduce their current tax obligation and put off paying an excise on the funds until their non-working years, when their income — and tax bracket — is likely to be lower. Traditional account holders must start withdrawing from the IRA once they reach 70.5 years of age [sources: Fidelity, CNN].

A Roth IRA, on the other hand, is one in which the money allotted to the account is taxed right away. This money is treated as income for tax purposes and is used in determining an individual or couple's tax bracket. Some investors prefer this type of account because it allows the money to grow tax-free and gives them the luxury of taking that cash out when they need it (provided that they've reached the retirement age) without paying taxes on the funds. Unlike traditional IRA investors, people who put their money in a Roth IRA aren't required to start taking out some of the cash out at a certain age [sources: Fidelity, CNN].

A rollover IRA is a third type of retirement account that's used to invest money "rolled over" from an employer-sponsored account like a 401(k) or 403(b), an annuity offered to some public employees. These accounts are subject to the same rules and requirements as a traditional IRA [source: Fidelity]

IRA Tax Deduction Eligibility for Those Without Employer Plans

The money that you put away into a traditional or rollover IRA may be eligible for a deduction come tax time. Unlike a tax credit, which reduces a person's tax liability on a dollar-for-dollar basis, a deduction reduces the person's income for tax purposes. That means the money won't be counted as income in determining your tax bracket and calculating your tax obligation [source: IRS]. A person's eligibility for an IRA tax deduction depends on his or her income, tax filing status and whether the taxpayer's employer sponsors a retirement savings plan.

First, there are limits on the amount of money that an investor can contribute to a traditional IRA for tax purposes. In 2014 and 2015, the maximum contribution is $5,500 a year – per person – and $6,500 for folks who are ages 50 and over. Any money allotted to an IRA that exceeds these limits is taxed at a rate of 6 percent. The limits don't apply to rollover contributions [source: IRS].

Next, there's the question of whether your employer offers a retirement plan. A single person filing as a head of household or qualifying widow or widower who doesn't have the option to participate in a 401(k) or 403(b) through his or her job can claim a deduction for the full amount contributed to an IRA each year, subject to the limits described above. The same goes for a married person who files a joint or separate tax return and whose spouse also isn't offered the chance to participate in a retirement plan through his or her employer [source: IRS].

Things get a little more complicated for married folks when one spouse is covered under an employer-sponsored retirement plan. Their eligibility depends on their income: A married couple filing jointly when one person is covered by another plan can get the full amount of the IRA deduction if their adjusted gross income is $181,000 or less. Those who make between $181,000 and $191,000 can get a partial deduction, while those who earn more than $191,000 over the year aren't entitled to any deduction. If the spouse who isn't covered by the plan files a tax return separately, the income limit drops to $10,000 and only a partial deduction is available [source: IRS].

IRA Tax Deduction Eligibility for Those With Employer Plans

There's a whole separate set of eligibility rules for IRA contributors who also contribute to or are covered by a retirement plan at work. These rules similarly focus on the taxpayer's adjusted gross income and filing status.

A person who files a tax return as a single individual or head of household can deduct the full amount of their traditional IRA contributions — up to the maximum limit — if he or she earns no more than $60,000 in adjusted gross income over the year. The same individual can get a partial deduction if he or she makes between $60,001 and $69,999. Individuals covered by an employer-sponsored retirement plan and who make $70,000 or more in a given tax year aren't eligible for a deduction [source: IRS].

For a married couple filing jointly, the income limit for the full deduction jumps to $96,000 (combined) if both spouses are covered by a retirement plan through their jobs. Those who earn from $96,001 to $115,999 over the year can take a partial deduction, while those who make $116,000 or more aren't eligible for a deduction [source: IRS].

As with the deduction for taxpayers not covered by an employer-sponsored retirement plan, it pays for married couples to file a joint return. The income restrictions for married folks filing separately is a mere $10,000, and those who fall below this level can only obtain a partial deduction [source: IRS].

Form 1099-R is the tax document used to track deductions from pensions, annuities, profit sharing pans and retirement savings plans. That includes any money that you take out of a traditional, Roth or rollover IRA, even if it has already been taxed. The entity that makes the distribution — the financial institution that manages the account — must issue a 1099-R to you for every year in which you take money out of the IRA [source: IRS].