Browse the article How to Report Cancelled Debts on Tax Returns 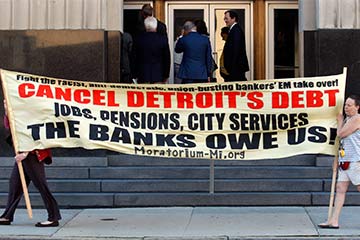 Protesters carry a banner calling for Detroit's debt to be cancelled as people enter the federal courthouse for day one of Detroit's municipal bankruptcy hearings in 2013.
© REBECCA COOK/Reuters/Corbis

When the economy is in a downturn, many people find themselves in debt of some kind. Mortgage debt, credit card debt, student loan debt -- it all adds up, and sometimes you just can't pay it all, no matter how hard you try.

If you default on a debt, after a certain number of years the creditor declares the debt uncollectible and reports it to the IRS as lost income. The same happens if your debt is forgiven, you abandon the property, settle a debt for less than it's worth, sell your home in a short sale, or if your property is repossessed or foreclosed upon.

Unfortunately, the IRS still wants to collect tax on this lost income, and guess who they'll come looking for? You. Here's why: Because you don't have to pay this debt anymore, the IRS looks at it as gained income, and they want their piece of the pie. Think of it as "phantom income." It might seem unfair, but it's the law, and ignoring it can have dire consequences. Thankfully there are plenty of exceptions.

Keep reading to learn more about cancelled debt and how to properly report it on your tax return.

Cancellation of debt (COD) is a trap into which many people unknowingly fall. If you owe money, and that debt is forgiven or discharged, you're left with COD income. For example, if you owed your credit card company $10,000 and they dismiss the debt, the IRS sees that $10,000 as gained income and requires you to pay taxes on it. The reasoning behind this phantom income is even though you don't actually have that income on hand now, at one point you did in some form or another, so you have to pay taxes on it.

Creditors who forgive more than $600 worth of debt are required by law to send out a 1099-C tax form, "Cancellation of Debt Income." You may not even know you owe taxes on COD income until you receive the 1099-C tax form in the mail. At least 6.3 million taxpayers were expected to receive 1099-C forms for the tax year 2012 [source: Martin]. If you receive one of these forms, Box 6 of the form typically has a code explaining the triggering event that generated the form. The code explanation is listed in IRS Publication 4681.

Even if you don't receive the 1099-C, but you did have cancelled debt, the IRS still expects you to report it on your income tax. If you're unsure if a 1099-C was filed for a cancelled debt, you can call the IRS at 800-829-1040 and request a transcript for the tax year [source: Detweiler].

If have COD income and are concerned that you now owe money to the IRS, all is not lost. Read on to learn about the many exemptions to this rule and find out whether you qualify for one of them.

Finding out you owe money to the IRS when you have already struggled financially and ultimately cancelled your debt can seem like adding insult to injury. However, don't panic just yet. Even if you have cancelled debt, you may not be obligated to pay it if you meet certain qualifications, or if your debt falls under certain scenarios.

Here's how you can qualify for exemptions on your cancelled debt [source: Wood]:

For most exceptions to paying taxes on cancelled debts, report them on IRS Form 982. Of course, these exceptions can be difficult to calculate and report, so consider consulting a tax professional.

Keep reading to find out how to report cancelled debt on your tax return.

Report your cancelled debt the year it's cancelled or when you receive a 1099-C in the mail. If you don't qualify for any exceptions on cancellation of debt (COD) income, you must report it on your tax return. (However, if you do qualify for an exception, be sure to use IRS Form 982 to report the exception.)

List your COD income on the "other income" line of your return or on Schedule C if your income relates to a sole proprietorship business. Many tax professionals advise just going ahead and reporting COD income, whether you receive a 1099-C or not. That way, if you receive a 1099-C in the future, you can advise the IRS you already reported the income.

You may have some questions once you receive your 1099-C, so here's a mini-FAQ to get you started.

What if you receive a 1099-C for a debt that your ex was supposed to pay? In a case like this, creditors issue 1099-Cs to both people for joint cancelled debts. You should check state law and with a tax professional to find out how much you need to actually pay. If you receive a 1099-C for a cancelled debt that is decades old, what do you do? As creditors are supposed to send out the form after trying to collect on a debt for three years, you will have to provide an explanation to the IRS as to why you believe the 1099-C should not have been filed.

What if you disagree with the amount listed on the 1099-C? If you receive a 1099-C that you feel is in error, contact the lender immediately to make corrections.

If you receive a 1099-C, does that mean you no longer owe the debt? That depends. If you received the form because you worked out a settlement with your creditor, then you no longer owe the debt. But if your creditor filed because they haven't been able to collect for three years and simply haven't recently attempted to collect, you may still be liable for the debt. Check your state's statute of limitations.

For more about tax returns and deductions, check out the links on the next page.