How is partnership income taxed? 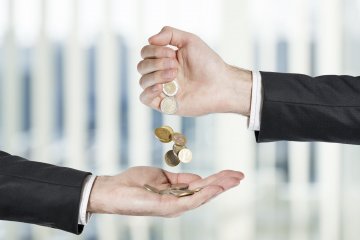 Having a business partnership brings up a number of tax questions.
milosducati/iStockphoto/ThinkStock

Powerful partnerships are the stuff the American economy is made of. Where would we be if Bill Gates and Paul Allen didn't meet up? Apple would probably have rotted without both Steves (Jobs and Wozniak). And clearly none of us would have any interest in eating Jerry's ice cream. (Bad example; I'll take the ice cream.)

But for every super famous and successful partnership, there are thousands of small business partners working to start up or maintain a functional enterprise. And it's not just responsibilities you're splitting – your spoils (or lack thereof) must be properly recorded and attributed to the Internal Revenue Service. Surprise, surprise – that isn't as simple as just splitting the check down the middle, like so many Chili's tabs.

For an organization that loves a complicated term, the IRS has a pretty easy, matter of fact way of describing how financials are reported for partnerships. It's called a "pass-through," which means that any profits or losses are passed through to the partners, and they have to record their share of income on their individual tax returns [source: IRS].

Of course, not all partnerships are totally equal, and they might include more than just two people. For that reason, you can split the income or loss any way you like. This is where it helps to have a written agreement detailing who gets what, but even if you don't you'll be required to pay on your own "distributive share," which is basically a default share, set by state law [source: Laurence]. Even if you're not withdrawing your "distribution" of the income (say you're leaving some of your money in the business for future costs), you still have to pay the taxes on your full share.

But don't think because you're paying individual taxes on your business you don't have to declare your partnership to the IRS. A Form 1065 provides some basic information to the IRS so it can make sure you and your partners are not bilking them, and you'll also have to complete a Schedule K-1 for the IRS and all the partners in the business. That details how the profits and losses are shared, which – if you're doing everything right – will then match up to each individual's own tax return.

Some important notes: much like a sole proprietorship, partners need to set aside estimated quarterly taxes since no employer is withholding them from income. Partners are also required to pay self-employment taxes. So partner up – and pay – up.