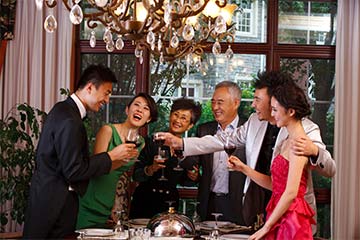 You might want to persuade grandpa to part with some of his riches now rather after he is gone, but don’t forget about the gift tax.
ViewStock/Getty Images

Whoever said it's better to give than to receive must have never read the U.S. tax code. With big gifts come great tax responsibility. The so-called gift tax is the federal government's way of taxing a piece of certain property that changes hands without the giver receiving something of similar value in return from the receiver. A surcharge of up to 40 percent is generally imposed on the person who transfers the property -- including money -- regardless of whether the gesture is actually meant as a gift [sources: Cordes, Nolo].

It works like this: a person who dies with a substantial amount of property and money -- an estate -- is subject to an estate tax. That means some of that wealth will go to Uncle Sam, rather than the former estate holder's family, friends or mistress. In order to avoid the penalty, some folks look to spread their wealth around while they're still alive. These property transfers are subject to the gift tax.

The amount of the gift tax is based on the property's fair market value. For cash, that value is pretty easy to understand. Other items, however, are valued by what an ordinary buyer would pay for them. "The fair market value is the price at which the property would change hands between a willing buyer and a willing seller, neither being under any compulsion to buy or to sell and both having reasonable knowledge of relevant facts," according to the tax code.

One of the main purposes of both the gift and estate tax is to spread the wealth. In other words, policymakers decided that high concentration of wealth among the landed gentry -- whom various "Occupy" movements might refer to as "the 1 percent" -- was bad for the rest of Americans. So the tax code takes a hunk of any family's wealth, subject to threshold requirements, every time that it's transferred down the line [source: Cordes].

It's hard to fully grasp the idea behind the gift tax without also understanding the estate tax. Originally enacted in 1916, the estate tax was designed to prevent high wealth from simply transferring from one member of a family to another over generations. When a person dies, the government can take up to 40 percent of their transferable wealth -- land, money and other assets -- before it is distributed to heirs. The tax is limited to high value estates: As of 2014, it kicks in only when the person who died had at least $5.34 million in gross assets and prior gifts [sources: IRS, Cordes].

Wait, what was that about gifts? Yes, the gift tax was created eight years after Uncle Sam started charging the estate tax to combat against the practice by land barons and the like of simply giving away all of their stuff before they die in order to avoid being taxed. So while many gifts aren't taxed, up to a certain amount, they do count toward a person's estate when he or she dies. If the person has $1 million in taxable assets and has given away more than $4.35 million over his or her lifetime, for example, he or she will be subject to the estate tax in 2014 [sources: IRS, Cordes].

Of course, that doesn't necessarily mean that there aren't still a few ways to reduce the tax burdens associated with giving gifts or, well, dying.

Why Do We Pay Taxes?

Mostly because it's the law. In the United States and elsewhere, people who don't file a tax return and pay up their "fair share" (or who try to conceal their income and financial activity) face hefty civil penalties and even jail time. The primary reason behind levying taxes, however, is to fund federal, state and local governments and to pay for necessary items like roads, bridges and schools, as well as services like Social Security and Medicare.

Like any "fair" tax, the gift surcharge comes with its own set of loopholes. Taking advantage of them often requires knowing when to give, who to give to and how much to give at a time.

Gifters can transfer up to $14,000 per year ($28,000 for spouses) in 2014 and 2015 without being subject to the tax. Gifts to a spouse, charity or political organization are exempt from the tax completely, as is the payment of education and medical expenses. The maximum levels have changed over time, so it is important to check with the Internal Revenue Service or a tax professional before making a large gift each year. Although you can make as many gifts of $14,000 or less each year as you wish, it's important to remember that they will count toward your taxable assets for estate excise purposes [source: IRS].

Meanwhile, the estate tax comes with its own unique set of rules. That includes a number of deductions that can be used to lower the value of a person's estate at death. The marital deduction, for instance, provides that all assets transferred to a surviving spouse upon death aren't subject to the estate tax. Transfers to qualifying charities also aren't taxable, along with costs related to administering the estate [source: IRS].

So if you've got it, flaunt it. But if you don't want it eventually going to the tax man, it's probably a good idea to start thinking about who you want to give it to.