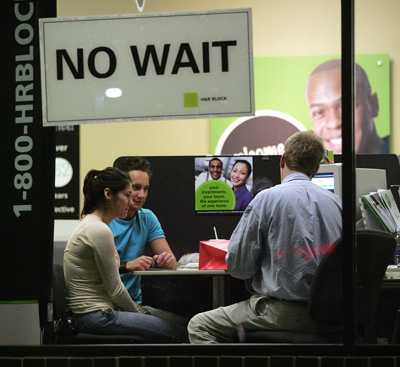 Back in high school, when you turned in a term paper late, your grade was probably reduced by your tardiness. The Internal Revenue Service operates on the same principle.

Even if you only need an extra week to file your return, use Form 4868 to file for an extension. A week may not seem like much, but you're better off avoiding the late penalty. U.S. taxpayers who live and work abroad have an automatic two-month extension to file their tax returns, putting their filing deadline at June 15. They do not have to file Form 4868, but when they file their returns in June, they must include proof that they do indeed live and work abroad. Note that for this extension, Puerto Rico does not count as "abroad." The IRS also extends an automatic 180-day extension to military personnel serving in combat zones and a one-year extension to victims of a "Presidentially declared disaster or a terroristic or military action" [source: IRS].

As mentioned, filing an extension does not suspend interest from accruing on your tax liability, nor does it necessarily prevent penalties for not paying by the due date.

So the sooner you pay off the unpaid taxes, the less you will pay in penalties.

If you file your tax return on time and apply for an installment agreement, the IRS reduces your late-payment penalty to 0.25 percent per month.

If you do not apply for the filing extension, the late-filing payment fee is 4.5 percent of the unpaid tax per month up to five months.

Let's take the above example again, in which you owe the IRS $5,000. We'll calculate the interest for one month.

So you would owe $325 for every month you don't pay on top of the $5,000 in taxes you already owe the IRS. Now, this simple example doesn't take into account any payments you make on your tax during the year, but it should give you an idea of how large tax debt can grow and grow. And making payments on your unpaid taxes is what an installment agreement is all about. Check it out on the next page.

If there's no way you can pay your taxes, you might be eligible to make an offer in compromise, which is simply "your best offer" -- you pay an agreed-upon chunk of what you owe. The IRS will accept an offer in compromise if it doubts it will ever be able to collect your full tax liability, or if collecting the full amount would "create an economic hardship" like putting you on the streets [source: IRS].