Do you get the standard deduction if you itemize? 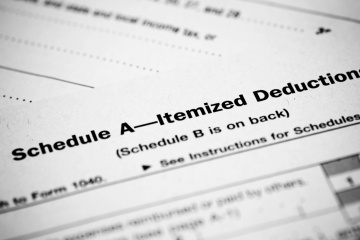 You'll be scarily familiar with Schedule A (Form 1040) if you decide to itemize.
emmgunn/E+/Getty Images

You know you're a grown-up when you find yourself seriously considering itemizing deductions on your tax return. It's not a choice that, say, a typical college student has to make. Why bother tallying and detailing the small costs and expenses of life when you could just claim that sweet standard deduction and move on?

And just to be clear from the get-go, it's either the standard deduction or itemized deductions: You can't do both. So let's talk a little bit about both options to figure out which one might be more lucrative for you.

The idea on the standard front is that the IRS figures out a fairly generous and flat-rate deduction; it changes depending on your status as a filer. For instance, if you're filing as a single person, your standard deduction is $6,200 (for 2014). Married and filing jointly nets you a $12,400 deduction. If you claim head of household (that's an option for unmarried people supporting dependents), you can count on $9,100.

The IRS said in a 2011 press release that nearly two out of three taxpayers were taking the standard deduction. And that makes a lot of sense for many of us; it's no small chunk of change, and it also relieves the burden of having to carefully organize the receipts and records we've collected over the year. But don't dismiss itemizing out of hand; it just might be beneficial for you.

The biggest trick to figuring out if you should itemize? Your mortgage interest. That sucker is entirely deductible. If the interest you paid on your mortgage is bigger than the standard deduction offered, you should probably go ahead and itemize, because all the other stuff -- charitable contributions, property taxes, state and local property taxes -- is just going to inch that deduction up higher and higher.

Do be aware, however, that some itemized deductions are subject to limitations. While you can deduct a host of medical expenses, most people can only write off an amount that exceeds 10 percent of their adjusted gross income. So, if you make $50,000, you can't write off the first $5,000 of medical costs, just the amount that exceeds $5,000. There are also a load of miscellaneous deductions, but you can only start factoring those in after they exceed 2 percent of your adjusted gross income.

So if you do itemize, you're not going to be able to take the standard deduction. But that doesn't necessarily mean it isn't worthwhile; check your mortgage interest and other expenses to see if it might make sense for you.