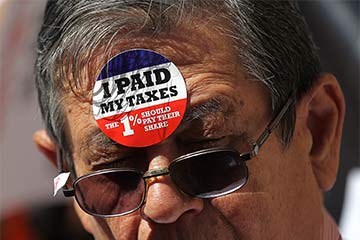 A protestor wears stickers on his face during a Tax Day demonstration in New York City. Dozens of protesters demonstrated against loopholes that allow banks and corporations to pay lower income taxes than most individual filers.
Justin Sullivan/Getty Images

In a series of semi-recent decisions, the U.S. Supreme Court has come to the grand conclusion that corporations are more or less people in the eyes of the law. As such, they have certain legal rights and protections. Just like you and me, they also have taxes to pay. It appears, however, that companies may be a little better than us regular folks at finding ways to cut down what they owe Uncle Sam at the end of the year.

The corporate income tax has been in place in the United States since 1909, the same year that the government decided once and for all to keep taking a piece of taxpayers' income for the public coffers. The tax derives from the power that was granted to Congress when the 16th Amendment was ratified four years later. It states that "Congress shall have power to lay and collect taxes on incomes, from whatever source derived, without apportionment among the several States, and without regard to any census or enumeration." In those early days, individual and business taxes were used largely to fund U.S. involvement in wars.

Today, the federal tax rate for businesses is the highest in the developed world, at as much as 35 percent. But not all income is considered "taxable" under the law. This is a shadowy, grey area that businesses often take advantage of to reduce their bills [sources: Tax Analysts, KPMG].

Unlike individual taxes, corporate income taxes are levied on net, not gross, income. In other words, the tax man gets a piece of a business' profits -- and not a piece of the total amount of money that the business brought in -- during a current year. The tax is also limited to actual corporations and doesn't include other business entities like partnerships, sole proprietorships and some closely held companies [sources: Norton, Bartlett].

Those companies that do pay the corporate income tax pay it only on money "made" in the United States. A wide range of some of the best-known businesses in the country -- a group that includes Apple, Microsoft and GE -- reportedly skirt that responsibility by dumping money into offshore havens where it's taxed at a lesser rate. This scheme is commonly referred to as tax inversion [sources: Dizard, Norton, Bartlett].

The whole system revolves around some pretty fuzzy accounting. Companies use a method called transfer pricing to essentially create transactions between the company and subsidiaries around the globe for the sole purpose of moving profits to more favorable tax environments. Their business operates in the same place and their workers and customers stay where they are. For tax purposes, however, much of the business' profit is treated as coming from outside the United States [sources: Drucker, Dizard].

Apple, for example, reportedly shifted $30 billion in income to an operation in Ireland over the course of four years. Just how many workers did the iGiant employ over on the Emerald Isle during that time? Zero. The money was taxed by Irish authorities at a rate of 2 percent [sources: Drucker, Dizard].

Some might call that fraud. Others may liken it to an expensive game of three-card monte. Whatever you call it, just keep your voice down. Corporations are just like people: They have feelings too.

Think your taxes are too high? The 39.6 percent excise rate for people in the highest income bracket in 2013 pales in comparison to those seen in the early days of federal taxation. Taxpayers coughed up as much as 94 percent of their income in 1944 in order to pay for the World War II effort [source:CBS News].

Should the Corporate Income Tax be Abolished?

So at least some businesses are getting better at avoiding -- or, more likely, lowering -- their corporate income tax burdens. The cat-and-mouse game that's already happening goes like this: Congress, the Internal Revenue Service and other federal agencies look to close loopholes in the current tax code while businesses and their lawyers go searching for new ones. In the meantime, some observers say that the U. S. should just scrap the corporate income tax altogether.

Those who would like to see the tax written off of the books say the idea that companies are actually paying the excise is an illusion. That's not just because businesses are making like Tim Cook & Co. and taking their talents to Ireland. Instead, they say, it's because businesses pass the tax burden over to consumers through higher prices or to employees via smaller paychecks, bonuses and benefits.

What's more, detractors say corporate income tax proceeds only amount to about 15 percent of the tax money that the U.S. hauls in each year [source: McArdle]. If businesses didn't have to spend so much time trying to lower their tax burdens, the thinking goes, they could be focusing on things like innovation.

On the other hand, the idea of letting companies operate tax-free while hard-working Americans continue to hand over a significant chuck of their paychecks to Uncle Sam simply strikes some people as wrong. Skeptics also say they're less than convinced that businesses will simply drop prices or increase pay if the corporate income tax were lifted. Plus, some individual tax dodgers would be able to dump their income into personal businesses to reduce their burden come tax time [source: Coy].

Then, of course, there's something to be said about keeping corporate power in check. In an era where companies can influence elections by spending unlimited sums at the political horse races and plunk down increasing amounts to woo lawmakers through lobbying efforts, perhaps the corporate tax is an antidote to the Supreme Court's idea of "corporate personhood."

Could income tax be replaced by a consumption-based sales tax?
10 Pieces of Bankruptcy Information Everyone Should Know
5 Questions to Ask Before You Refinance Your Mortgage