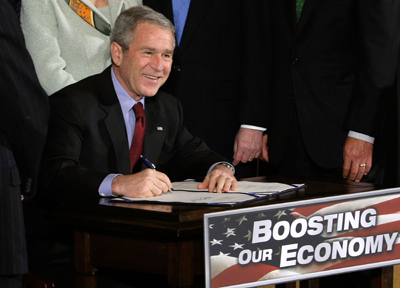 If you haven't received them already, you'll soon receive two letters in the mail from the Internal Revenue Service.

Chin up! These letters bear good news. The first will give you an overview of the Economic Stimulus Act of 2008, which includes the dispensation of tax rebates to taxpayers in the United States. The second letter will confirm whether you are eligible for the rebate, how much money you'll receive and when you'll receive it.

Indeed, one highlight of the Economic Stimulus Act, signed by President Bush on February 13, 2008, is a tax rebate, which is meant to encourage consumer spending. Rebates will go "to more than 130 million households" in the United States [source: IRS]. The Bush Administration hopes the Stimulus Act's "direct and rapid income tax relief" will stimulate the U.S. economy as recession looms.

So what's the catch? One of the great things about this rebate is that, unlike an income tax refund, the tax rebate is not taxable. Furthermore, the rebate will not affect any refund you might receive this year or next year. The Administration's hope is that this little windfall will encourage consumers to get out and spend some dough, thereby increasing business earnings and, hopefully, encouraging growth.

Ready to start spending your money? Not so fast -- check out the next page to see if you qualify for a rebate.

Citing tax rebates issued in 2001 and 2003, economists tend to agree that the Act will briefly stimulate consumer spending, which will help the economy over the short term. Many economists say that long-term measures need to be taken to boost investor confidence and to encourage business growth.

So, are the short-term benefits worth it? Read both sides of the discussion in Can tax rebates really prevent an economic downturn?