10 Worst Mistakes to Make on Your Taxes

Browse the article 10 Worst Mistakes to Make on Your Taxes 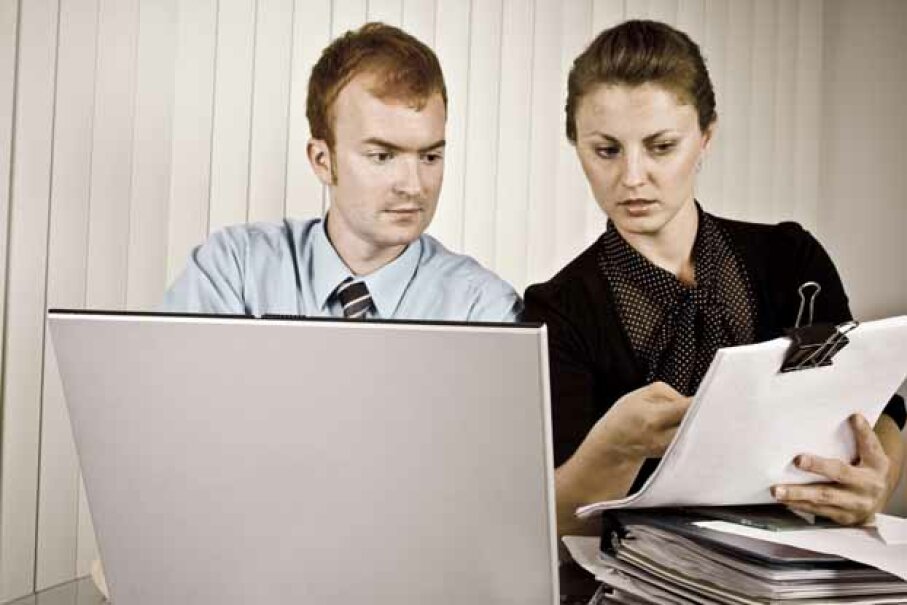 Which tax mistakes are you most likely to regret? See our list for answers. See our creative tax deduction pictures. iStock/Thinkstock

Yes, it's really happening again. As surely as spring follows winter and indigestion follows lunch at Long John Silver's, Tax Day will soon be upon us. File all the extensions you want, my procrastinating friend, but that blank 1040 isn't going anywhere. If there is a silver lining on the charcoal-black tax cloud that will soon engulf us, it's that you can avoid the very worst fate — an (IRS) audit — by dodging the 10 worst mistakes you can make on your taxes.

Should you prepare your tax return yourself or hire a tax pro? Do you really need to keep old business receipts for years and years, or can you throw a shredding party? Is itemizing deductions worth the headache? Keep reading for tips from tax experts and the big bad IRS itself for making the U.S. tax season as painless as possible (warning: still quite painful). 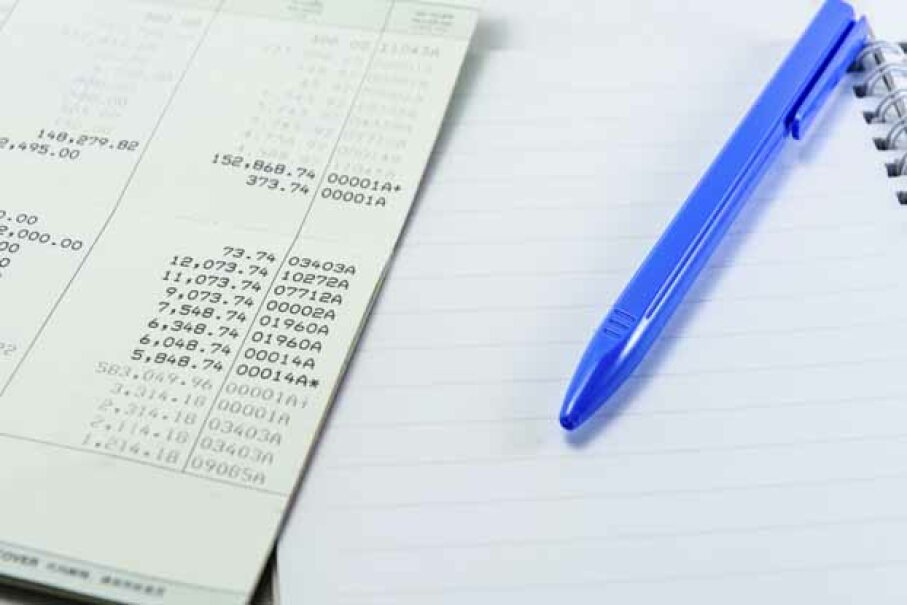 You should save any receipts you have to back up your tax write-offs. iStock/Thinkstock

The IRS is an oddly trusting institution. Filing a tax return is "voluntary," meaning that every taxpayer is responsible for filling out the right forms, and accurately and honestly reporting all income, expenses, deductions and exemptions. If you're lucky, that's the end of it. But if you're one of the roughly 1.5 million Americans who receives an IRS audit each year, it's only the beginning [source: McCoy].

When you file a tax return, the IRS doesn't ask you to staple receipts, bank statements or other paperwork to the back of the return. It's tempting, then, to think that you should feed these documents to the shredder. Bad idea!

True, the odds are in your favor that you will never have to show those investment account statements and Lowe's receipts to anyone. But if you are unlucky enough to trigger a red flag with the IRS computer, you will need to back up every number with a piece of paper.

In general, you should save the following documents for at least three years after filing a tax return [sources: Sandall, Wicker, IRS]:

Paying (or Not Paying) for an Accountant 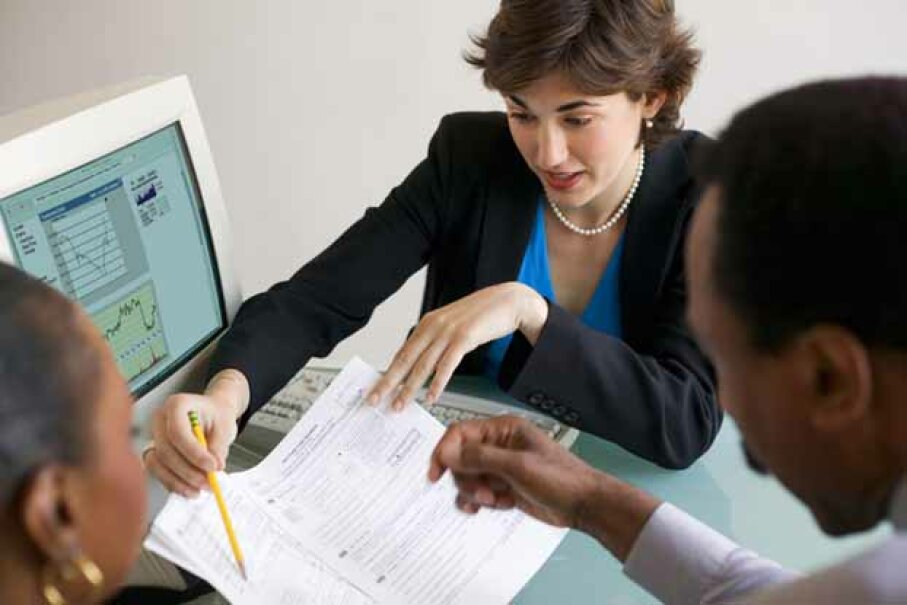 An accountant can be a big help in getting your taxes done correctly. But make sure you hire the right one. Creatas/Thinkstock

Most of us filed our first tax return when we were teenagers and the entire operation — copying a single number from a W-2 and entering it into the right box on the 1040EZ — took 23 minutes and a sharp No. 2 pencil. But there comes a time in every taxpayer's life we ask the anxiety-ridden question: "Am I making a huge mistake by doing my own taxes?"

As life grows more complicated, so do our finances. You get married, have a kid, buy a house, take on a side job, invest for retirement — all of these life events have tax implications, and overlooking them could be very costly.

You might decide it would be easier to hire some tax help. Here are some of the pros and cons [source: Phillips Erb]: 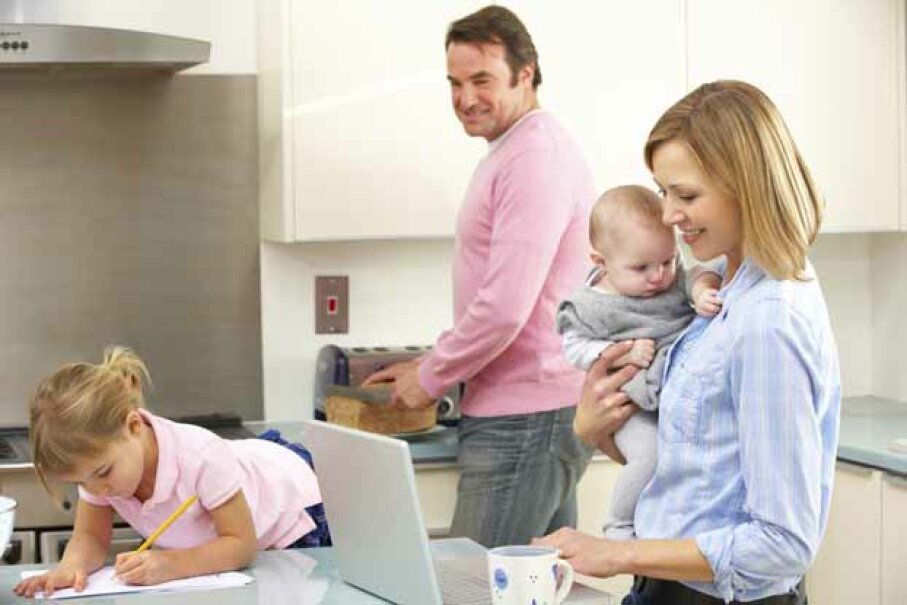 Make sure you and your spouse file your tax returns using the same staus. iStock/Thinkstock

The IRS offers different tax breaks, deduction limits and exemptions for taxpayers in different life situations. It makes sense that a married couple should be able to claim twice the standard deduction as a single person, or that a widow with a child shouldn't have to pay a higher tax rate just because she's technically single. As a taxpayer, you need to choose a filing status that accurately reflects your life status as of Dec. 31 of the tax year [source: IRS]:

For newly married couples, tax season is a useful exercise in spousal communication. Both parties need to be on the same page. If the husband files his return under "married filing jointly," but the wife files her own return as "married filing separately," they will have plenty of time to talk it over on the drive to their audit. The same is true for a married couple that files separately with one spouse itemizing deductions and the other claiming the standard deduction [source: IRS]. That's another IRS no-no.

For the record, legally married same-sex couples can claim married status on their federal tax returns even if they are not living in a state that recognizes their union [source: IRS]. Also note that you can only claim head of household status if you are "considered unmarried" by the IRS and you have dependents [source: Schnepper]. 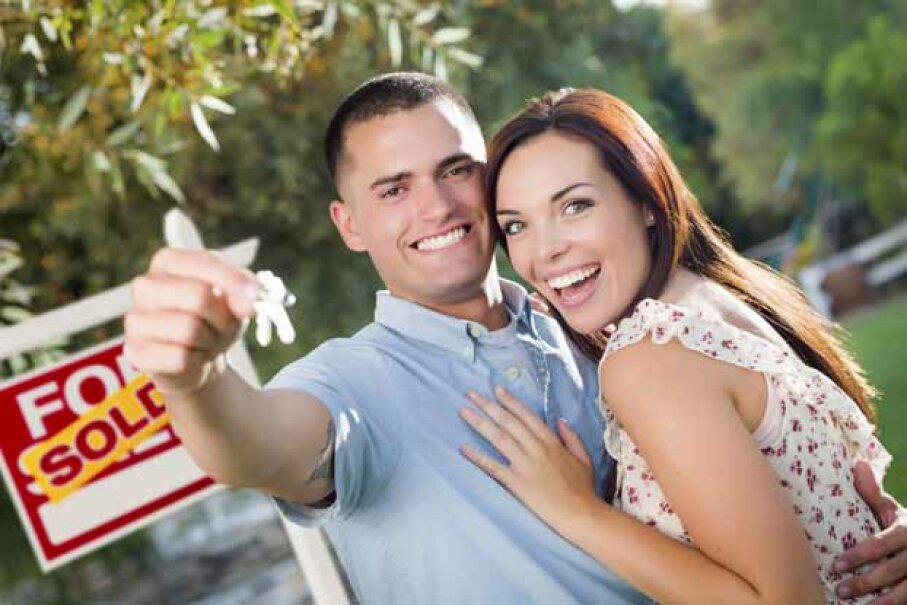 A new home can mean many new deductions, starting with the mortgage interest. iStock/Thinkstock

If you earn a modest income, those standard deduction figures are a huge help. But it's a big mistake to assume that the standard deduction is right for every tax situation. In some cases, the extra work of itemizing can save you a lot more money. Some examples [sources: IRS, IRS and IRS]: 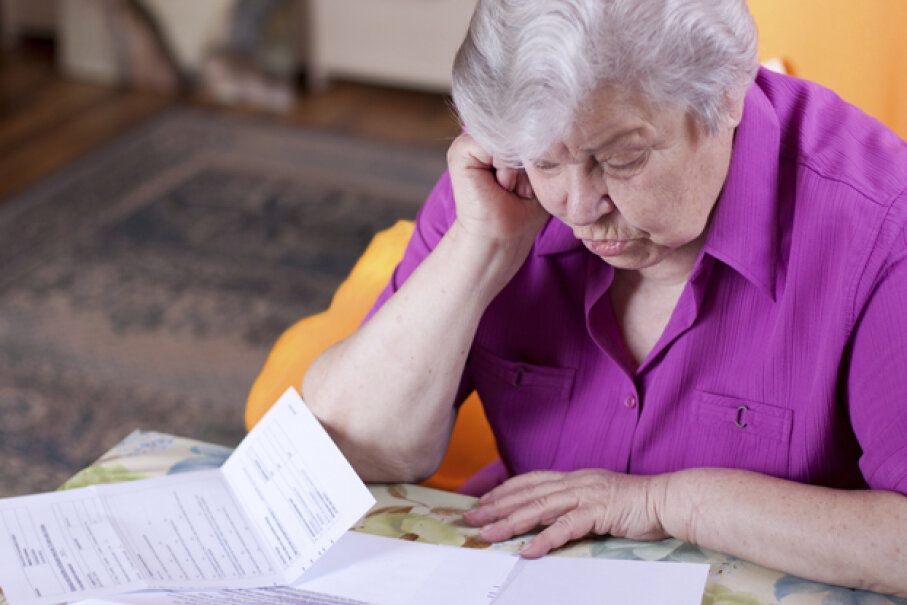 If you make a simple math error on your tax retun, the IRS will usually correct it without requiring you refile. iStock/Thinkstock

On a good year, American taxpayers make between 3 and 5 million mathematical errors on their federal tax returns. On bad years — such as 2001 and 2008, when stimulus credits messed with our math — those errors can skyrocket to more than 16 million [source: Rampell]. The good news is that a math mistake, even a big one, is not necessarily going to get you on the IRS's "naughty" list. In fact, the IRS computers are so skilled at correcting miscalculations that the agency doesn't require you to file an amended return [source: IRS].

Other number blunders could cost you, though. Accidentally claiming $9,100 in charitable contributions when you only made $1,900 is a matter you'll probably need to discuss with your friendly neighborhood IRS agent. 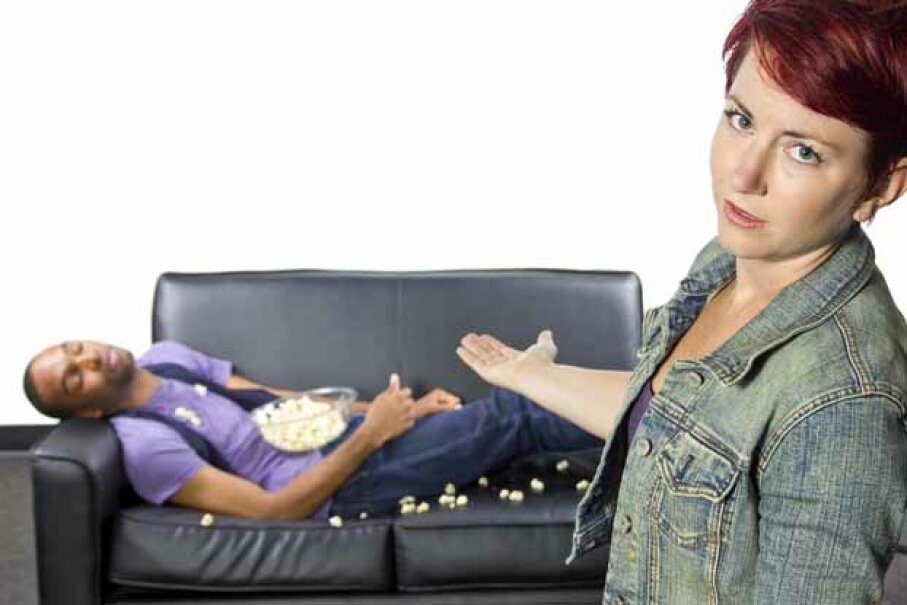 Surprise! You can claim your slacker boyfriend as a dependent if you paid more than half of his financial support during the year. iStock/Thinkstock

The IRS recognizes that raising kids is insanely expensive. Not to mention raising kids while supporting an elderly parent or a wayward nephew. That's why it offers tax credits to families with dependent children or relatives. But if you try to claim someone as a dependent who isn't a dependent, it will send your tax return straight to the trouble pile.

The IRS has established a long set of criteria for who qualifies as a "child." Here are the highlights [source: IRS]:

Dependents who are not children are called qualifying relatives. Here are the criteria [source: Block, Ebeling and IRS]:

Getting Greedy With Deductions 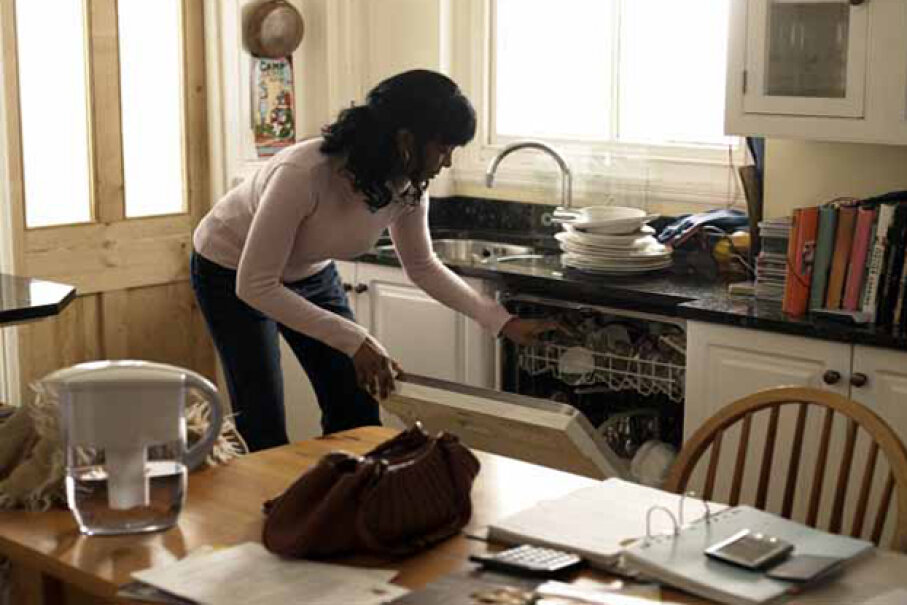 You can't claim your kitchen as your home office even if that's where you do all your office work. iStock/Thinkstock

It's easy to get carried away when you start itemizing deductions, especially if you own your own business. The more receipts you add to the expense pile, the lower your taxable income. Suddenly every Office Depot purchase and Panera breakfast starts to look like a legitimate business expense. Be super careful, though. The IRS might start to wonder how a taxpayer whose business routinely loses money can afford a $3,000 mortgage payment and four dependent kids.

Here are some tax deductions traps to avoid [sources: IRS, Bell and IRS]: 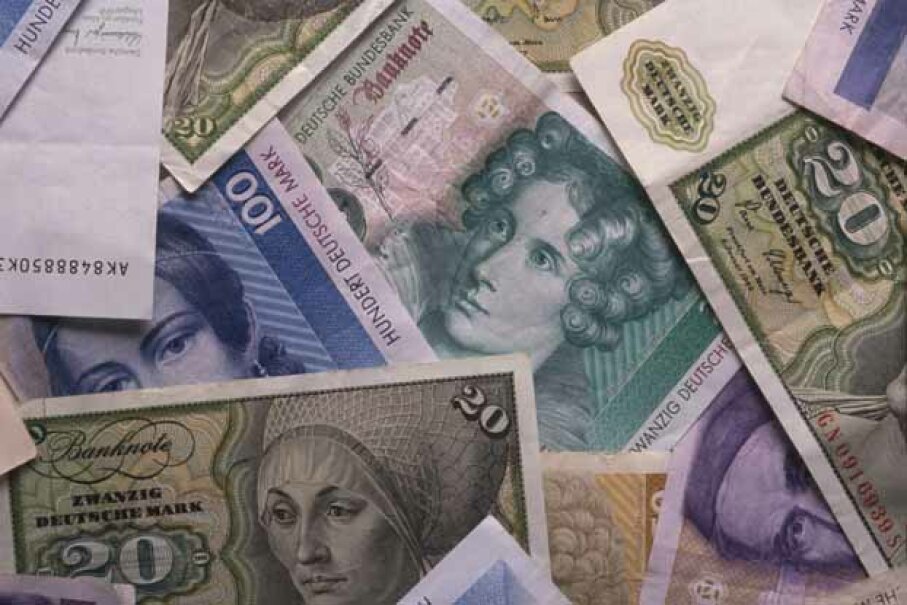 If you have an overseas bank account, you must declare it. Ingram Publishing/Thinkstock

The IRS is nothing if not exhaustive (and exhausting). It wants to know about every red cent you earned during the tax year, whether it was through a full-time office job, a home-based cupcake business or part-time waitressing gig for tips. If you are paid by direct deposit, check, cash or rolls of pennies, it all counts as earned income.

The IRS receives copies of all W-2s and 1099s sent by your employer or clients, so there's no getting around that income. But don't be fooled into thinking that cash income, payments from foreign companies, and other types of income that don't generate a W-2 or 1099 are somehow immune to taxation.

This is the "voluntary" part again. It's up to the taxpayer to honestly and accurately declare all earned income. If you are audited, the IRS is going to ask for copies of your bank statements. If you can't explain where all of these mystery deposits came from, you will be in deep doo-doo.

Getting a Refund Anticipation Loan 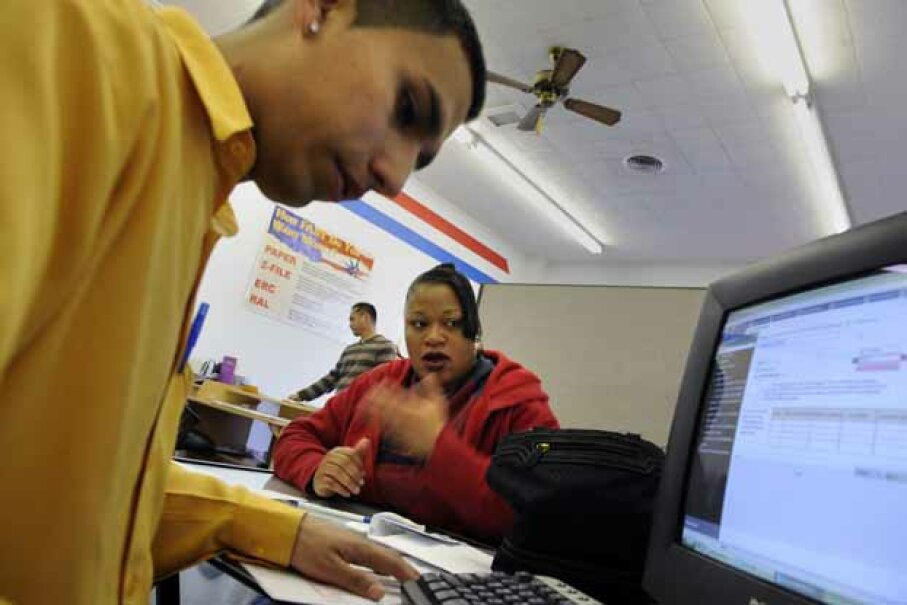 Back in 2009, Keisha Scott watched Jeremy Turja work out her refund anticipation loan at Liberty Tax Service in Denver. Fortunately, these loans are now largely a thing of the past. Joe Amon/The Denver Post via Getty Images

A tax refund check is a beautiful thing. The IRS says that it issues 90 percent of them within 21 days of receiving a tax return [source: IRS]. But what if you can't wait that long? Aren't there ways to get that fat refund check sooner?

Technically, yes, but you'll pay dearly for it. The first method is called a refund anticipation loan or RAL. Here's how RALs work:

Thankfully there's been a crackdown on RALs, which were marketed mainly to low-income and elderly taxpayers. In their place, some lenders are peddling refund anticipation checks (RACs). These are designed for folks who are getting a refund but don't have a bank account. The lender opens a temporary bank account to deposit the refund and charges steep fees (somewhat less than RALs) to withdraw the cash. Since the money doesn't come to you any faster, the main "benefit" is that the RAC allows the taxpayer to avoid paying the tax prep fees up front [source: NCLC].

Avoid the fat fees by setting up your own bank account to have the check directly deposited there. Then get free help with your taxes from the Volunteer Income Tax Assistance program. 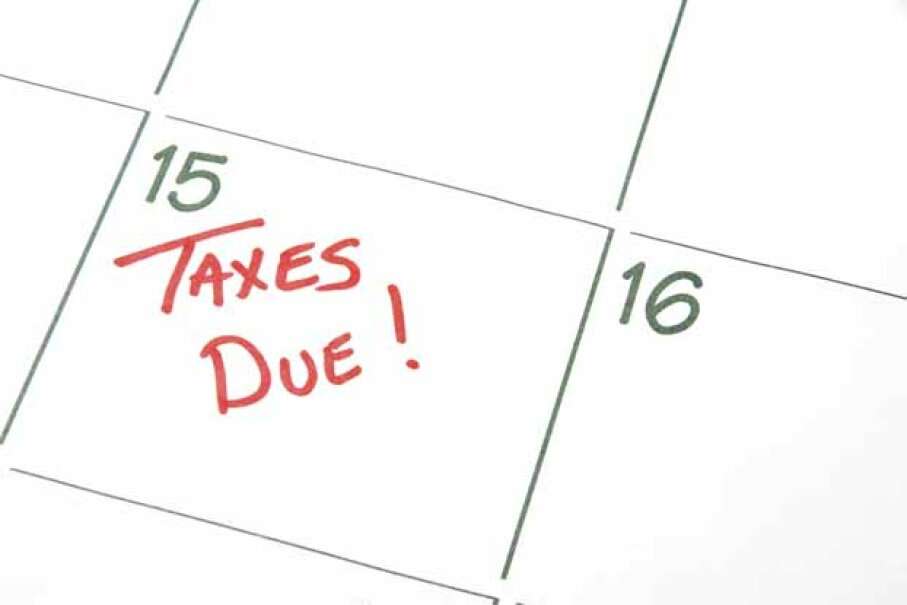 Even if you get a filing extension, you must still pay what you believe you owe by April 15. iStock/Thinkstock

The IRS takes its deadlines seriously. That means that all tax returns, plus checks for any taxes owed, must be stamped or filed electronically by April 15 or bring on the penalties! But what if you don't have enough money to cover the taxes you owe? Should you postpone filing until you have the cash to cover your bill?

Here's what the IRS says:

For lots more tax preparation tips and mind-blowing top 10 lists from HowStuffWorks, check out the links on the next page.

Author's Note: 10 Worst Mistakes to Make On Your Taxes

Nobody hates Tax Day quite as much as the self-employed. As a freelance writer, I don't have a "boss," which is awesome 364 days of the year. The one benefit of having a boss is that your income taxes are subtly skimmed from each paycheck. In fact, it's easy to forget that you're paying taxes at all until April 15 rolls around and Uncle Sam owes you a big fat refund check. For us freelancers, the exact opposite is true. When we get paid, no taxes are withheld. Once the money is in the bank, we pay the mortgage and buy the groceries and think that everything is super-duper until Tax Day rolls around and — BAM! — we have to pay the entire year's taxes all at once. To be honest, that's the not the way it's supposed to work. In fact, the IRS insists that freelancers, contractors and other self-employed folks file quarterly estimated taxes. There's a small penalty if you don't, but the bigger punishment is writing a huge check in April for money that may or may not be in the bank. After years of April agony, we've finally boarded the estimated taxes train. Now our tax pain is spread out in four equally irritating installments. Thank you, IRS.