10 Tips to Avoid an IRS Audit 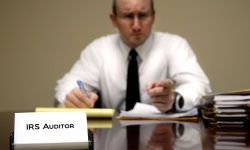 You don't want an audit. But if you find yourself facing one, don't panic. In many cases, it's just a matter of verifying information on your return.
© eric1513/iStockphoto

IRS tax audit. The very words can instill fear in the hearts of even the strongest, most honest men and women. Relax. We're here with some tips to help keep auditors from knocking on your door in the dead of night.

First off, remember that an audit is just the IRS asking for an explanation or proof of the information you've provided on your return. Assuming you are strong -- and honest -- you will have the necessary documentation to back up your claims. And if you've made an honest error, the IRS will generally just ask you to pay the difference -- or maybe they will owe you money -- along with interest and a penalty.

Still, your goal is to avoid an audit altogether, if possible. So, read through our list of tips designed to help you have as little IRS contact as possible.

You know those W-2 and 1099 forms you get in the mail at the beginning of the year that show the income you've earned the previous year? Well, the IRS gets copies of those too. So, be sure to include every single one on your tax return. The IRS's supercomputers match the amounts and may come after you if they show you received one that you didn't include with your return. If you receive a form with an incorrect amount, get in touch with the issuer and ask that a corrected form be sent to both you and the IRS.

And just because you work in a profession where a lot of cash changes hands -- you wait tables or cut hair, perhaps -- that doesn't mean you can sock those tips away unreported. Again, those supercomputers crunch the numbers and spit out guidelines for IRS agents, with pointers on how to dig out unreported cash income. They will find you and the cash you have stashed in your mattress.

9: Hire an Accountant or Use Software

Old wives' tales abound in the world of taxes, and one of the most common is that professionally prepared tax returns are less likely to be audited. While there's little data to back up that superstition, it doesn't hurt to have a pro do your taxes, especially if your personal financial situation is complicated or you own a business. Tax preparers can help you get all the deductions you're entitled to and make sure a complex return is filed correctly, which may help keep the IRS from tagging your return.

If your situation is more straightforward, a commercially available tax-prep package such as TurboTax or Free File, the free program offered by the IRS for people making under $58,000, may be a good alternative [source: IRS Free File]. These programs not only do the math for you -- making them a big plus for those of us who are more word savvy -- they ask questions to help ensure you're including all of the deductions that apply.

The audit percentages increase from there as income rises. Nearly 30 percent of the highest earners -- those earning and reporting $10 million or more in income -- were audited that same year. What this all means is that the likelihood of an audit is pretty low until you start making six figures -- and even then, the chances aren't especially high.