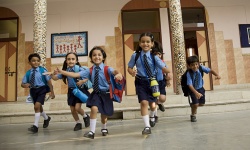 They may be youngsters now, but soon enough they'll be college age. 529 plans can help with those expenses, even if contributions to them aren't tax-free.
Amit Somvanshi/Thinkstock

5: Take Advantage of a Flex Plan

We've talked about some ways that itemized deductions can only lower taxes in specific ways. For instance, itemizing medical expenses doesn't always pay when you can only write off the excess of 10 percent of your adjusted gross income. But what if we told you there was a handy dandy way to pay off those medical expenses tax-free, regardless of whether you itemize?

It sounds like a too-good-to-be-true infomercial ("How can that towel absorb so much liquid?!"), but it's written right into the tax code. If your employer offers a flexible spending plan as part of your medical package, put the maximum $2,500 into it [source: IRS 969]. The money is taken directly from your paycheck, and you don't have to count it as income, thus lowering your taxes -- and possibly your tax bracket.

A health savings account can also lower your taxes. While it won't decrease your income, you can deduct the contributions on your return -- even if you don't itemize.

4: Invest in a Tuition Plan

Medical expense accounts aren't the only way to squirrel away some of that sweet income into funds that Uncle Sam can't touch. If you're desperate to make that tax bill shrink, you might want to consider putting some of your savings into a spot that's more specific than your bank account.

If part of your savings is going to a child's college education (or yours, or anyone's), you can start investing the money in a 529 plan. These plans are sponsored by either a school or state, and they offer a few benefits to make saving for college a bit easier. Now don't think you're just going to plop money into the account and watch your income (and tax bracket) shrivel. Contributions from 529 plans aren't tax-free; you can't deduct them. But any earnings they make are not taxable and usually don't require state taxation when you use them for college expenses [source: IRS 529].

So in the long run, putting your college savings in a 529 plan might be a lot more useful than letting it sit in a savings account.

We're not necessarily recommending marrying or breeding your way to lower taxes here. While there probably have been people who have paired off or multiplied for the tax break, I think most of us can agree that it's not really worth it to raise a human being (or go through a costly divorce) for a few thousand dollars a year.

That said, if you are contemplating one of those life events, you may want to consider when the best -- or worst -- time to plan a child or marriage might be. If you're saving money by taking a marriage standard deduction, you really should try to make it official before year-end. If marriage isn't helping your tax bill, consider waiting until next year, when you have more time to plan for measures to help lower your tax bill throughout the year.

As for kids, think ahead by requesting less withholding on your W-4. Because kids bring you a tax break, you can increase your take-home pay from the get-go without seeing a pinch come April.

When people get nervous about taxes, they're often imagining some scenarios that aren't wholly realistic. They'll accidentally leave out huge chunks of income. They'll forget to claim their kid as an exemption. Realistically, that probably won't happen. But it is even less likely to happen if you're filing electronically, since a lot of the tax preparation software that's offered guides you through your return and asks you if you've missed anything.

The IRS usually finds that about 20 percent of paper returns have errors, while electronic returns come back with less than 1 percent [source: TurboTax Tips]. You could be saving yourself taxes -- and the cost of an audit, remember -- by filing electronically from the start. Don't forget that a refund is also going to come your way much faster if you file online. While it might not lower your taxes, it's an added bonus that nobody would scoff at.

After all our talk about how empowered and capable you should feel doing your own taxes, are we betraying our theme by telling you to hire someone to prepare your return?

Absolutely not. While most people can easily and simply do their taxes, there's no shame in hiring someone to make sure you're getting the best breaks you can. And remember that not all tax returns are created alike; if you have complicated investments, losses or earnings, it's prudent to take some of the guesswork out of your return. Even if you've had a big life change in the past year -- say, a divorce or child support adjustment -- you might not be fully aware of how it impacts your taxes.

Hiring an accountant or tax preparation professional could lower your taxes, and it certainly could save you some time if you're scratching your head over some of your income.

There's not really a surefire way to lower your taxes for everyone. But nearly everyone can find room in his or her own specific situation for a little bit of improvement. It might involve a little research (like finding out whether itemizing makes sense), but even something like opening a 401(k) or retirement account could pay off not just with lower taxes now, but a vast future improvement as well.