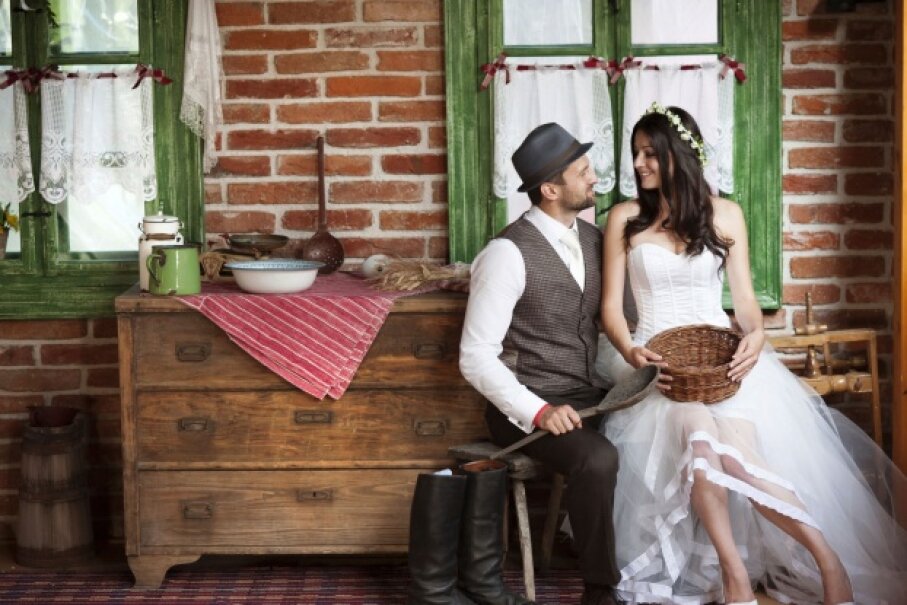 Newlyweds: Enjoying the bliss of celebrating their love, and an assortment of changes to their finances. © pojoslaw/iStockphoto

If your status went from single to married, it's time to take a look at the way that brand-new relationship may have had an impact on your taxes. Your marital status as of Dec. 31 determines whether you file as married or single. If you tied the knot on Jan. 1, you've got one more year of single status -- at least in the eyes of the IRS.

One huge change to marital status is the recognition by the federal government of same-sex marriage. Congratulations! Those of you in a same-sex marriage may now participate in all of the married-filing-jointly -- or separately -- hoopla that heterosexual couples have enjoyed for decades.

As you read through our tax tips for married couples, think about your own financial situation. Not all of the tips will apply in every case. And for your first couple of years of married life, you may want to figure your taxes both ways -- jointly and separately -- to see which way is best for you.

Get the Word Out 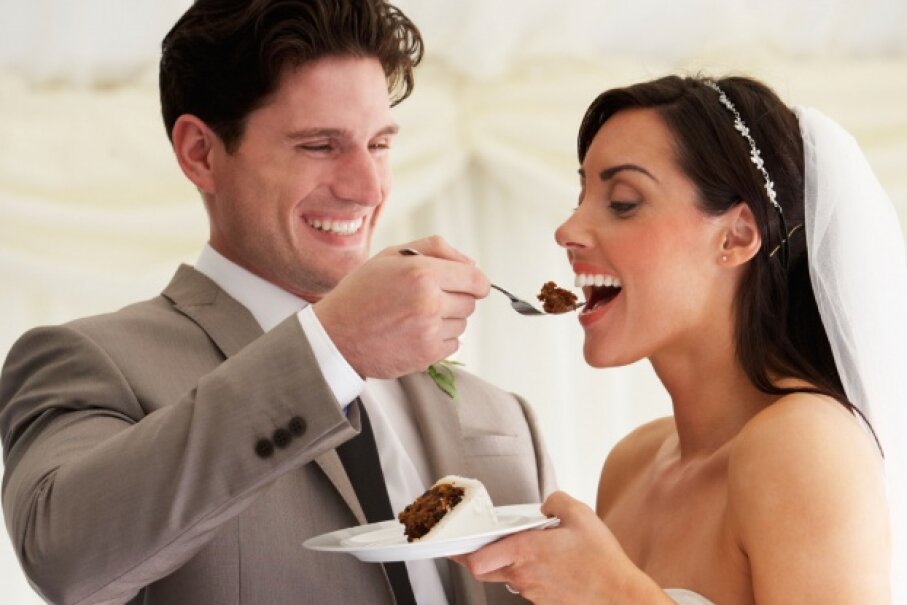 Once you’re done celebrating, make sure you file all the required paperwork. © omgimages/iStockphoto

If you're recently married, add the IRS to the list of recipients of your name and address change information. If you changed your name, start the name-change process with the Social Security Administration. The updated information will flow from Social Security to the IRS, so you will not have to inform them separately. If you try to file your return under your new name, without having changed it with Social Security, the IRS will likely have a number of questions for you, and it may hold up any anticipated refund.

As part of the name-change process, remember to fill out any employer-required paperwork. You may need to change the amount of taxes you have taken out of your pay, and you will want to be sure your employer is paying any taxes on your behalf under the correct name and marital status. 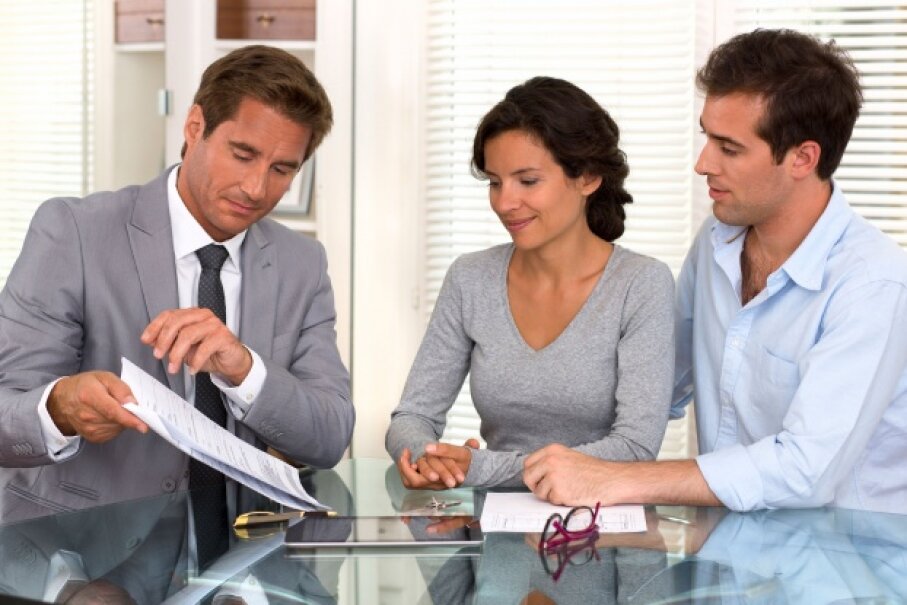 Meet with your accountant or a tax professional to decide if filing jointly is the best plan for you. © LDProd/iStockphoto.com

As a married couple, you have two options for filing your taxes: married filing jointly and married filing separately. Most couples file jointly, because it usually results in fewer taxes. There are a couple of reasons for this:

On the negative side of the filing jointly equation, once the return is signed, you and your spouse are both responsible for everything on it, no matter who fills it out and makes the decisions. If your spouse took some deductions you aren't sure about or bent the truth just a little and the IRS catches up with the mistake, you are equally liable for it. If you have some concerns, file separately. 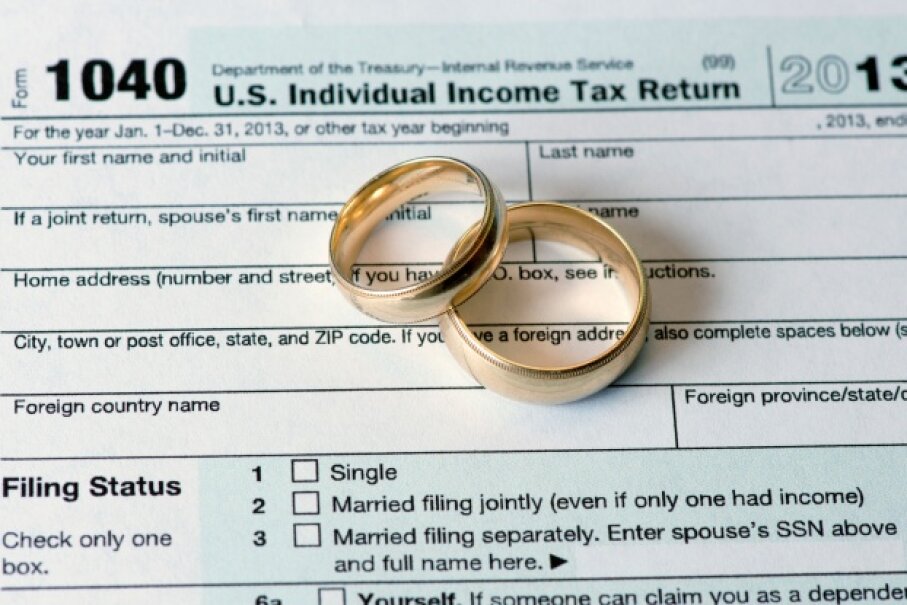 There are scenarios where filing separately is the smarter move. © dina2001/iStockphoto

While most married couples file jointly, there are instances when filing separately will result in a lower tax bill. For example, if one spouse has high medical bills or has debts from before the marriage that are past due, such as child support, these debts could be collected out of any tax refund. If you file separately, the debts would be collected out of the responsible party's refund, rather than out of a joint refund. 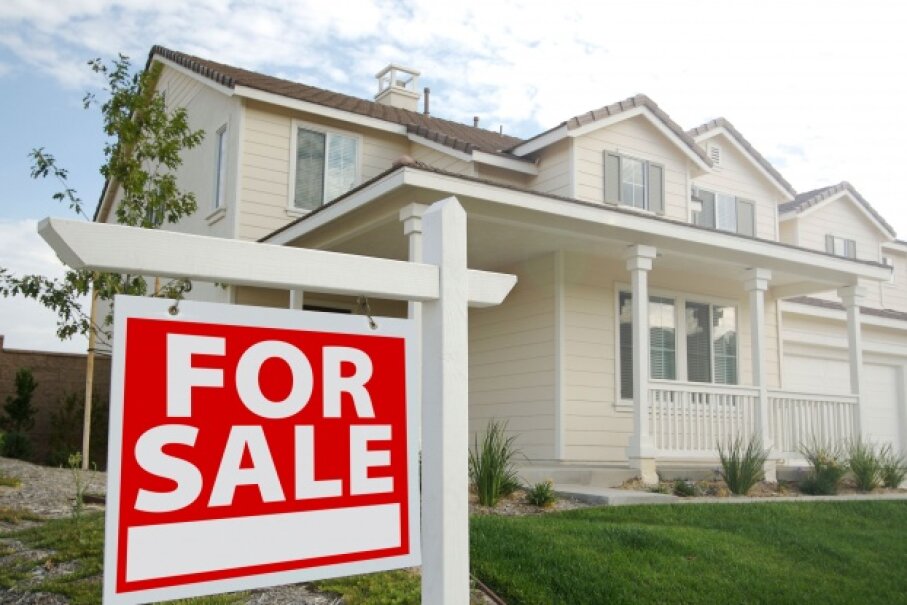 Married people get a big income exclusion on their taxes when they sell a house. © Feverpitched/iStockphoto

When it comes time to sell a home, married folks have a huge advantage over singles in the tax department. If you make money on the sale of your home, as a single person you may be able to exclude up to $250,000 from your income. Married couples filing jointly may qualify to exclude up to $500,000 from their collective income.

To qualify for the home sale exclusion, you must meet the ownership and use test, which means that you must have owned and used your house as your main home for at least two out of the five years prior to selling. The two years don't have to be consecutive -- you can use the home for a month here and there so long as it adds up to two years. So remember, if you're getting married, it might make sense to wait until you've tied the knot to sell the house. 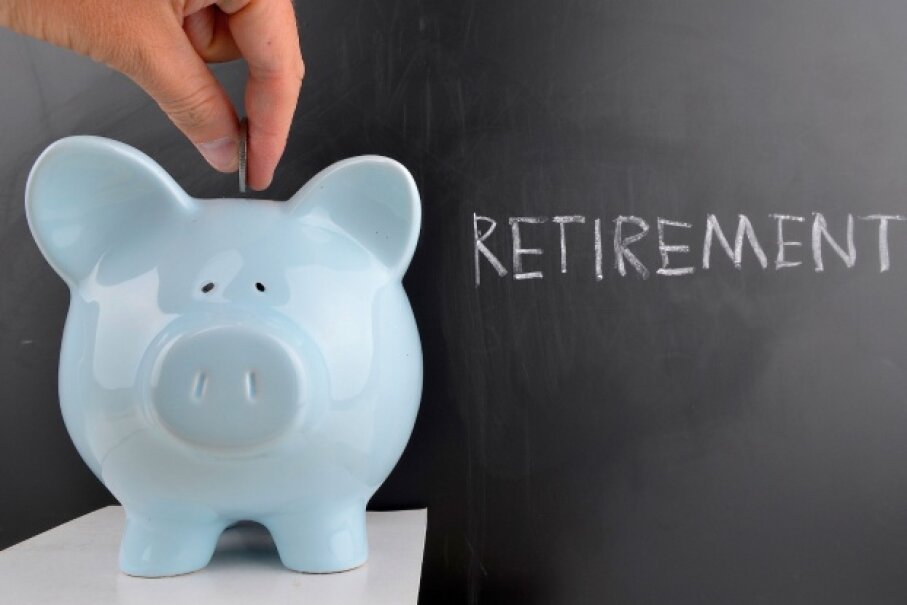 Married couples get some major benefits when it comes to retirement savings. © s-c-s/iStockphoto

An IRA, or individual retirement account, provides not only a way to save for retirement, but also tax advantages -- especially for married couples. In 2014, the contribution limits for either a Roth or traditional IRA are the lesser of $5,500 ($6,500 if you're over 50) or the sum total of your income for the year. That means that if you're single and have no income, you may not contribute to an IRA.

Here's where the marriage benefit kicks in. If one spouse works and the other spouse does not, the jobless spouse can still contribute to an IRA -- up to the maximum amount, if the working spouse makes a qualifying income and you file your taxes jointly.

So start saving already. You can get the benefits of compound interest and reduce your tax burden as well. 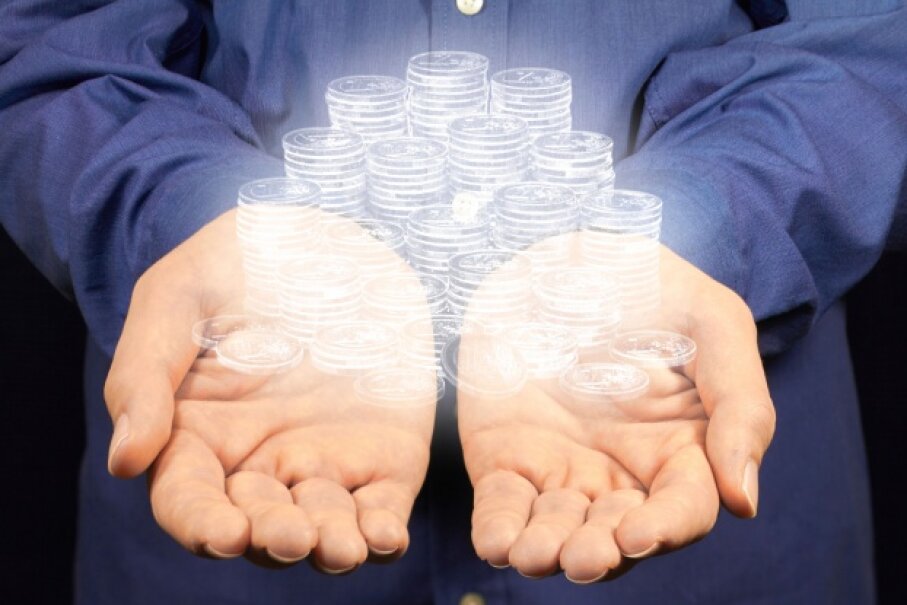 If you’ve heard scary stories about the marriage tax penalty, good news: It’s a thing of the past. © foto-ruhrgebiet/iStockphoto

You may have heard tell about a marriage tax penalty. Back in the day, it was spoken about in hushed tones and back rooms, like a discussion of the boogeyman. The penalty worked like this: If both spouses had jobs and filed taxes jointly, their combined income was taxed at a higher rate than if they had filed separately or if they were earning the same amount of money as singles. Congress did away with this penalty, however, for the lower and middle tax brackets, and now couples are more likely to get a marriage bonus -- which means they pay less in taxes by filing jointly than they would have as singles. This bonus is greatest when one spouse earns considerably more than the other: Filing jointly can bring the higher earnings into the lower earner's tax bracket. 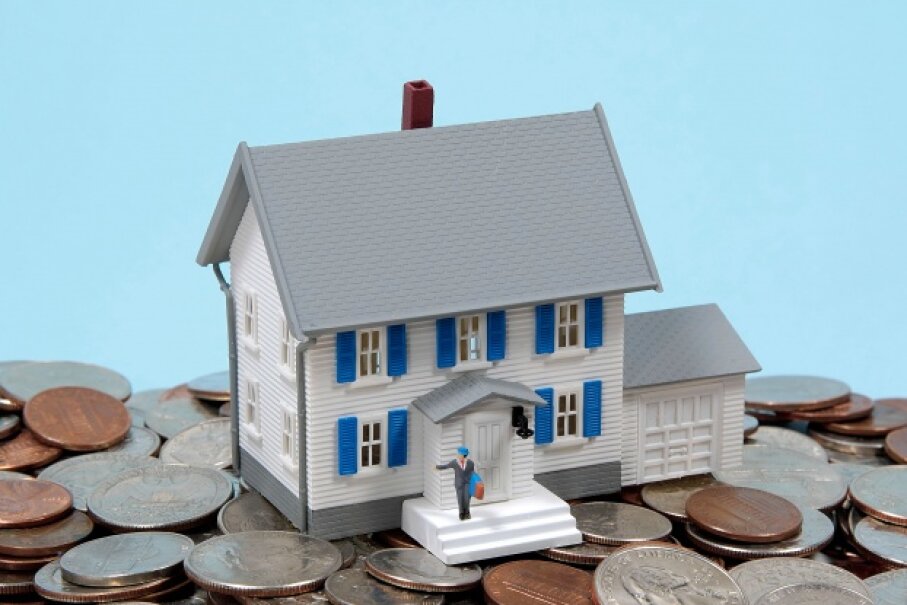 The estate tax marriage deduction protects the surviving spouse after the other has passed away. © webking/iStockphoto

We've all heard the old saying: "Nothing is sure but death and taxes." And sometimes with estate taxes, you get to experience both at nearly the same time -- unless you're married. If your spouse passes away, anything included in his or her estate and left to you as the surviving spouse becomes eligible for a huge tax break known as the estate tax marital deduction. Everything that is part of the estate passes to you with no federal taxes to pay.

The IRS actually considers this a tax deferment. They will collect their share of the estate once it passes from you to your heirs. The estate tax marital deduction buys the surviving spouse some time, however, to make changes to the estate that will ease the tax burden on his or her heirs [source: IRS Estate]. 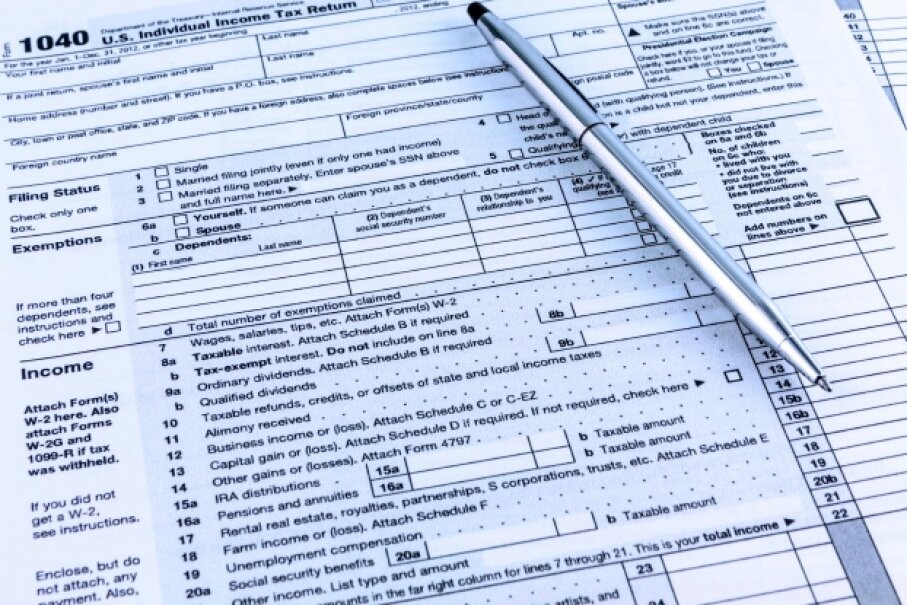 The standardized deduction will save you time – but if your itemized deductions add up to more, it’s worth the extra work. © Bunwit/iStockphoto

Most people who own a house, paid a hefty amount of medical bills in one year or made a large charitable donation itemize these and other deductions on their federal tax returns. If this is you, have you ever considered using the standard deduction? If you take the standard deduction, you don't itemize, you just deduct $6,100 if you're single or married filing separately, or $12,200 if you're married filing jointly. 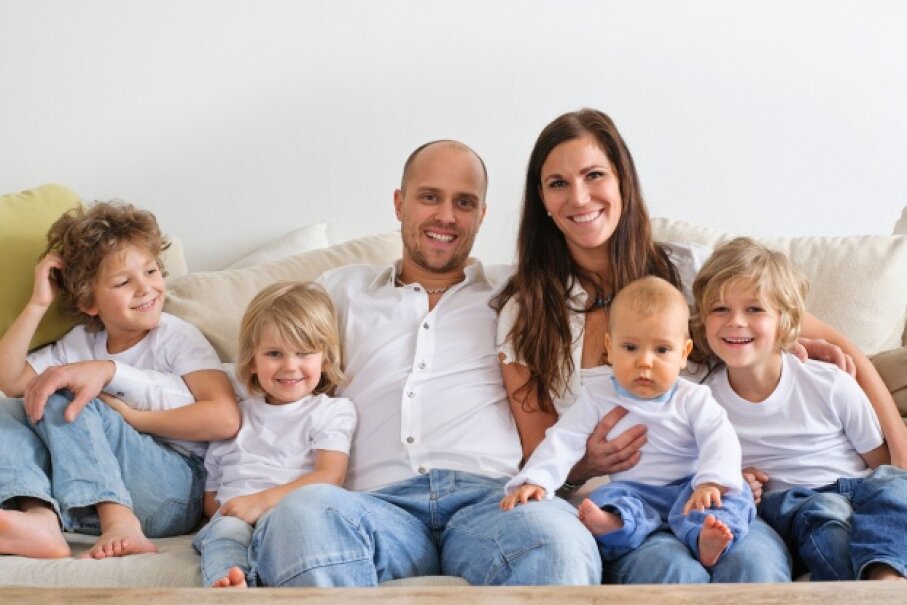 It’s no secret that raising kids is costly, but qualifying families can use the child tax credit. © Brendan Delany/iStockphoto

First up, there's the child tax credit, which lets you reduce your federal income tax by $1,000 for each qualifying child under age 17. If you and your spouse make a combined $110,000 or more, the credit is phased out [source: IRS Child].

Next is the personal exemption. For 2014, you may take a personal exemption of $3,950 for everyone in your family, including all children. Unfortunately, the family pets don't qualify [source: IRS 2014 Benefits].

For low-income earners, the Earned Income Tax Credit kicks in. The largest credit is available for couples with three or more children who earn $52,427 or less and file jointly. If that's the case for your family, you can claim a credit of $6,143 for tax year 2014 [source: IRS EITC]. 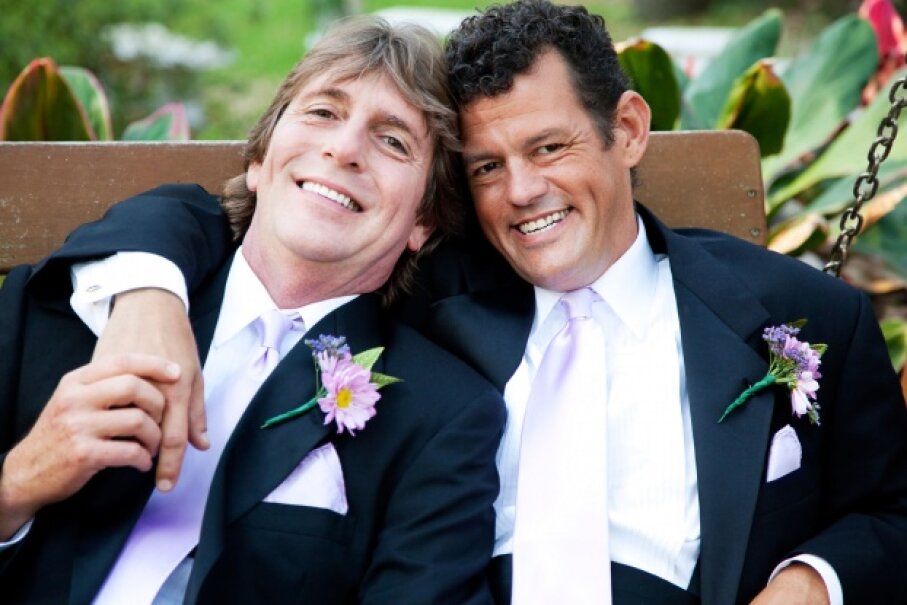 Same-sex couples can now file federal returns with a married status, but they must have been married in a state that legally recognizes the union. © lisafx/iStockphoto

That ruling, as well as new IRS regulations, means that you and your same-sex spouse can now legally take advantage of all of the married tax benefits in this list. Keep in mind that this ruling has nothing to do with state taxes. You may still have to file your state tax returns individually.

As I write this, I've just been through a divorce. Writing about the tax advantages married couples enjoy isn't quite as bad as pouring salt into a wound, and it certainly isn't a good enough reason to stay in a bad marriage, but it has been eye-opening. With this year my first to file as a single person in 27 years, I've been paying attention to these tips. Now, if I can only figure out a way around some of them!