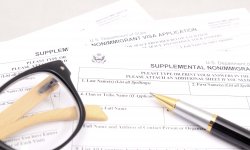 Dual-status aliens are people who have worked in the U.S. under two different residency statuses during the year.
LYAO/iStockphoto/ThinkStock

For example, if you are a nonresident alien, you will not be able to claim the standard deduction unless you are a student or business apprentice from India. However, generally, you can claim deductions on income that is related to your business activities and earnings in the U.S., and itemize certain deductions such as charitable contributions, state income taxes and some business expenses [source: IRS].

Keep in mind that when you are considered dual-status, you will need to toggle between which deductions you are allowed on income earned either as a resident alien or nonresident alien during the same year [source: IRS].

4: Know Which Exemptions to Claim — and When

When you're a resident alien, you're able to claim all the same exemptions as a U.S. citizen, such as dependents.

There are certain exceptions. For example, U.S. nationals or residents of Canada or Mexico may claim additional exemptions for spouse and dependents under certain circumstances, such as when a spouse has no gross income and cannot be claimed as a dependent of another U.S. taxpayer or when dependents qualify under normal dependent regulations [source: IRS].

For most people, filing a solitary federal tax return is the norm. For dual-status taxpayers, however, filing federal taxes is a bit more involved.

A dual-status taxpayer will need to file two tax returns for the year, one for the portion of the year when the person was a nonresident and another for when the person was a resident alien. As if this weren't complicated enough, you'll need to know which forms to file at the end of the tax year based on your status at the end of the tax year. For example, if you end the tax year as a resident alien or a resident, you will need to file Form 1040. At the top of Form 1040, you'll need to write "Dual-Status Return" and then attached a statement to the return that illustrates your income for the portion of the year when you were a nonresident. You may be able to use a Form 1040NR or Form 1040NR-EZ as the statement, as long as you write "Dual Status Statement" across the top.

A nonresident alien, on the other hand, will need to file Form 1040NR or Form 1040NR-EZ. This would be applicable to a dual-status taxpayer who does not reside in the U.S. on the last day of the tax year and who is not a U.S. resident at the end of that same year. When filing, "Dual-Status Return" will need to be written across the top of the return and an income statement will need to be attached [source: IRS].

2: Elect to Be Treated as Full-year Resident

If you are not a citizen of the United States, and even if you live and work in the U.S. for only part of the year, you may be able to file your federal income taxes as a full-year resident. This option may be especially attractive during a dual-status transition year because electing to be treated as a full-year resident in the U.S. allows the taxpayer to file only one tax return instead of two. Otherwise, the taxpayer would need to file a tax return in the United States and the country in which he or she is a citizen.

In order to be considered a full-year resident during a tax year, certain conditions must be met. For example, the option is open only to nonresident aliens who are married to a person who is either a citizen of the U.S. or a resident alien of the U.S. Plus, both spouses must agree for the nonresident alien to be treated as a full-year resident. To make this election, both spouses must sign a statement and attach it to their tax return, and the status will remain in force until either spouse's citizenship status changes — or a requested revocation, separation, divorce or death occurs [source: KPMG].

One of the chief benefits to being treated as a full-year resident centers around filing a joint tax return, which we explore in more detail in the next section.

1: File as a Full-year Resident

While the option of filing a joint tax return only applies to people who are married, it offers a number of tax benefits, including the ability to stay within a lower tax bracket or take a higher standard deduction. In fact, standard deductions aren't available to dual-status aliens as a general rule [sources: KPMG, IRS].

It seems as if the many rules of federal tax are matched by nearly as many exceptions to the rules. Sometimes, there are even exceptions to exceptions. It's especially important to understand the complexities of federal tax code and, if you are a non-citizen of the United States, how a tax treaty with your country of origin may affect the taxes you file in the U.S.