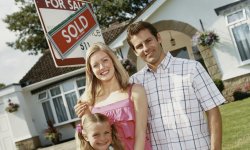 Buying a home is one of the ways a family can get a tax break.
Digital Vision/Photodisc/ThinkStock

Everyone knows that one of the best reasons to have a family is to get those sweet, sweet tax breaks. Kids also fill your heart with joy and make you a better, more selfless person or whatever, but come April, love doesn't pay the bills.

But how can you make the most bank on your brood? You might want to consider taking the standard deduction if you don't think you'll be able to itemize enough deductions, for one. (Remember that if you're itemizing, you can only begin writing off deductions after you exceed 2 percent of your AGI.) But we'll include tips for families that are itemizing and taking the deduction to ensure that everyone can get the biggest piece of the pie they can.

Very rarely does someone have to remind a parent -- in the midst of tax season -- to remember the children. When each one nets a sweet $3,950 exemption, it's unlikely that a parent will forget Kevin sleeping in the attic when it comes time to fill out the old tax return [source: Phillips Erb].

But it's important to remember that it's not just biological or adopted children you can claim: Stepchildren, foster children, siblings of any of your children or their descendants can count as "qualifying children" too. Qualifying children must live with you half the year, be under 19 years of age (24 if a full-time student) and be unable to provide more than half their own support.

The nice thing about claiming a child exemption is that it isn't just a credit on your tax bill. It's actually lowering your entire adjusted gross income (AGI), which could theoretically put you in a lower tax bracket in general.

Don't forget that the people who depend on you for half their support aren't always children. It's important to claim exemptions for any dependents that rely on you as well.

Now, don't think you can get away with claiming your ne'er-do-well brother if you're only giving him $50 every month and a place to crash once in a while. But if you do have a relative, say your cousin Larry, who makes less than $3,900 a year and depends on you for at least half his support, you can absolutely claim another $3,950 deduction for him. It doesn't matter if the person lives with you or not; Grandma can still meet the requirement if she's living in her own place but depending on you to help pay the rent.

You can even claim a non-relative as a dependent as long as that person lives with you full-time and meets all the other qualifications. And a lot of dependents might meet the requirement because they're depending on you to pay for what we'll discuss next: medical expenses.

If you're itemizing your deductions and not taking the standard amount, bear in mind that you'll be able to claim medical expenses that surpass 10 percent of your AGI. That can be a real boon to families who can write off a host of medical bills and associated costs for all the members of the household.

A surprising number of medical expenses qualify. Anything you're paying for to prevent, diagnose or treat a medical condition is fair game. (A nose job doesn't count unless there's an underlying medical reason, in other words.) Transportation costs incurred while getting treatment also count, as do prescription drugs. You can even count your employer-based insurance premiums as long as they're over that 10 percent minimum.

If you are self-employed, don't forget that you can write off the cost of medical premiums no matter what. Even if you take the standard deduction, you can just claim it in Form 1040 without having to itemize.

While it would be terrific if we could tell you to deduct private school tuition, the cost of school lunches and the price tag of that band uniform you've had to replace twice, deducting education expenses isn't quite so easy.

But there is a little hope. If any family members are in college, you can claim a deduction without having to itemize it. (That's extremely useful, because the deduction lowers your AGI; lowering your AGI means possibly sneaking into a lower tax bracket.) Depending on income or expenses, you can claim up to $4,000 a year on tuition or enrollment fees for a higher education program. Similarly, the American Opportunity Credit offers a $2,500 tax credit for all four years of college enrollment, dependent on income [source: IRS]. The Lifetime Learning Credit isn't restricted to four years and allows for a $2,000 credit per return.

So while the government is content to give out free public deductions for education, it's not shelling out for much else before college.

If you're itemizing your deductions, the goal is to get as many as you can to lower that tax bill (and make it worthwhile to bypass the standard deduction). Remember that your deductions have to reach 2 percent of your AGI before you can start writing off items, so the more you can net, the better. Charitable contributions are a terrific way to slowly tick up deductions.

Obviously, you'll want to keep track of any donations you make to nonprofits or charitable donations throughout the year. But keep in mind that it's not just cash donations; if your last garage sale wasn't as successful as you had hoped and involved several trips to Goodwill, you can absolutely write off the market value of the property you donated. (That barely used rowing machine might finally have proved itself useful.) Even the cost of transportation to charitable events is deductible, so if you're traveling all over the county to help pick up litter for an environmental group, keep track of your mileage.