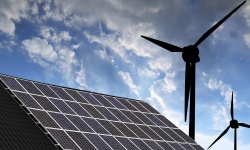 Buying turbines and solar panels for your U.S. abode? You could be in for one heck of a tax break.
vencavolrab/iStock/Thinkstock

Sorry, everybody, but we've got to start with a bummer of a warning: It used to be -- in the good old days of 2013 -- that we had a bigger list of energy-efficient deductions from which to choose. Install some insulation? There was a deduction for that. Own a hybrid? Write off some of that fuel-saving car on your taxes! Alas, over the past few years, several big energy credits have gone the way of the dodo.

But don't assume you've got nothing to gain from trying to go greener. While a few credits have expired, there are still some ways to reap tax benefits -- and yes, even credits -- on your current taxes. Let's start by examining a few of the systems you can install for a healthy tax break.

Let's jump right into some ways that your tax liability can benefit from energy upgrades. There are actually four different systems that will give you a tax credit, and the good news is very good: You can take the credit for each of them. That's right: 30 percent off the cost of each new or upgraded system. (And we'll see later how that deal is even sweeter, the more we dig into it.)

First up: geothermal heat pumps. Instead of using the air outside to heat or cool the house (and sometimes water), these little guys use the warmth of the earth to control temperatures in your residence. Many Energy Star qualified products are going to meet the requirements to get that sweet heat written off [source: Energy Star Tax].

Want to cut your hot water costs in half while saving big money on your tax return? Upgrading your home to a solar water heating system also gets that 30 percent credit for energy-efficient systems, and it has the much-needed bonus of cutting carbon dioxide emissions in half [source: Energy Star Money]. But don't let the sun get off with such light duties (har!). You can take a whole other credit for installing solar panels for electricity.

By putting in photovoltaic or solar panels on your property, you are free to take another 30 percent of the cost as a credit. They're used to provide electricity for the home, and -- like the other products -- they must be placed in service before 2016 for you to get the credit.

Who doesn't want to tilt at a windmill every once in a while? Keeps the imagination sharp, after all. But it's a lot more fun if you have a real one to spar with, so why not consider adding a wind turbine to the old homestead? You'll be rewarded handsomely in the form of yet another 30 percent credit of the cost.

Wind turbines are kind of used like solar electricity panels, in that they're converting energy to electricity. The small wind turbines you can install on your property use the wind's kinetic energy to produce electricity for your home. One thing to remember: It can't have a nameplate capacity (or maximum capacity) of more than 100 kilowatts to be considered a qualifying technology [source: Energy Star Wind].

Fuel cells, we'll see, qualify a little differently for energy efficiency deductions, but before we begin slashing our tax bills, let's have a word about how fuel cells work. Basically, these systems convert fuel into electricity using electrochemistry. (If you want to know a lot more about fuel cells, go for it.) So in this case, fuel cell technology is another way of getting more energy-efficient electricity into your home.

In the case of fuel cell systems, you can either take 30 percent of the cost (just like the other three) or calculate the kilowatt capacity for a credit. (You get $1,000 per kilowatt, as long as you have at least a 0.5-kilowatt capacity and at least 30 percent electricity-only generation [source: IRS 5695].) Unfortunately, the IRS will only let you take whichever option is the lesser amount.

One other difference between fuel cells and the other three types of energy systems: You're only going to be able to apply the tax credit to fuel cells if you're installing the system in your main home. The IRS considers your main home to be where you live most of the time -- no summer places or winter getaways.

But wind turbines, solar systems and geothermal heating? You can apply the credits whether you install them in your main home or your other fancy lodges (or tin shacks, for that matter). Do know that if you install fuel cells in a home you share with someone other than a married spouse, you will both have to calculate your individual credit, so long as you're both contributing to the cost of the system [source: IRS 5695]. 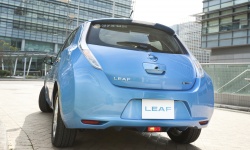 Hybrids like the Prius aren't going to do you any tax favors, but plug-ins like the Leaf may.
teddy leung/iStock Editorial/Thinkstock

There's another benefit to taking a credit on your energy efficiency upgrades. We're used to taking deductions or credits for the tangible items we buy. Say we are writing off a copier because we use it solely for work: We only deduct the cost of the machine. We can't deduct the cost of the labor and installation it takes to install it. (Listen, I don't know your copier situation. Wouldn't a professional have to install a real nice one?)

But with residential energy efficiency deductions? You don't just write off the cost of the system itself; you can also include the cost of labor and installation. Even hiring someone to wire or pipe the equipment to your home is part of the costs associated with the installation. (Just remember that the fuel cell credit might not be that whole 30 percent write-off if the kilowatt capacity is the smaller expense.)

It used to be that hybrid gas-electric vehicles earned you a tidy tax credit, but the credit soon expired after 60,000 qualifying cars were sold (the designated phase-out limit of the credit) [source: Motavalli]. But if you do buy a plug-in or all-electric vehicle, you're in the running for a huge credit.

Depending on your battery capacity, you can claim up to $7,500 for a tax credit if you've purchased a "qualified plug-in electric drive motor vehicle" (also known as an electric car). You can start with a $2,500 credit, but you can receive $417 in additional credit if your vehicle draws from a battery of at least 5 kilowatt-hours of capacity -- plus an additional $417 for each kilowatt-hour in excess of the five [source: IRS Plug-In]. Not sure if yours qualifies? Look at this handy chart the IRS has compiled for you to reference.

Like we said, several federal tax breaks have ended in the past few years. (One big one, the Nonbusiness Energy Property Credit, gave credits for energy-efficient windows, stoves and insulation, among other updates. It could only be claimed through 2013.) But if you're trying to save energy and go a little greener, you still might have some luck if your state offers tax rebate or credit programs.

Luckily, there are some really easy ways to do this. In fact, there's a whole government website devoted to helping you find breaks for your residence or business. With the Database of State Incentives for Renewables and Efficiency (DSIRE), you can simply look up your state to learn about any incentives available to you [source: DSIRE]. The Department of Energy also offers an easy look-up feature that allows you to search by type of system and eligibility status [source: DOE].

Here's one tip that's a pretty clever way to find yourself some energy-efficient tax breaks on your return. And -- give yourself a pat on the back -- it's also going to help the environment and possibly someone in need.

You probably know that if you itemize your deductions (instead of taking the standard deductions), you can receive a deduction for any charitable donations. But if you're donating an electronic item or recycling it for reuse, you also get to claim it as a charitable donation. While some people might be tempted to throw their broken or used cell phones in the trash, it's pretty terrible for the environment. By donating it to an organization that can recycle or reuse it, you can take that tax break and know that you're as green as can be.

1: Save Income, Save Money

So let's leave on a tip we can all take. While this isn't an across-the-board tax break or credit, it's worth pointing out that by saving energy, we're paying less money for it -- and that means more money in our pockets. Consider it like decreasing your tax withholding: Save a chunk on utilities or energy bills, and that take-home pay is yours to keep.

But how to start? It's actually pretty simple. Energy Star–qualified products and appliances are the first step to creating a more energy-efficient home. The government-backed label means that they're guaranteed to meet certain specifications, and you'll be able to save money and energy by installing them. Remember that if you are searching for the tax breaks we mentioned before, Energy Star–endorsed products are going to meet the specifications you need for a credit. So whether you're installing a fancy new energy-efficient system or just replacing an appliance, you're going to save yourself some income either way -- a boon, any time of year.