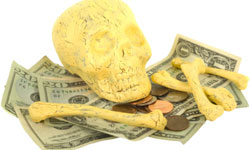 The death tax, a term used to refer to the estate and inheritance taxes, is not as scary as it may sound.
Hemera/Thinkstock

Is there any regulation that has a more sinister name than the death tax? What could possibly be worse than a tax on something that we can't control? The very name "death tax" conjures up images of grieving family members at the mercy of greedy tax collectors, heartless bureaucrats who line their pockets with the hard-earned wealth of the dead.

Thankfully, it's all a myth.

The term "death tax" is simply that: a term used to frighten taxpayers and motivate legislators to alter the tax laws. And while there are taxes that federal and state governments levy on the wealth that a person transfers to others upon death, the governments don't simply charge taxpayers for dying.

The taxes that most often fall under the death tax moniker can be complex and confusing, however. To separate fact from fiction, let's look at some of the most common myths about the taxes collectively referred to as the death tax.