5 Reasons to Carry Your Bank With You 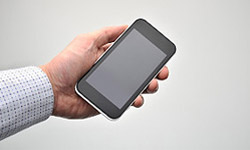 Your smartphone makes it possible for you to take your bank anywhere, but is it a good idea?
Yagi Studio/Getty Images

You'd need the strength of Atlas to carry your brick-and-mortar bank around, but thanks to mobile technology, you don't have to -- not literally, anyway. Your smartphone or tablet, enabled for mobile banking, now offers anywhere, anytime access to your checking and savings accounts.

Imagine being able to check your account balance while on the road, transfer money into a college student's account and keep track of your daughter's spending at the mall. It's possible -- and all you need is a smartphone (such as an iPhone, Android or BlackBerry) or tablet (such as iPad or Amazon Fire) and a secure link to your bank accounts through a mobile Web site, text banking or a phone app.

The number of people using mobile banking services is projected to climb from 12 million in 2009 to 45 million by 2014, according to research firm Frost & Sullivan [source: Bankrate.com] There's good reason for this: Since mobile banking requires a mobile connection rather than Internet access, you can get to your accounts wherever you want, whenever you want. Mobile banking can help you save time, increase productivity and even manage your finances more efficiently.

Read on to learn more sound reasons to carry your bank with you.

5: Avoid Making Trips to the Bank

Sometimes, you just can't get to the bank on time. What if you have to work late, or your branch is closed when you get there? Who wants to spend time on Saturday morning waiting in line for a teller? It can be a real challenge to match the operating hours at your corner brick-and-mortar bank with your busy schedule.

Mobile banking lets you bank anywhere, anytime from your tablet, mobile phone or PDA. Simply download an application for your device, and you can make deposits, transfer funds, check your balance and pay bills with the touch of a finger. The functionality may vary somewhat depending on your bank and your phone. Best of all, mobile banking is possible anywhere you have a mobile connection -- no traffic jams or waiting in line required.

4: Pay Bills Easily and on Time 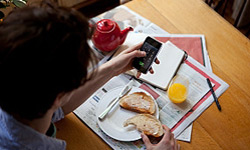 Could you imagine paying your bills over the phone at breakfast? Now, you can.
James Whitaker/Getty Images

Imagine being able to pay your bills while you're waiting to pick up your son from football practice, sitting through yet another flight delay or waiting for a friend at a coffee shop. Now you can get the tools to manage your finances in the palm of your hand.

Mobile banking through your bank's mobile Web site or app makes it possible. In order for this service to work, you'll have to set up online banking from your bank's Web site on your personal computer and enter information about your payees. Once that's done, you can pay bills on the go, helping you to manage that monthly chore efficiently and make any moment more productive. Plus, you'll save on stamps and paperwork, and never have to make up an excuse for missing a due date again.

Mobile banking gives you access to up-to-the-minute information on your account balances, so you can make sure your salary has been deposited before confirming your rent payment. You can check deposits, arrange money transfers, make deposits and monitor transaction history to manage your finances more proactively.

Keeping a watchful eye on your accounts can also help prevent identity fraud. You can sign up for text notification if certain activities occur, such as declined transactions, charges for gasoline, foreign transactions, cash withdrawals, online, phone or mail purchases, or purchases that exceed a predetermined amount. You can even sign up to receive alerts if your balance falls below a certain amount. These capabilities help you avoid fraud, as well as keep tabs on your personal spending as well as that of the people who share your accounts.

2: Save Money on Fees 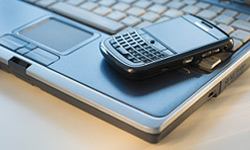 Some banks are making mobile banking services hard to resist by offering them free of charge.
Tom Grill/Getty Images

Banks are offering mobile banking services free of charge to their customers to encourage them to give this new service a try. That means you can save money and save time by taking mobile banking out for a test spin. Banks are willing to offer these services for free because they can reduce administrative costs when customers can conduct their business electronically.

One word of caution: If you're using a smartphone, check with your service provider to make sure that your data plan doesn't tack on extra charges for text messages or downloads. If you don't have the right service, the charges can add up quickly; a little advance planning can help you avoid any unpleasant -- and expensive -- surprises.

Even though more people are using their smartphones and tablets with myriad communications and lifestyle applications, many are still reluctant to adopt mobile banking.

One of the reasons is concern about security. According to a study by Javelin Strategy & Research, there was a 60 percent increase in the number of smartphone users between 2009 and 2010; from 2010 through March 2011, the number of smartphone users increased again by 43 percent. During the same time period, however, there was no change in mobile banking usage. In fact, in 2009, 26 percent of smartphone owners were uncomfortable using their phone for banking; a year later that number jumped to 40 percent [source: Waters]. As of September 2010, more than half of all cell phone users see mobile banking as unsafe [source: Clairmail].

However, with a little common sense and caution, mobile banking is safe and secure. Simply use the same precautions and awareness of security that you would on a computer. Don't open unknown e-mail links or go to unfamiliar Web sites. Make sure you install antivirus software and use the app that's right for your phone type and your bank. It's also smart not to send online banking credentials using em-ail or text. Avoid using public WiFi access to conduct personal banking business or sales transactions.

Bank experts say that security isn't a problem because bank data is guarded with passwords and other identification requirements. Plus, if you lose your phone or tablet, it can be disabled, so no one can access your information.

As mobile banking grows in popularity and more financial institutions offer the service, expect its functionality to increase. A few banks have actually made it possible to make mobile deposits; as mobile banking becomes more mainstream, expect this technology to become a lot more user-friendly in the future. 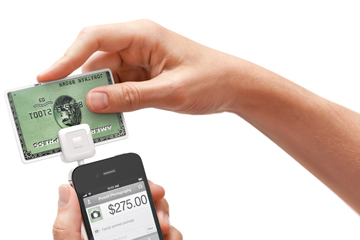 Is this the payment method of the future? No cash, no credit card, just your smartphone and your finger? Find out how Square works at HowStuffWorks.