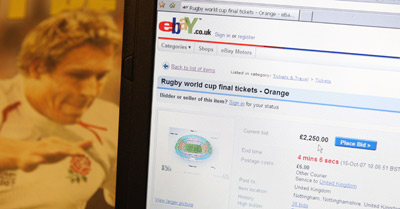 Buying and then immediately reselling sports tickets on eBay and other auction sites can mean a quick profit for agile arbitrageurs.
Peter Macdiarmad/Getty Images

Did you ever buy something and then turn around and sell it right away to a predetermined buyer for a higher price? If so, you were engaging in a simple form of arbitrage -- a no-risk financial transaction that creates a profit. You were an arbitrageur -- a person who engages in arbitrage -- or a trader, for short.

Like a chameleon, this type of commerce takes on different appearances, from the street vendor to the corporate mogul. In a 1980s movie based on arbitrage, the main character's name may remind you of a lizard-like creature. Find out which flick this is and learn about the different types of arbitrage on the next page.

Simple arbitrage is quite common in sports betting. In this type of arbitrage, bettors seek out bookmakers (bookies) who give different odds on the same sporting event. For example, Bookmaker A might give even odds on a basketball game between the Bulls and the Celtics. Bookmaker B gives 2-1 odds that the Bulls win. To exploit the difference in the odds given by the bookies, a person could bet with both of them and make a profit regardless of which team wins the game. 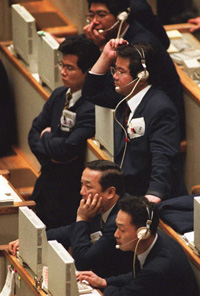 Traders react to a sell-off on the Tokyo Stock Exchange. Shares plunged partly because of arbitrage selling.
TOSHIFUMI KITAMURA/AFP/Getty Images

In the world financial community, arbitrage refers to two basic types of activities. One requires little or no risk on the part of the investor, and the other can be highly speculative.

In its purest form, arbitrage contains no element of risk. True arbitrage is a trading strategy that requires no investment of capital, can't lose money, and the odds favor it making money. Any transaction or portfolio that's risk-free and makes a profit is also considered arbitrage [source: Riskglossary].

But pure arbitrage actually quite rare. Why? Financial markets are set up in a way that discourages arbitrage from happening in the first place. Markets are designed so that securities are priced equally within all trading markets. They're said to be arbitrage-free.

Occasionally, minor price differences occur on financial markets. These price differences, called mispricings, mean that there's a temporary discrepancy between a stock's intrinsic value and its market value. A quick-moving trader can take advantage of such opportunities and make a profit. For example, a share of Microsoft may sell for $28.00 in the U.S. market and sell for $27.98 on one of the European exchanges. Such a difference may exist for a short time because exchange rates haven't been applied yet. If a trader makes a trade before the price is adjusted, he or she can make a profit of two cents per share. If enough shares are involved, this profit can be considerable.

If you watch the financial television channels such as CNBC and Fox Business News, or read financial blogs, newspapers or magazines, you'll hear a lot about arbitrage. Most of the time, however, the discussion won't revolve around true arbitrage. It'll revolve around speculative arbitrage -- which involves speculative trading strategies -- and transactions by hedge funds, the often mysterious and much-maligned investment partnerships between well-to-do investors.

To learn more about arbitrage, trading and related topics, follow the links on the next page.

Gordon Gekko, the character played by Michael Douglas in the movie Wall Street, was partially based on Ivan "The Terrible" Boesky, who was convicted of insider trading in 1986. Before his arrest, Boesky used insider information of a different sort: He cooperated with federal agents and worked undercover to help the government gather information on other Wall Street rulebreakers [source: Riskglossary, Cramer].

What are the different types of businesses?
What is royalty income and how is it taxed?
What are some common vehicle tax deductions?