Will bankruptcy affect my student loans? 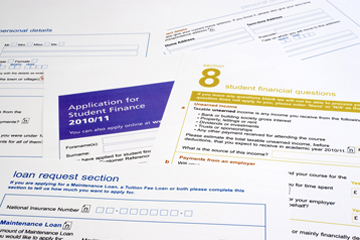 Bankruptcy usually doesn't affect your student loans, but that does not hold true in all cases.
Ian Jeffery/Getty Images

Your love of Romance languages -- Spanish, Portuguese, French, Italian and Romanian -- knows no bounds. So much so that, instead of seeking employment after earning a bachelor's degree, you decided to enter grad school. Now, with those heady years of academe behind you, life is a harsh reality filled with unanswered resumes and desperate attempts at temporary employment. You're still waiting for your ship to come in, perhaps in the form of a professorship at a major university. Meanwhile, unpaid bills are piling up and you spend most of your days avoiding calls from collection agencies. With your financial situation sinking fast, bankruptcy seems like the only viable life preserver.

In fact, an article published in a 2012 issue of American Bankruptcy Law revealed a surprisingly high percentage -- as high as 40 percent -- of bankruptcy filers with student loan debt successfully lobbied to have the debt canceled. The article also reported that the number of those who seek forgiveness of student loans is staggeringly low; as few as .1 percent of student loan holders who filed for bankruptcy actually asked for the loans to be discharged [source: Iuliano].

In short, debtors must be broke and able to show that they'll remain that way for a long time. So long as there's little hope they'll be able to repay the loans. Even if the full amount of student loan isn't discharged, there have been cases in which a portion of the loan or the interest owed on the loan has been canceled. Without a discharge, you'll still need to repay your student loans [source: Clark].

A bankruptcy should have little effect on your future applications for student loans, but your credit history will. For anyone who has filed for bankruptcy, regardless of whether student loans are discharged, rebuilding good credit is an important determination for future student loans. If you are required to repay your student loans after bankruptcy, you'll want to keep them in good standing. If your student loan goes into default because you didn't make payments, it will be difficult to receive federal student aid [source: FinAid].

How Tax Credits Work
How much does it cost to raise a child?
10 Tax Tips for the Recently Divorced