Where did the idea for bankruptcy come from? 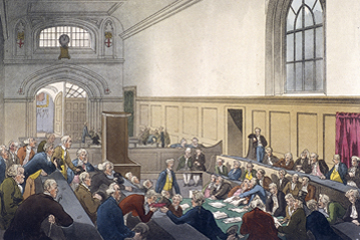 Examination of a bankrupt man before his creditors in the Court of King's Bench, Guildhall, London, 1808.
Guildhall Library & Art Gallery/Heritage Images/Getty Images

Imagine falling behind on your credit card payments and, eventually, becoming unable to pay them at all. Now imagine being thrown into prison because of it.

It may seem an unlikely scenario today, but there was a time in history when debtors were jailed for failure to pay -- a sentence that made little sense since being imprisoned left them unable to work. Even in the U.S., debtors were jailed until the early 1800s. Now our legal system deals with the inability to pay using a complex federal bankruptcy code designed to offer protections to debtors, and, in some measure, to creditors. But how did the bankruptcy code come about?

Bankruptcy laws are designed to liquidate the collective assets -- known as the estate -- of a debtor, and to dole out the proceeds to creditors. The creditors receive a portion of the proceeds according to claims they have filed with the bankruptcy court, which help satisfy what the debtor owes them. If the debtor owes more than the estate pays the creditor, as is often the case, then the balance of the debt is forgiven.

It's a concept that's been in play since the ancient Roman Empire, when creditors could have a debtor's estate sold to receive the proceeds. Bankruptcy proceedings were commonplace during the Middle Ages, and also included a selling of assets to relieve debts. The U.S. took its cues from England, modeling the largely unpopular Bankruptcy Act of 1800 -- adopted 11 years after the Constitution was ratified -- after the motherland's laws that provided protection to merchants, bankers and the like when bankruptcy charges were brought against them [source: Encyclopedia Britannica].

President Carter signed the Bankruptcy Reform Act, the basis of modern bankruptcy, into law on Nov. 6, 1978. Known as the Bankruptcy Code, it created bankruptcy courts and, notably, no longer allowed student loans to be discharged [source: Federal Judicial Center]. The next major change came in 2005, with the Bankruptcy Abuse Prevention and Consumer Protection Act (BAPCPA). Essentially, the act made it harder to file for bankruptcy by increasing the complexity of the law, as well as the fees and amount of paperwork required when filing. It made it more difficult to have debts wiped clean and to file for bankruptcy more than once. It also requires bankruptcy filers to take a credit-counseling course -- which is far more palatable than a debtor's prison [source: Hahn].

Can you get tax deductions if you own a rental property?
How the FAFSA Works
How to Decorate Your House for the Holidays on a Budget