What was the world’s largest bankruptcy filing? 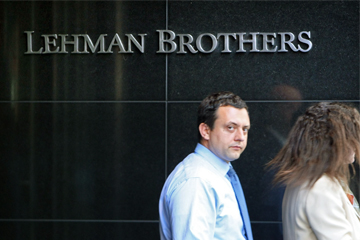 The 2008 economic downturn resulted in global firm Lehman Brothers walking away from more than $600 billion in debt.
Mario Tama/Getty

Detroit was a 20th-century boomtown. Dotted with manufacturing plants rolling out new automobiles at an economically healthy clip, and home to a steadily rising and largely affluent population — 1.8 million by the 1950s — the city was a showpiece of ingenuity and elbow grease.

Shortly after the turn of the 21st century, however, the automobile industry bubble burst and The Great Recession held the pin. The "big three" auto companies — Ford, General Motors and Chrysler— collapsed under waning demand, labor woes and rising debt. The city's economy gave way, and public debt became unmanageable. On July 18, 2013, Detroit became the largest city in the history of the United States to declare bankruptcy, with $18 billion of debt [source: Padnani].

Detroit isn't alone. Between 2008 and 2013, a dozen other municipalities filed for bankruptcy. Entire countries have faced insolvency because of mounting debt that outpaced their gross national product. It happened to Argentina in 2001, and in the late 2000s Greece courted financial disaster for several volatile months [source: PBS, NPR].

The dubious honor of filing the world's largest bankruptcy doesn't go to a country, but to a former U.S. company known as Lehman Brothers. This global firm made a name for itself in banking and trading, beginning as a general store opened by a German immigrant in Montgomery, Alabama, in the 1840s. The company turned its attention to financial services, and in the ensuring decades, weathered the Great Depression, two World Wars, buyouts, spin-offs, and a host of global financial crises. In the early 2000s, the company expanded through the acquisition of five mortgage lenders and by 2007, its stock had climbed to a record $86.18 per share, bolstered by years of rising revenue riding a boom in the U.S. housing market.

By 2008, however, a national credit crisis was brewing; the housing bubble had burst and subprime lenders, like those Lehman Brothers now owned, were at the center of the downslide. The company began hemorrhaging. The first week of September 2008, for example, saw Lehman Brothers stock take a 77 percent dive. The bleeding continued until, in just one fortnight, the company was beyond resuscitation. On September 15, Lehman Brothers declared bankruptcy. The move resulted in the world's largest bankruptcy filing, with Lehman Brothers walking away from more than $600 billion in debt.

With additional companies joining the ranks of the "restructured" every year, few industries — or even cities — seem immune to financial woes these days [source: Investopedia].