Browse the article How do I know if I have too much student debt? 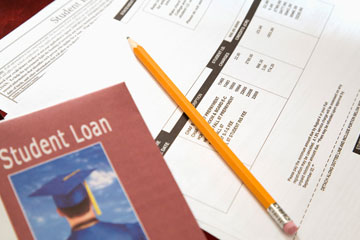 Student loans can help you pay your way through college -- and keep paying for the next several decades.
© 2009 Jupiterimages Corporation

Financial debt is a pretty relative state. If we look, for example, at the U.S. government debt of $1.8 trillion in mid-2008, the average student-loan debt of $23,000 is chump change [sources: Ohlemacher, Chaker].

Of course, the U.S. government pulled in $2.7 trillion that year, while eight out of 10 college students graduate without having secured a job [sources: GAO, Clark]. No money coming in is a drag on the loan-repayment schedule.

The fact is, most financial aid comes with strings. Only scholarships, some grants and institutional tuition discounts are free money; federal and private loans require payback, with interest. So while many students breathe a sigh of relief when they obtain financial help to cover the skyrocketing cost of a four-year degree, that relief ends quickly after graduation, when it's time to pay back that help.

Certainly many students are equipped to cover their payments, but these financially secure borrowers are a dwindling population. Meanwhile, the number of borrowers and their loan amounts is increasing. In the mid-'90s, 58 percent of college students took out loans, ending up with an average debt of about $14,000; fast-forward to 2009, and 66 percent of students are carrying an average $23,000 in debt when they graduate [source: Chaker].

Most of those students don't have jobs lined up. Many of those who do will be pulling in less than they'd expected and not enough to comfortably cover their payment schedule. Or cover it at all.

Student loans aren't a bad thing, though, by any stretch of the imagination. Without them, most people couldn't afford a higher education. The trick is determining the line between helpful loan and unmanageable debt. In this article, we'll find out where that line is and look at some programs available to help graduates who find themselves in over their heads.

As with most things, maintaining the positive nature of financial aid is all about moderation. Over-borrowing is typically how things turn ugly.

Too Much of a Good Thing 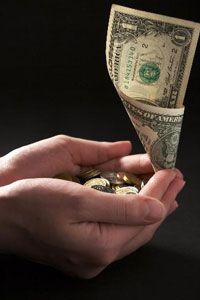 Try to only borrow what you absolutely have to.
Photo courtesy New Mexico Attorney General

With a four-year degree running up to $200,000 these days, it's no wonder why two-thirds of all college students seek some sort of financial assistance [source: Weiss].

The level of assistance varies. Some only borrow a few thousand. Others take out loans for much, much more. In 2008, 25 percent of graduates finished school with more than $30,000 to repay, and one in 10 owed more than $44,000 [source: FinAid]. (Graduate students typically finish school even deeper in the red, with up to $120,000 to pay back [source: FinAid].) How dire those debt straits really are depends on what happens after graduation. With a high-paying job, repayment can be a breeze. Engineers or investment bankers may find they have no problem at all paying off their student loans. Teachers, social workers and philosophers, on the other hand, may be in trouble.

Repayment typically begins within six months after graduation, most often in monthly installments. It'll only cost $12 a month to borrow $1,000 -- but most students borrow more than that. For a $23,000 loan, the most allowed in federal student aid, the monthly payment is in the area of $275 a month for 10 years, assuming 8 percent interest (the rate as of 2009) [source: Weston]. That can get a little heavy if someone is graduating without a job lined up or is only looking at a starting salary of $26,000, which is typical for students graduating with a psychology degree [source: Weston]. Two-thousand a month doesn't stretch that far after taxes, housing, food, electricity and the cell phone bill. If that psychology major took out private loans on top of the federal aid, the situation is even bleaker. Fifty-thousand dollars in student loans works out to more than $600 a month [source: CCIS].

For graduates who simply can't pay, deferments are a possibility. But that may just be putting off the inevitable (plus accrued interest, if that's in the loan terms). Total cancellation of the debt is also a possibility, albeit a distant one. In both cases, it's necessary to prove true financial hardship, and that's not always an easy standard to achieve. Defaulting is another option -- an extremely undesirable one that can affect credit rating and result in garnished wages and confiscated tax refunds.

As a result, many graduates find themselves in the awkward position of having to put off other financial goals in the interest of getting out of debt. A 2006 survey of more than 1,500 graduates under age 35 revealed that nearly half put off buying a home, and more than a quarter delayed starting a family, due to student debt [source: Chaker]. Saving for retirement typically gets pushed back at least 10 years, the average time it takes to pay of student loans under good financial circumstances [source: Weston].

In the end, it pays to play it safe from the very beginning by calculating a manageable loan amount before applying for help. 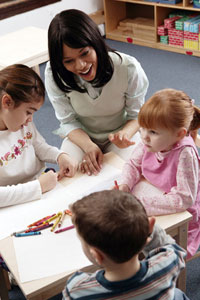 Consider your expected income upon graduation. A first-year K-12 teacher can hope to bring in about $30,000.
© 2009 Jupiterimages Corporation

While it's tempting to borrow as much as you can to pay for school, that's not always the smartest path. It's actually seldom the smartest path, since private loans can subsidize federal aid to astronomical, higher-interest levels that can leave you paying off student loans for the rest of your life.

Job one, then, is to avoid private loans if you can realistically squeak by on federal loans and grants, which often have lower interest rates. Job two is to figure out how much you can afford to borrow from the government.

In general, if you're going to have to put more than 10 percent of your pretax, post-graduation income toward loan repayment, you've borrowed too much [source: Clark]. To decide how much you can safely borrow for school, start by considering these factors:

First, how much will you be making after you graduate? It's not always easy to predict this, but you can usually at least get a ballpark estimate through industry standards and online salary calculators. According to the Web site PayScale, a first-year K-12 teacher can expect about $30,000 per year; a starting civil engineer can look forward to about $50,000; and an information-technology specialist might begin around $40,000. Then compare your projected salary to expert loan guidelines. Columbia College, for instance, recommends no more than $25,000 in loans for someone making $36,720 to $45,900 a year, and up to $50,000 for those earning $73,440 to $91,800 [source: CCIS].

Web sites like Mapping Your Future and FinAid offer simple online calculators to help you decide what size loan you can handle.

Any potential borrower should also consider what other financial needs will need to be met in post-graduation life. If he or she can count on special circumstances like caring for a sick parent, supporting a child or having to pay off other debts besides the student loans, the reasonable amount to borrow might decrease.

For those who can't afford to take out enough loan money to cover the schooling they can't afford, there are some other options. Free money in the form of scholarships or grants are available for those who qualify and can beat out other candidates scholastically, athletically or in some other talent area; and part-time school combined with a part-time job can be a good option for those who have the time to extend their quest for a degree.

If worst comes to worst and the monthly payment is simply beyond your means, there are programs that can help. See "Solutions for Borrowers Who are Having Trouble Repaying Education Loans" on the FinAid Web site to learn more.

For more information on student debt and related topics, look over the links on the next page.