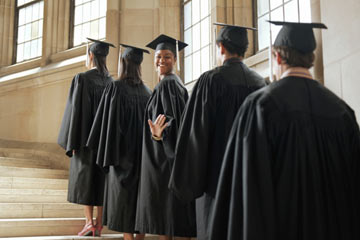 Will IBR prevent you from stepping up to a lifetime of student debt?
Ryan McVay/Lifesize/Thinkstock

Income-based repayment, or IBR, is an alternative method for paying back student loans that caps monthly payments at 15 percent of discretionary income. IBR is designed to relieve the crippling economic burden of student loan debt for millions of American households. The program was created by the College Cost Reduction and Access Act signed by President George W. Bush in 2007, but didn't go into effect until 2009. In 2011, President Barack Obama lowered the monthly payment cap to 10 percent for new borrowers [source: Liberto].

After all, the numbers are clear: Workers with college degrees make more than those with only high-school diplomas. According to a 2010 study by the National Center for Education Statistics, workers ages 25 to 34 with college degrees made 50 percent more on average than people of the same age with only a high-school diploma [source: NCES]. Because of those numbers, most student borrowers count on getting a well-paying job that will easily cover the monthly loan payments.

But what happens if the job market dries up, as it has during the recession? Unfortunately for millions of recent college graduates, there aren't enough well-paying jobs to go around. In fact, 37.8 percent of recent college graduates are working jobs that don't even require a degree [source: Cohn]. The result is lower overall wages and higher default rates on student loans.

Of the 37 million Americans who carry outstanding student loan debt, 14.4 percent are in default, meaning 5.4 million borrowers are behind on at least one student loan payment [source: Federal Reserve Bank of New York]. That's the highest default rate in 14 years.

Under the standard payment plan for federal student loans, borrowers repay their debt at a low fixed interest rate over 10 years. Monthly payments are amortized to pay back both interest and principle by the end of those 10 years. A borrower with $50,000 and a 4 percent interest rate would pay over $500 a month, a huge sum if the best job you can find pays $12 an hour.

With income-based repayment, monthly payments are reduced according to your income and the size your household, and loan terms are stretched to 25 years. Any remaining debt after those 25 years can be canceled. The goal is to save the credit ratings of millions of borrowers by making their student loans more affordable.

On the next page, we'll explain the eligibility criteria for IBR and how to sign up for the alternative payment plan.