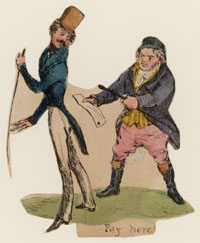 If you've never fallen behind on monthly payments for loans or credit purchases, the term "debt collector" may evoke such imagery as the mustached villains of old melodramas who demanded the surrender of dwelling or decency from innocent heroines. Or you may think of Dickensian landlords who thrived in the times when poverty was considered a crime. But for the millions of Americans who have endured the stress and hardship of delinquent bills, the debt collector is an intimidating reality.

American consumer debt continues to grow at a staggering rate. In 2007, national consumer debt totaled more than $2.5 trillion dollars, an average of almost $8,200 for every U.S. citizen [source: Money-Zine]. According to Robert C. Hobbs, deputy director of Boston's National Consumer Law Center, the overwhelming rise in debt can be attributed to such factors as stagnant personal incomes, rising interest rates, identity theft, Internet fraud and the restrictions imposed by bankruptcy-protection laws passed in 2005 [source: Chan].

A positive sign that can be inferred from such statistics is that debtors (or their attorneys) are becoming increasingly familiar with their rights. An increased number of complaints suggests that consumers are aware of the legal guidelines of the Fair Debt Collection Practices Act (FDCPA), which limits the tactics that debt collectors may employ. (You can see a copy of the act at the Federal Trade Commission Web site.)

The FDCPA was prepared by the Federal Trade Commission and enacted in 1977. It covers virtually all personal debts -- including credit purchases, mortgages and medical expenses. Unscrupulous debt collectors may be on the rise, but the FDCPA is the debtor's most powerful safeguard against them.

So what does the FDCPA allow -- and not allow? Find out on the next page.