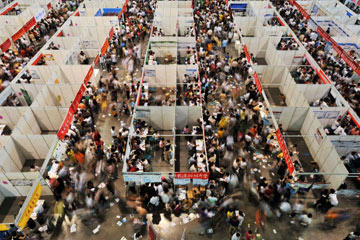 If you've ever attended a college fair, you've encountered rows of booths set up and staffed by friendly people who can rattle off loads of information about the college they represent. Chances are that some of these people were college admissions officers. While large institutions generally maintain a separate staff of recruiters, some -- smaller colleges especially -- have made student recruitment part of the admissions officers' job description.

Admissions officers are often assigned to a particular school within a college, like the medical or business school. This helps cut down on recruitment quotas. It also allows the officer to become a walking encyclopedia of knowledge about the particular tranche of the college they represent. A potential student who can't stand math and had a high verbal SAT score probably wouldn't fit in at the engineering school, for example.

An admissions counselor also should keep abreast of the school's financial aid status. Identifying and assisting a student who fulfills the school's aid requirements can lead to securing a student who may not have otherwise have attended college -- and another addition to the counselor's quota. Part of admissions is advising students and their parents on financial aid and managing the large amount of paperwork associated with financial aid requests. Scholarship expertise is also a key skill for admissions officers.

College officers also play an instrumental role in creating policy that will help get the right students into the right school at their college. A better fit between a student and a program course generally leads to a higher graduation rate. This, in turn, leads to a better public image for the school, as most people intuitively associate high graduation rates with a good school [source: Gold and Albert].