Are layaway plans or credit cards better for saving money? 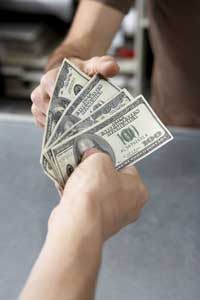 It's all about the benjamins if you want to save during the holidays. People who pay with credit cards tend to spend up to a third more than when paying with cash. Get more tips in the debt image gallery.
Smith Collection/Getty Images

­The holiday season often leaves people a little rosier, plumper and, unfortunately, poorer. The average American will spend $832.36 on holiday shopping in 2008, and the bulk of that tab can piggyback on your finances into the next year. Shelling out nearly a grand for an assortment of sweaters, DVDs and animatronic dolls for friends and family leaves many starting January in economic doldrums. No wonder getting out of debt is one of the most common New Year's resolutions.

That steep sum for holiday expenses is actually a reflection of scaling back rather than indulging. The National Retail Federation's annual survey found that consumers have their eyes peeled for bargains during the holidays. The Federal Trade Commission also recommends that budget-conscious shoppers stick to lists, seek out sales and stay focused to avoid breaking the bank. How you pay for the items on that list can also trim down the spending.

For starters, ditch the plastic. In 2006, Americans charged an estimated $135 billion to credit cards during the holidays, with individuals putting more than $600 on their cards [source: Lim]. Carrying cash could reduce that figure. Compared to paying with cash, you're prone to spend up to a third more with credit cards [source: Lim]. Studies have found that credit cards boost people's "willingness to pay" for pricey items [source: Prelec and Simester]. Handing over cash, on the other hand, reins in your urge to splurge because it's a more tangible experience -- you can see and feel your money being spent [source: LiveScience].

­Cash isn't always a viable option, especially in an aching economy. You may want to buy a child a new 10-speed bicycle, but you don't have the $200 for it in your wallet. To relieve cash-strapped consumers, several chain stores have brought back a blast from the past for the 2008 holiday season. Little Johnny wants that bike, but you don't have the money? Put it on layaway.