Kids & Cell Phones: How to Decide What They Need 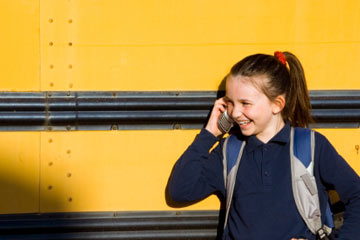 Kid's who don't have cell phones are quickly becoming the minority.
©iStockphoto.com/Blue_Cutler

You may be waiting as long as possible to get your kid a cell phone for a variety of reasons. Some parents' worries include kids using their phones for bullying, cheating on tests and sending sexual photos and messages. Others worry about a potential link between cell phone usage and brain cancer, although the American Cancer Society and the U.S. Food and Drug Administration (FDA) contend there's not enough evidence to make this claim.

Despite these concerns, kids who don't have cell phones are quickly becoming the minority. Today, about 75 percent of kids ages 12 to 17 have a cell phone, according to the Pew Internet & American Life Project. In 2004, less than half in that age group did.

If you're finally ready to break down and get your child a phone, you'll of course want to start out with a little lesson in cell phone etiquette and lay down some ground rules, including who he or she can call and when. But choosing just the right cell phone and cell phone plan for your kid -- out of the myriad options available -- can also help you enforce those boundaries and keep your child safe. Read on to find out how to do that.