Does elementary school math affect how much money you'll make? 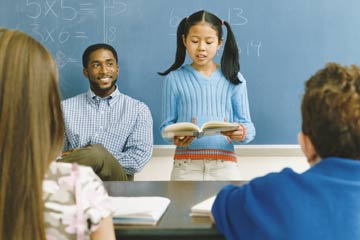 The year is 1958, and two boys are born on the very same day into very different circumstances. One boy is raised by humble farmers in rural Scotland. Neither of his parents went to college, and the boy attends the local public school. The second boy grows up in a Georgian mansion in London, raised by Oxford-educated parents and enrolled in the best private schools.

What does the future hold for these boys? Is one fated for success and the other for mediocrity? And what might math skills have to do with it?

These hypothetical boys are representatives of a real study of more than 17,000 children born during the same week in 1958 in England, Scotland and Wales (as well as 920 immigrant babies born that week). For more than 50 years, the U.K.'s Economic and Social Data Service has tracked the progress of these individuals from birth through school and well into their careers through the National Child Development Study.

In 2012, two researchers at the University of Edinburgh, Scotland, analyzed the reams of data from this 50-year study to determine which variables of early life are the clearest indicators of future success. Is your adult socioeconomic status largely determined by the wealth of your parents? Is innate intelligence the best predictor of success in school? Do people who stay in school longer earn better salaries?

Specifically, the Edinburgh researchers wanted to measure the strength of the relationship between early childhood academic performance and adult socioeconomic status. Their hypothesis, based on previous studies, was that childhood math and reading skills are indicators of later academic achievement.Greater academic achievement leads to more marketable skills; and better skills leads to a well-paying job, a nicer house and other worldly signs of success. Numeracy, in particular, has been associated with better decision-making in a person's finances.

The researchers, Stuart Ritchie and Timothy Bates, published their findings in the May 2013 edition of Psychological Science, and their conclusions were surprising. Whether you are born rich or poor, and regardless of your overall IQ, your math and reading level at 7 years old is a reliable predictor of future success. 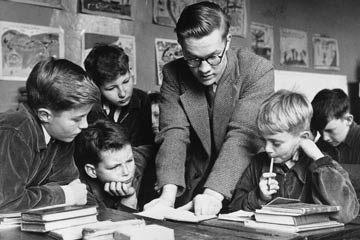 A teacher at work with a group at a school for orphans in London in 1958, around the time the National Child Development Study was started in the U.K.
Central Press/Getty Images

The authors of the Psychological Science paper aren't the first researchers to study childhood factors that lead to financial success or failure in adulthood. There is a similar study showing that parental education level during middle childhood is an excellent indicator of future success [source: Dubow et al.]. Another study says that while your parent's socioeconomic status might help you land your first job, the salary you earn over the course of your career depends more on your overall intelligence [source: Ganzach].

What is unique about Ritchie and Bates' research is that they were able to isolate two seemingly secondary factors — reading level and math performance at 7 years old — and show how these numbers could predict adult success, independent of every other variable.

How clear was the connection between first-grade academics and adult socioeconomic status? Of the 18,000 people in the U.K. study, those who scored in the third quintile (40th to 60th percentile) on math and reading when they were 7 years old attained the exact average socioeconomic status at age 42 [source: Ritchie and Bates]. (Socioeconomic status is scored using a formula that includes gross income, as well as the "class" of occupation and housing.)

For the kids who scored in the top 20 percent in math and reading, the result was adult achievement several notches above their peers. According to the data, an increase of one reading level in the first grade — as indicated by standardized test scores and teacher feedback — translated into income gains of $7,750 at age 42 [source: Mikulak].

In an e-mail from Stuart Ritchie, co-author of the Psychological Science paper, the researcher clarified that childhood reading and math performance were only two of several strong indicators of adult success. The child's original socioeconomic status, intelligence level at age 11, academic motivation at age 16 and total years of education each rate statistically higher than math and reading as predictors of future success.

But the important message of their research is that when all of those other variables are factored out, a child's ability to read and do math at 7 years old still makes a statistically significant difference in the kind of job he or she will work as an adult, and the kind of money he or she will earn.

The next question is, what are the factors that influence childhood reading and math skills, and what is the take-home message for parents and educators?

The Message for Parents and Educators

If the research proves that 7-year-olds who can read well and do simple math become adults with better jobs and bigger homes, then what is the message for parents and educators? What makes some kids better readers and mathematicians than their peers?

One possible answer is that they were simply born that way. Genetics plays a significant role in determining academic achievements. That's why Ritchie and Bates, the authors of the Psychological Science paper, are conducting a follow-up study of identical twins. By comparing the academic success of two people with the same DNA, the researchers can isolate the impact of nature versus nurture [source: Mikulak].

Family income level is another big factor. According to data from the 18,000-person U.K. survey, there is a significant correlation between a child's socioeconomic status at birth and his or her math and reading skills at age 7. Makes sense that families with more money might send their children to better schools or be able to hire tutors to improve skills.

For educators, Ritchie and Bates' findings support the idea of strong common standards across private and public schools. With this data in hand, educators can see the long-term positive effects when even the youngest kids are taught to read and do math at a high level.

Research has debunked the myth that some people are just "born with it," whether "it" is a talent for computer science, basketball, writing poetry or any other skill. The real "it" factor, it turns out, is good old hard work. People with the grit to keep practicing and honing their talent, even when it's boring or painful, are the ones who succeed [source: Wired].

I want to thank Stuart Ritchie at the University of Edinburgh for taking time to answer my questions and clarify his findings. At first, I didn't understand the big deal about his and Timothy Bates' conclusion that early childhood academic achievement pointed to financial success later in life. It seemed pretty obvious, right? If a kid comes from an advantaged background — educated parents, a safe and stimulating home environment — he or she is more likely to do better in school, get into a better college, get a better job and earn a better salary. But Ritchie made it clear that the correlation between first-grade reading and math skills and later success was wholly independent of things like parent education level or even the kid's IQ. The surprising message is you don't have to be born rich or hyper intelligent to achieve a high socioeconomic standing. If you master the basics at an early age, you will be on track to succeed in school and in your career. That gives me hope as a parent, and reason enough to get out those multiplication table flash cards.