Should you use a coupon clipping service? 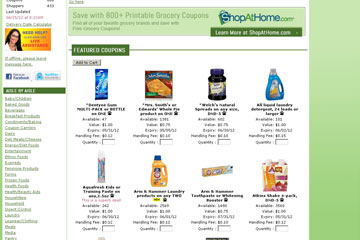 It's true that clicking for coupons is a lot easier than clipping them, but coupon services aren't for minor leaguers.
Photo courtesy of TheCouponClippers.com

There aren't too many people out there who don't like to save money at the supermarket. For most of us, though, it's a pretty casual thing -- we'll keep an eye out for sales or jump on a two-for-one deal if we see it, but we're not spending our free time thinking about it. Unless your name is Paris Hilton, you've probably clipped a few coupons in your day, but there might not be too much effort beyond that.

People who are really serious about saving money, however, stockpile coupons like it's their job. And couponing can practically become a part-time job -- it takes a lot of time, organization and dedication to regularly save 80 percent at the grocery store. Extreme couponers are constantly on the alert: They research, swap, wheel, deal, trade -- and they join coupon-clipping services.

If you're a casual couponer who happens to stumble across a clipping-service Web site, you might be tempted to check it out. Some services offer millions of coupons -- many more, obviously, than you could find in your local Sunday paper -- and they're already categorized and organized. And the coupons are free on most sites. You're basically paying for someone's time for finding, clipping and collecting coupons, so you'll pay a few dollars in shipping costs to have all the coupons you want mailed directly to your door. Easy, right?

On the surface, yes -- clicking for coupons is a lot easier than clipping them. But coupon services aren't for minor-leaguers. Sure, you could buy hundreds of coupons in a matter of minutes, but if you don't know exactly when, how and where to use every single one, you'd just waste them. Most services have a minimum order per coupon, so you really need a game plan to make it worth your while.

In the end, you have to be just about as coupon-obsessed to use a clipping service as you do to clip them yourself. You also need to do your research on the services themselves -- which one is the best deal? But if you've already developed good couponing habits, a service will save you a ton of time and probably a decent amount of money.

On the next page, you'll find lots more information about couponing.