by Marianne Spoon
Prev NEXT
1 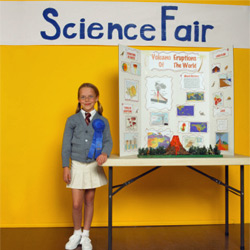 That's going to be your kid up there with the ribbon, and you won't have to spend a fortune either if you follow the tips we just outlined.
Brand X Pictures/Thinkstock

Award-winning science fair projects don't have to focus on hard science or gadgets. Observing people and animals can be just as interesting -- and cheap.

Students can study the behavior of classmates or adults. In fact, a project that did well at the largest high school science competition, the Intel International Science and Engineering Fair, focused on how people perceive awards [source: National Institute on Drug Abuse]. Most of the student's data was probably inexpensive to gather because she conducted surveys and interviewed participants herself. Similar projects may call for outlining an experiment on a consent form and having participants sign and agree to partake. What's costly, however, is the time and effort budding scientists should set aside for these types of projects. Poor time management often stands in the way of kids putting forth their best work [source: Glidden].

In the same spirit, students may choose to study insects' behaviors at different times of the day in their backyards or record their reactions in controlled experiments to stimuli such as food and habitat changes with the guidance of a teacher. Students could even look at their classmates' eating habits in the lunchroom to track relationships between food choices and exams or the weather. Memory experiments are feasible and require few materials as well.