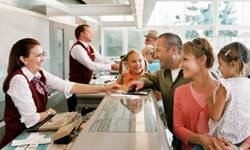 Family travel should be a fun time!
Digital Vision/Thinkstock

Families on the move need reliable transportation, and nothing beats flying for convenience. If you've ever spent eight hours (or more) traveling with a couple of unruly kids in a car and rocking to the endless beat of: "Are we there yet? Are we there yet? Are we there yet? I have to pee!" then you know that some conveniences are worth the price. There are tradeoffs to flying over driving, though. The friendly skies aren't quite as friendly as they used to be. Flying can take a big bite out of your family vacation budget if you aren't careful, and amenities like a meal and plenty of room for extra carry-ons is a thing of the past if you expect them to come with the purchase price of your ticket.

Let's explore five ways you can find the best plane fare for the whole family. Knowing a few tricks will help keep your money in your pocket -- so you'll have a little extra to spend on fun stuff once you get where you're going.

Avoid Flying on the Weekends

Don't groan. Weekend airfares are more expensive because there's heavy competition for those seats. It's hard to sacrifice a whole vacation day to travel during the week, but you can save money and probably some hassles as well. Avoid that block of time from Friday afternoon to Monday morning. Think of it this way: If you travel during a weekday there'll be fewer lines, people will be less stressed (and therefore more genial) and you'll have a little extra time to do things like pack efficiently and remember to take out the garbage before you leave home. The plane may even be less crowded, which means you might be able to get through the first leg of your holiday without having to apologize (much) for anything your darlings may do during the flight.

When you're trying to corral a spouse, kids and various belongings, the idea of a non-stop flight is pretty appealing. You can just settle in and sit tight until you get where you're going. You usually pay for the privilege, though. Choosing an itinerary that includes at least one connecting flight will save you money. This doesn't necessarily have to be a brutal compromise, though. Just make sure you have at least an hour between flights if you're dealing with a multi-terminal airport. You might also consider doing a Google search for the layout of the connecting airport involved. It might give you a good idea of how difficult it could be to get from point A to point B. 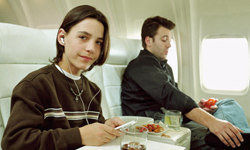 If you fly during peak meal times, you can cut back on the cash.
Photodisc/Thinkstock

It's a lot harder to get a meal on an airline these days, but signing up for a flight that takes off around mealtime is still a good idea. Experienced travelers recognize they'll likely be eating before or after a flight, so they work travel into their normal dining routines. To keep the big silver birds full to capacity, some airlines offer their least expensive fares either first thing in the morning (usually around the time the sun comes up), at noon or during dinnertime. If you pick one of these times to fly, you'll keep some cash in your pocket where it belongs. You don't want junior's rumbling stomach to attract too much attention, so eat early -- or bring snacks.

The airline industry is super-competitive, and you never know who'll have a great deal on offer. That's why it pays to do some advance recon before you absolutely need to buy plane tickets. You don't have to be the Lone Ranger spending all your evenings hopping from site to site looking for bargains, either. Many of the major airfare listing sites will alert you when prices go down on a fare you're interested in. The query criteria you can specify may be limited, though. Although you might be able to stipulate that you're only interested in, say, direct flights to your destination, don't count on it. You might have to make do with a general query and then evaluate the e-mail updates based on your wish list of flight features. The process is still worth a try, though. Here are some candidates you might want to explore:

The airlines can be pretty cagy, so you have to get cagy yourself to score good deals. Here's an example: When you shop for airfares online, deals can change depending on the time of day you're surfing the net. That's right! The "when" of shopping for a travel deal matters. The money savings might not be spectacular, but those extra dollars could mean the difference between enjoying one more nice lunch at a sit-down restaurant and milling around an outdoor hotdog stand on the last day of your trip. Try searching for online travel bargains early in the morning and late at night.

It also pays to be creative when you're buying multiple tickets. If an airline has two cheap seats left on a flight and you need four seats total, you're likely to be quoted the higher rate for all four seats instead of being offered a two and two split. To make sure you're getting the best picture of what's really out there (so you can be the one who strategizes the seating arrangements), check for single seat pricing to see if you can work a deal for at least part of your airfare.