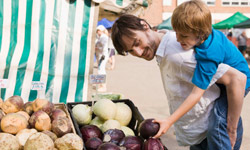 Turn a necessary outing into something fun -- or at least educational -- or at least not miserable. See more parenting pictures.
Jupiterimages/Getty Images/BananaStock/Thinkstock

According to historians, the Greek philosopher Aristotle imparted wisdom to his students as they strolled the gardens of his school. It's quite possible that he also took them to the public forum and marketplace, the agora, not only to participate in debates, but to do a little shopping, too.

We know, most guys today don't rank shopping as high as things like camping or even cleaning out the gutters for father-son bonding. But, wise man that he was, Aristotle may have intuited what modern studies have shown: Having a caring, involved father figure benefits kids, especially boys, from birth onwards. It promotes feelings of security and self-confidence. It increases kids' chances of developing happy, healthy relationships and succeeding in school, and it decreases their likelihood of engaging in violent behavior or crime.

Some findings have suggested that being a father figure has benefits, too. In one study, men who engaged in unhealthy habits like smoking tended to give up them up after becoming dads.

It doesn't take a Greek philosopher to figure out that fathers and sons have to buy stuff occasionally. Why not seize the opportunity? In the following pages, we offer five tips for father-son bonding while buying. But note that we use "father" and "son" only for linguistic convenience. The ideas that follow apply to any father figure, including but not limited to a stepfather, foster father, grandfather, big brother, uncle or Mom's significant other.