5 Electronic Gadgets for the Whole Family to Use

by Garth Sundem
Prev NEXT
2 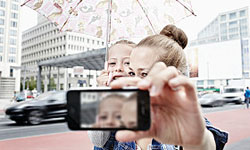 In April 2011, The New York Times reported that the once-popular Flip video cameras were stopping the production lines. Cisco Systems sold 2 million units in 2007 and 2008, but by 2011, the device was already obsolete.

The culprit? The smartphone. The appeal of the Flip was that you could take it with you anywhere, and now smartphones -- which you already have with you everywhere -- almost universally come equipped with the ability to shoot video.

This is cool enough in itself: You can capture your kids' precious moments, and they can shoot and post to Facebook video of you snoring like a bear at 9:30 a.m. on a Sunday morning. But add a computer of nearly any sort to the mix and you have the power to write, shoot and edit home movies, be they the documentary account of a family vacation or your kids' wildest zombie thrillers.

Use either your computer's pre-installed video editing software or consider trying a free editing software like AVS Video Editor or Window's Movie Maker, both of which are intuitive enough for use by most 9-year-old's (if not by their parents).