5 Bathroom Decorating Ideas on a Budget

by Laurie L. Dove
Prev NEXT
4

Shower It with Details 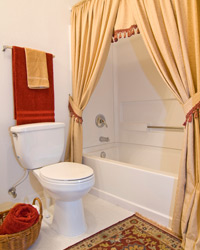 Adding height, fringe details or even a dramatic, window treatment-style split to your shower curtain can refresh the room for little more than the labor required. If you can't sew, pick up some hemming tape or fabric glue.
iStockphoto/Thinkstock

A shower curtain is to your bathroom what a fireplace is to your living room: It's the center of attention, so make it count. Start by replacing the straight-as-an-arrow bar that holds the shower curtain for a chrome, brushed nickel or oiled copper convex shower curtain rod. It doesn't take up more space that the traditional version, but seems to add miles of elbow room from inside the shower [source: Apartment Therapy].

If your bathroom has a high ceiling, play it up by placing the bar higher up on the wall. You can always glue or sew coordinating fabric to the bottom of a shower curtain to accommodate the new height. In fact, adding a few DIY details like ready-made ruffled fabric or beaded trim to a standard (read: inexpensive) cotton shower curtain is a great way to get an Anthropologie look on an Old Navy budget [source: House and Home].

If you're feeling really creative, you could make a shower curtain out of two (or more) terrycloth bath sheets. Bath sheets are typically 72 inches (1.8 meters) in length, which is conveniently the same length as a standard shower curtain, so you won't need to hem them. It only takes a few minutes (and a few dollars) to install grommets in the towels' edges and hang them using curtain rings [source: Martha Stewart]. You could do the same to create an inexpensive window treatment. The terrycloth is cozy, plush, easy to clean and -- if you decide to stencil it with fabric paint -- a design all your own.