10 Ways Big Families Can Save Money

by Chris Warren
Prev NEXT
3 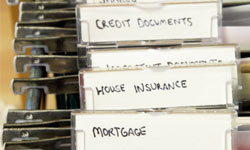 Keeping all of your bills and important documents organized will help you stay on top of payment due dates so you don't fall behind.
iStockphoto/Thinkstock

If there's one word that can best describe a household with lots of people in it, it's chaotic. Without a concerted effort to stay tidy and organized, school books and projects can pile up and get mixed in with utility bills and credit card statements -- a recipe for an expensive disaster. "If you let bills pile up and don't keep track of due dates, you will most likely at some point pay a bill late," says Allison Flinn, a professional organizer. "Avoid paying late fees by setting up a time once a week to review and pay bills."

Flinn also argues that a messy, cluttered house presents an opportunity to generate some extra money while also getting some of the peace of mind that comes from having an organized house. "If your home is cluttered with stuff you are not using, sell it," she says. "If you're not using items, you won't miss them."

Read on to see how being mechanical -- or at least being willing to learn -- can yield big savings.