by Christine Venzon
Prev NEXT
7 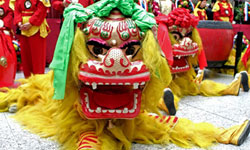 If you're in western United States in the spring, you can go to San Fransisco's Chinese New Year Parade. It's the biggest one outside of Asia, with a 200-foot-long Golden Dragon and 600,000-firework grand finale [source: San Francisco Chinatown]. Or you can go to Butte, Mont., for one of the smallest Chinese New Year parades, with a 60-foot dragon, 10,000-firework grand finale, and warming refreshments provided by the local Chinese heritage society [source: Mai Wah Society].

If you're in the Southeast, you can celebrate Mardi Gras all weekend in New Orleans -- yes, there are family-friendly festivities -- or in Iota, La.., (population 1,400), where the merrymaking starts at 8:30 a.m. and shuts down at 5:00 p.m. [source: Jefferson Parish, Iota Mardi Gras Association].

Then there's the Gathering of Nations Native American Powwow in Albuquerque in April ....

The point is, wherever you are (or go), you're apt to find cultural groups that are happy to share their traditional festivals with their neighbors for free -- or nearly so. What better way to learn about the world's kaleidoscope of cultures than by munching their food, listening to their music and admiring their crafts?

Just as culture happens everywhere, so does history. Our next suggestion explains how to use that fact to your vacationing advantage.