What are some common ATM scams? 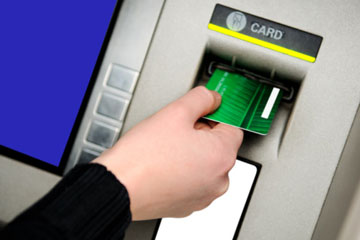 Be cautious at the ATM -- there are several scams thieves can use to steal your money. See more pictures of money scams.
Hemera/Thinkstock

Double swiping. Grabbing. Skimming. The terms sound a lot like the phrase "money-grubbing." And that's exactly what they mean, except in these scams, no one actually clutches a stack of bills in his fist. Aside from actually sticking a gun in your face and taking your cash, these are the primary methods by which thieves separate you from your money at an ATM.

Double swiping, the oldest, most common method, involves a waiter or a store employee taking your card at the cash register, swiping it in the correct device, then swiping it in a second device that captures the card number.

A few years ago, grabbing was in vogue. In grabbing cases, a thief would affix a device (or sometimes just chewing gum) to a card reader, which would grab the card so that the owner couldn't remove it. Sometimes, in a more elaborate scam, the thief would offer to help the stuck consumer, suggesting that he or she try to enter the PIN a few more times while the thief observed and memorized it.

These days, skimming is all the rage. Thieves install counterfeit readers in ATMs to capture card information, and they use tiny cameras or fake keypads to capture PIN numbers. In a recent case, nearly 300 people lost card numbers and PINs at a gas station ATM in Sierra Madre, Calif. They lost nearly $82,000 altogether. The gas station closed abruptly at the end of 2010, and police have asked all customers to double-check credit card and bank statements.

"It's a clever crime," says Gil Luria, an equities analyst at Wedbush Securities in Los Angeles who tracks the ATM industry. "I wish the people who are smart enough to do that would get a real job."

The U.S. Secret Service, which investigates these types of electronic crimes, recommends that consumers make sure their cards are only swiped once when they make purchases and that they cover the keypad when they enter their PINs.

Meanwhile, the ATM industry is coming up with ways to stop the crime. The latest technology involves making the card slots vibrate to baffle efforts to read the magnetically recorded information.

For more information on ATMs and ATM scams, check out the links on the next page.