Browse the article What happens if you're in an accident with an uninsured driver? 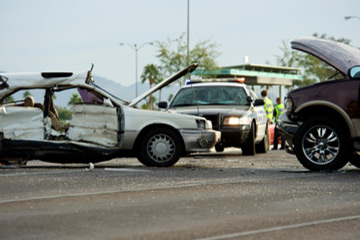 Car accidents are bad enough, but an accident with an uninsured driver could be disastrous. See more Car Safety Pictures.
Brian Stablyk/Getty Images

Craaaaaaash! Your car has been knocked sideways by another car -- one that roared through that stop sign right before it hit you. This was no mere fender-bender: Your car is a wreck and you're trying to figure out if you're OK. But if nothing else, at least the accident wasn't your fault. The other driver's insurance will pay for whatever's wrong with your car -- or your body.

Or will it? What happens if the other driver isn't insured?

Most states require vehicle owners to have automobile liability insurance, but many drivers manage to get around the law. Some people buy insurance long enough to get their vehicle registered, and then cancel the policy. When the economy is bad, the number of people who try to get by without liability insurance goes up.

A 2011 study by the Insurance Research Council found that in 2009, about one of every seven drivers was uninsured. That's about 14 percent nationwide. But insurance laws vary from state to state, and so does the incidence of uninsured drivers. In Mississippi, the study found, the rate of uninsured drivers was a national high of 28 percent, followed closely by New Mexico, Tennessee, Oklahoma and Florida. The states with the lowest (best) percentage were Massachusetts, Maine, New York and Pennsylvania [source: Insurance Information Institute].

So, what happens if the other driver in an accident isn't insured?

Much depends upon the laws in your state. If you're in a state with traditional tort (civil wrong) insurance laws, the insurance of whoever was at fault is supposed to pay. If you were at fault, your insurance will pay. If the other driver doesn't have insurance, chances are he or she also doesn't have a lot of assets. A lawyer can help, but you may not be able to recover damages even if you win a lawsuit.

There is a way to protect yourself from having to bear all the costs if you're hit by an uninsured motorist. You can pay extra to add uninsured or under-insured motorist coverage to your policy.

If your state has no-fault laws, each driver or his insurance pays for that driver's and his passengers' injuries or damages, no matter who is at fault. There's a catch, though: No-fault laws restrict your ability to sue. The bottom line is this, though: You're covered, and it doesn't matter whether the other driver was insured – unless you suffer really major injuries. Most no-fault states allow you to sue the other driver for severe damages. If you have added uninsured motorist coverage to your policy, that should help get more money from your own insurer, even if suing the uninsured at-fault motorist doesn't bring you financial relief.

I was particularly interested in this assignment because a good friend of mine had been injured – and her car totaled – in an auto accident caused by an uninsured driver. This was in a tort state. My friend was out of luck. It would have done no good to sue the uninsured driver because that person had no assets. My friend's own insurance company was not going to pay because the accident was not my friend's fault.

In my research, I learned that my friend's problem was not unusual. There are a lot of uninsured drivers, and if you are unlucky enough to get into an accident caused by one of them, you may be in a bad situation. One of the most important things I learned is that you can pay to add uninsured motorist coverage to your policy. I also learned such coverage might be worthwhile even in a no-fault state.